Chicago is located in the Midwest and is the largest city in Illinois, the third largest metropolis in the United States with a population approaching 3 million. Chicago is a vibrant city and a large metropolitan area which extends for almost 11.000 km².

Known for music, the city also offers numerous world-famous art and science museums. To spend wonderful days in the open air there are long sandy beaches, huge parks, shops and many restaurants, as well as impressive architecture with endless cultural attractions.

Ambitious, resourceful and hardworking, Chicago was built with the influx of over a million immigrants in less than a century. In the historic center of the city, Greeks, Italians, Chinese, have given their name to a mosaic of neighborhoods populated by various ethnic groups. Chicago retains a great zest for life, a taste for innovation, good food and warmth. Tall but not haughty, it can be discovered on foot, with the nose up to see its architectural jewels.

What to see in Chicago

It is home to more than 1.500 species of marine life, including 32.500 fish, as well as an array of birds, insects and amphibians. Completed in 1930, the aquarium receives more than two million visitors annually, which makes it one of the most visited aquariums in the United States. The exhibits are organized in thematic areas such as the "Caribbean Reef" and the award-winning "Amazon Rising". The Oceanarium, which features dolphins and beluga whales, is one of the aquarium's most visited exhibits.

The Field Museum of Natural History was built for the 1893 Columbian Exposition held in Chicago. One of the most famous attractions in the museum is one skeleton of the largest T. Rex never found.

Located in Grant Park, Buckingham Fountain was designed by architect Edward Bennett inspired by the Latona Fountain in Versailles. The fountain is famous for its size and the height of its spray, which can reach a height of over 15 floors. The four seahorse statues in the fountain are said to represent the four states surrounding Lake Michigan, while the fountain pool symbolizes the lake itself.

47 meters high, the Chicago Water Tower played a vital role in the city's water system. In 1871, a fire destroyed the entire business district of the city. One of the few surviving structures from the infamous Great Chicago Fire was the Chicago Water Tower today symbol of the city's resistance. Today, the beautiful structure houses the City Gallery, which displays works by local artists and photographers.

At 344 meters high, the John Hancock Center is the fourth tallest building in Chicago. Located on the shores of Lake Michigan, the skyscraper offers panoramic views of the entire city. Completed in 1968, the 100-story structure, boasts a number of records, including the tallest indoor pool and ice rink in the world. Visitors can take the elevator to reach the Observatory located on the 94th floor, which has an open skywalk.

Although the skyscraper has lost its status as the tallest building in the world, the Sears Tower remains one of the main tourist destinations in Chicago. Completed in 1973, the 108-story structure has some of the fastest elevators in the world, taking visitors to the 103rd floor Skydeck in 70 seconds. The Skydeck it offers sweeping views of Lake Michigan and glimpses of the states of Michigan and Wisconsin. Visitors can experience "The Ledge“, A glass box that extends out of the building for a hair-raising view of the city below.

Millennium Park is made up of a civic center and a huge park of 100.000 m². In addition to the many points of interest and green lawns, it has modern steel and glass sculptures, including the ultimate must for those who want to take pictures in Chicago, the bean (properly known as Cloud Gate). The Pritzker Pavilion it is an area for outdoor concerts. A ice rink welcomes skaters in the winter and serves as an open-air restaurant in the summer.

A playground on the shores of Lake Chicago, Navy Pier includes gardens, restaurants and many attractions. Built in 1916, the 1.000-meter-long pier features a Ferris wheel, rides, and an IMAX theater. An ideal destination for families who want to enjoy wonderful days outdoors.

A section of Michigan Avenue that runs from Oak Street to the Chicago River. The Magnificent Mile is considered one of the best commercial districts in the world.

In 1900, the city reversed the flow of the Chicago River, creating an incredible engineering project. Through the installation of a series of canal locks, the water was directed to the Mississippi River instead of Lake Michigan. Today, the Riverwalk pedestrian street which runs along the south bank of the river and winds through the city center, it offers visitors a lush green space where they can stroll and admire the beauties of the city.

When to visit Chicago

II best period to visit the city is during the spring, summer and autumn. These seasons are full of special events and big festivals. January is the coldest month, with an average temperature of -0,6 ° C and July is the warmest month, with an average temperature of 28,9 ° C. Winters can be particularly windy in the Great Lakes region, so it is best to dress in layers.

Getting around in Chicago

Transport in the city is very good and efficient. Chicago's elevated train network (the "L") and bus network are extensive and serve not only the neighborhoods of the city but also some surrounding suburbs. The fare on public transport is $ 2 per bus and $ 2,50 per train. AND better to use public transport because the roads are very busy, moreover the parking costs are very high. 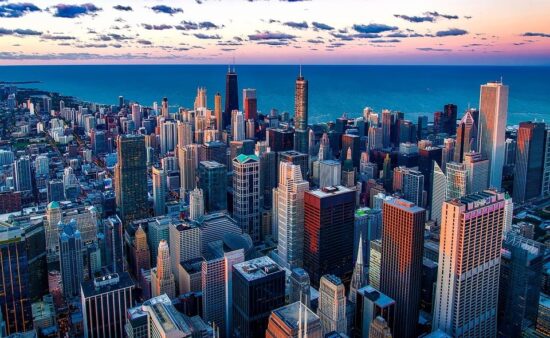