Asinara: what to see, how to get around and how to reach this paradise of Sardinia

I'm not sure why, but the islands that host (or have hosted) prisons have always been of great charm to me ...Alcatraz, Isle of If (that of the Count of Montecristo) and many others, and theAsinara is no exception. But if I have to say it all, the idea that this natural paradise was, until recently, the prerogative only of scum like Totò Riina and company singer made me nervous. Fortunately since 1997 the island of Asinara has become a National Park and it is accessible to all. 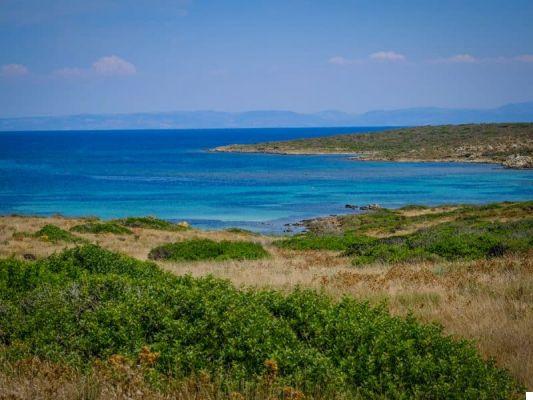 I'll tell you short, but I think it is important to know it in order to better understand the territory.

The island has been inhabited since prehistory, then there were Romans and it is still possible to see the wrecks of Roman ships carrying amphorae right in front of the port of Cala Reale. At the time of Maritime Republics it was disputed between Genoa and Pisa, after which it passed underneath i Savoia (in 1700) and when, in 1836, feudalism was abolished, it returned under the direct control of the state. In 1885 the Depretis government established one on the island agricultural penal colony and a hospital for the quarantine of tuberculosis patients (the building is still standing, a bit dilapidated but very charming). The inhabitants of the island were forcibly removed and many of them founded the village of Stintino.

With the I world war they were deported to Asinara the prisoners of war, mostly Austro-Hungarians (about 24000 prisoners!); the Austro-Hungarian chapel and the ossuary remain from this period. From the 60s until 1997, Asinara remained in total isolation thanks to the establishment of the maximum security prison in which the Red Brigades and Mafia like Raffaele Cutolo and Salvatore Riina who served here the 41bis (established in the 90s after the Falcone and Borsellino massacres). The isolation, however, allowed the preservation of a large part of the natural environment of the island (including the famous albino donkeys that give the island its name), avoiding the so-called overbuilding, and allowed the birth of the Asinara National Park. 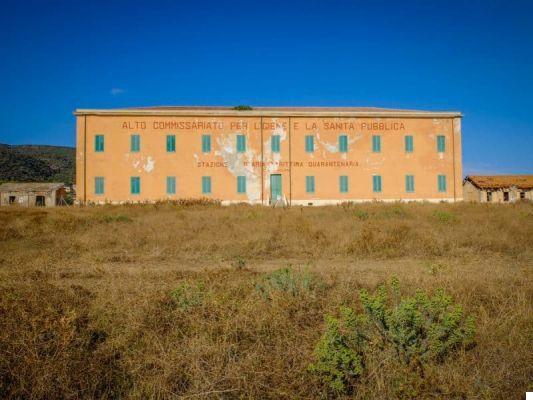 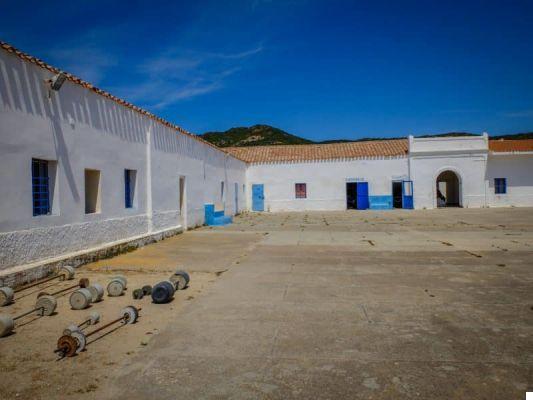 How to reach Asinara: ferries from Porto Torres and Stintino

The island of Asinara can be reached from Porto Torres or from Stintino. From Porto Torres ferries take about 1 hour and a half e arrive in Cala Reale, while from Stintino the crossing is much shorter and ferries arrive in Fornelli. You travel only on foot (if you want you can take your bicycle on) and you cannot take any means of transport.

The boats that ferry from Stintino to Fornelli are smaller. To find out the timetables, consult the following sites: SBSAsinara or Linea del Parco, call the contacts you will always find there. 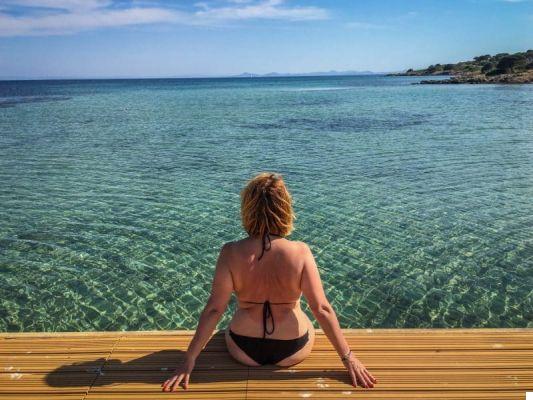 How to visit it

Being a National Park, all’Asinara you cannot travel with your own means (unless they are your legs or your bicycle), but you can take advantage of various services on site (you can find the complete list on this site http://www.visiteasinara.com/servizi.php).

The Asinara is 16 km long and it is beautiful to walk around, but this is strongly discouraged in the months of July and August because there are very few trees and the sun is around the corner (not to mention that there are only 2 bars in Asinara, one in Cala Reale and the other in Cala d'Oliva). There are 9 well-marked trails on the island (the Path of Granite, that of water, of Memory, etc.), you can find them all on this site.

Be careful because some areas of the island are in Total Reserve and it is not possible to enter them even on foot!

Asinara is not flat, but if you are fit you will have no problem getting around it by bike. However, calculate that in 1 day you will hardly be able to turn it all around. In the warm months, the same warning applies as before: there is very little shade and you will need to bring your supplies of water. Bikes can be rented (and returned) both in Cala Reale and Fornelli. For info and reservations consult the Windsurfinfcenter website.

If you have only one day available and you want to explore the whole island in total freedom, the best thing to do is to rent a small electric car. There are yes 2 o yes 4 fast and cost respectively 70 or 100 euros per day (yes, they are dear .. I know). We opted for this solution and we had a great time! The cars must be booked in advance (there are not many) and can be picked up in Cala Reale. To book them and for all other info you can call 079 512290 (Asinara Rent a Car).

From mid-July to early September there is a bus service that connects Cala Reale, Fornelli and Cala d'Oliva.

It is also possible to visit the island of Asinara in 4 × 4 off-road vehicles with some Geomarine Environmental Guides. Find all the info and contacts on this site.

To get a different perspective of the island you can go sailing, stopping in the coves that would be impossible to reach by land. I did it and I loved it! There are several companies with which it is possible to do this; I went on a catamaran with Antonio and Angela di AsinaraFun and I found myself very well.

The catamaran carries a maximum of 12 people, and I recommend you do the whole day (the indicative price varies between 60 and 90 euros depending on the season). We leave at 9:30 from the port of Stintino and then make various stops; in some you go ashore (for example in Cala Reale to see the sea turtle recovery center or in Cala Oliva to visit the prison), while in others you stop in some bays with crystal clear water (and at La Pelosa in Stintino) to bathe. The price also includes lunch on board including wine, seafood appetizer and a first course (a very good fregola with seafood), coffee and snack. We return more or less around 18:00. Find all the detailed info on the site. They also organize a beautiful sunset excursion to La Pelosa from 18:30 to 22:00 with dinner included. 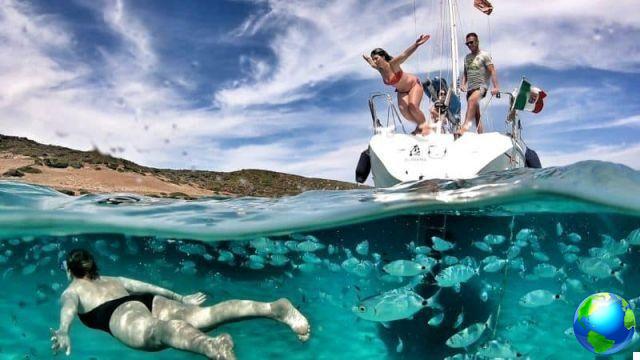 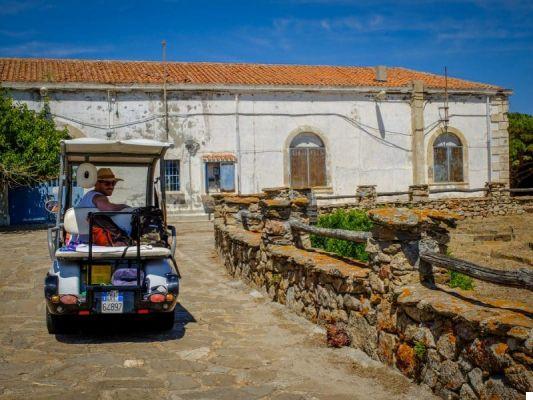 What to see on the island of Asinara

Cala Reale is the main port of the island (it's microscopic eh, don't expect the port of Genoa!) and this is where it docks coming from Porto Torres. Here are several buildings that date back to the time when Asinara was a penal colony and a lazaret and the so-called Royal Palace (belonged to the Savoy family) where now there is the headquarters of the Asinara National Park. Here are the car and bike rentals and one of the 2 bars on the island. A few steps from Cala Reale there is also the Asinara Sea Turtle Recovery Center (CRTM), which can be visited and is very interesting. You can see the turtles being treated here (if there are any at that time) before being released into the sea and they explain the various activities that are carried out by the center. Immediately behind the center there is then FarmAsinara, where natural cosmetics are produced starting from the spontaneous plants of the island, donkey milk and processing residues of natural products (sea urchin shells, etc.). I bought several soaps and oils and was super happy when I discovered that they also sell them online !! 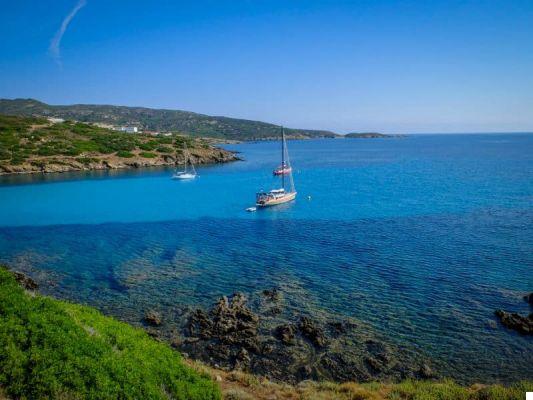 Cala d'Oliva is located in the north of the island and that's where it is the only town of Asinara, the only inhabited center with a bar / restaurant / pizzeria (called L'Asino Bianco), the SognAsinara hostel, a small church and, high above the village, the buildings of the former penal colony and the bunker of Totò Riina. The former penal colony it can be visited (free admission) and in the old prison rooms there is a nice one museum, small but well done. The former bunker where Riina served 41bis for several years it is run by Libera, Don Ciotti's association against the mafias and, from what I understand, it is very rarely open.

Around Cala Oliva there are also coves with magnificent beaches such as Cala dei Detenuti, Sa Murighessa, Cala Giordano and Punta Sabina (reachable with a footpath in about 30 'or by off-road vehicle). I have also inserted them between the 10 most beautiful beaches in Northern Sardinia. 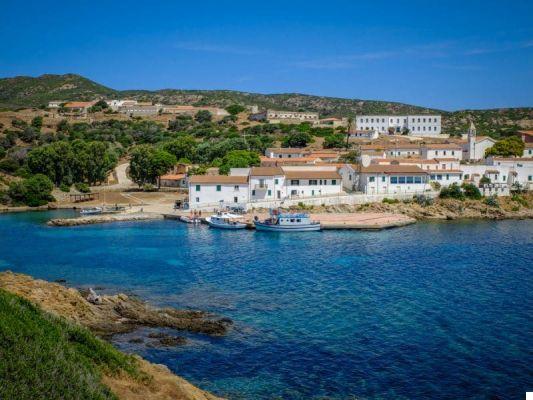 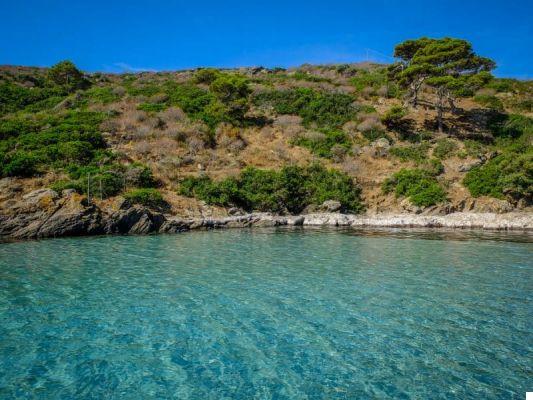 The Fornelli area is located in the southern end of Asinara, and here is one of the former high security prisons (there were several on the island). Until 2016 it was possible to see it now it is, alas, in a state of neglect. Above the former prison you can see the ruins of a fortress (the Castellaccio) which can be reached on foot with the Castellaccio path which starts immediately behind the prison. The road that comes to Fornelli from Cala Reale is magnificent, there are incredible landscapes and some sporadic construction (such as the ossuary e other prison camps). Some stretches of the magnificent coast that can be seen from the road (including beaches) is a Total Reserve Area and therefore inaccessible. 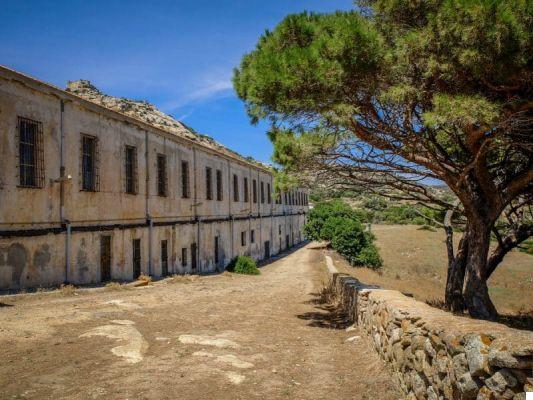 Where to sleep in Asinara

Until recently there was only one accommodation facility in Asinara, now there are 2!

Where to eat at Asinara

There are only 2 bars / restaurants: the SognAsinara Bar / Restaurant in Cala Reale (for info or reservations call 3461737043) And the L'asino Bianco bar / restaurant / pizzeria in Cala d'Oliva (for info or booking, call 079 409401 o 3472729036). In general, if you plan to spend a day on the Asinara, you should bring your own food directly from home, to be able to eat anywhere in total freedom. 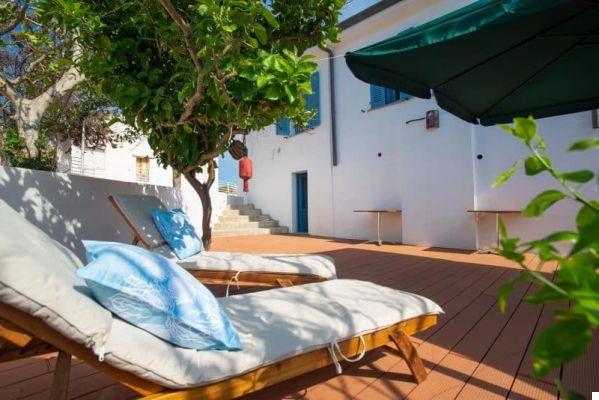 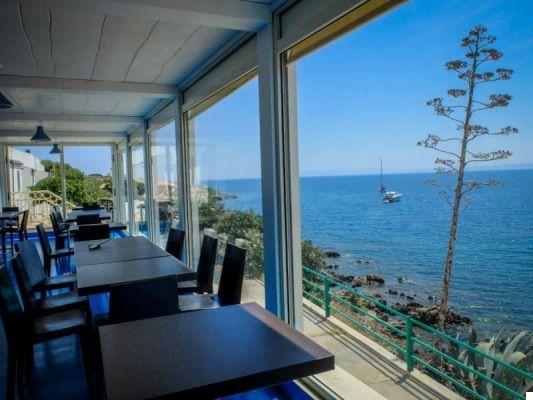 The 10 least touristy and most beautiful Greek islands ❯

add a comment of Asinara: what to see, how to get around and how to reach this paradise of Sardinia