Who among you does not know Mykonos, Santorini or Corfu? All beautiful islands, but often chaotic and full of tourists. If you are looking for a more authentic Greek island I propose you 10 Greek islands less touristy but beautiful that could be right for you!

It is really difficult to choose among the hundreds of Greek islands scattered between the Aegean and the Ionian Sea, but I have tried to select 10 Greek islands among the least known and often ignored by tour operators (thank god I would add!) That will allow you to spend whole days in clear and turquoise waters without crowds (even in high season) and will give you a magnificent journey to discover the most authentic Greece.

Amorgos is the easternmost of the Cyclades and the last one starting from Piraeus, and it is perhaps precisely for this reason that it has remained almost uncontaminated until today. It is a mountainous and quite small island (it is just over 30 km long and 6 wide) that offers fascinating and barren views that made Homer define it as the “naked island”. Among the many beaches, the most beautiful and the most famous is certainly Agia Anna, on the east coast of the island which, not surprisingly, was chosen by Luc Besson to shoot his film “The Big blue” with Jean Reno. Absolutely not to be missed is the Chozoviotissa Monastery, the "jewel of the Aegean Sea", a marvelous construction carved into the rock overlooking the sea, reachable by climbing a long and beautiful staircase, and the 'capital' of the island Chora. Built in the center of the island to hide it from the sight of pirates who came from the sea, from its fortress the view embraces almost the whole island and you can take magnificent photos at sunset. You can learn more about the topic in the article I dedicated to him What to see in Amorgos, the gem of the Cyclades. 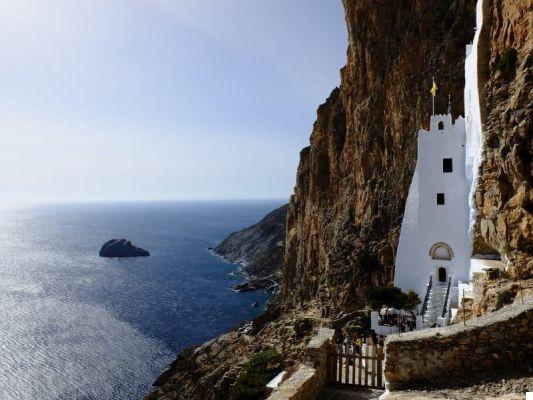 Ikaria (in Spanish Icaria or Nicaria) is a narrow strip of land beaten by the winds between Mykonos and Samo and is one of the largest islands in the northeastern Aegean (270km² and 255km of coastline). Ikaria is a legendary island because its name is believed to derive from the myth of Icarus, who, according to legend, fell into the sea off the island when his wax wings melted. Along with Thessaly, Lesbos and the Ionian islands, Ikaria is traditionally one of the strongholds of the Greek left because during different historical periods the island was used as a place of exile for political dissidents, especially communists, and still today it is defined as an anarchist island, an island out of the crowd compared to the most obvious tourist destinations. In recent years it has been developing as spa tourism destination thanks to the hot springs on the south-eastern coast of the island, but it is also a paradise for lovers of nature in general, trekking, cycling, surfing and climbing (the mountains reach almost 1.000m in height). 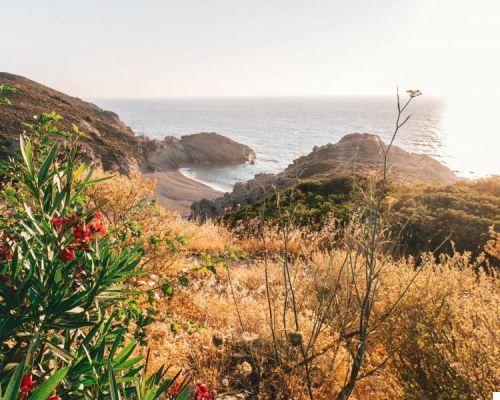 This tiny island is just over a nautical mile from Paros and it represents the perfect destination for those who want to get away from the tourist crowds of its neighbor (dedicated, on the contrary, to those who love lively nightlife). Antiparos it has a typically Cycladic and intimate light and landscapes, refined style hotels, an interesting traditional village paved and surrounded by walls, and the sea, transparent and bright. Despite the relatively small size, the its golden sandy beaches (Livadia, Kako Rema, Vathis Volos and Soros) they are not crowded even in the middle of August! Among the attractions of the island it is impossible not to mention the Antiparos cave with stalactites and stalagmites and a daily excursion in caique to the uninhabited, but archaeologically rich, island of Dhespotikò. 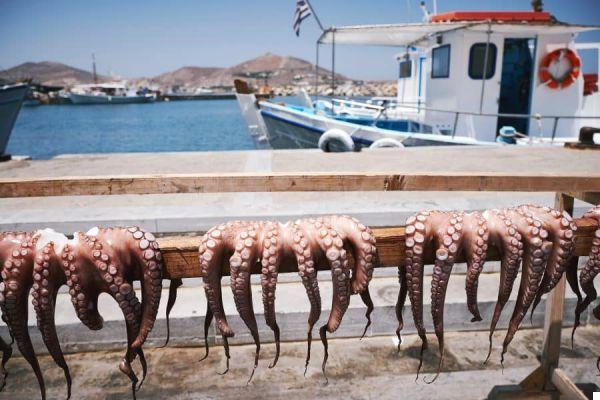 Alonissos is part of the Northern Sporades and it is the largest and the only permanently inhabited area of ​​this small archipelago (the inhabited area of ​​the island actually corresponds only to the southern part). It is the most rugged and wild of the others, but no less green: pine forests, olive trees, fruit trees and dense arbutus bushes cover a large part of the island. Probably due to its marine park status, Alonissos is surrounded by one of the cleanest seas in all of Greece and even if its beaches rarely reach the beauty of the more famous Skopelos and Skiatos, their white pebbles greatly increase their transparency. Rousoum is considered the most beautiful beach on the island, while one of the quieter places is certainly the neighbor Votsi village, formed by the characteristic white houses located between the cliffs. 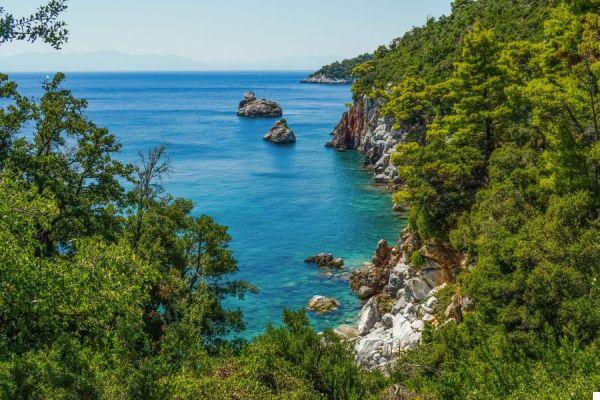 The island of Hydra it is one of the easiest to reach from Athens (you can get there with 2 hours by hydrofoil) and it is also one of the most atmospheric destinations in all of Greece (I am madly in love with it !!). Its small port and the main town are totally free of traffic (bicycles are also banned) and motor vehicles cannot circulate throughout the island. Hydra is considered the Capri of the Greeks, muse of many international artists such as Leonard Cohen, Henry Miller and Mike Jagger, she is very popular with the Athenian jet set. Chic, intimate and sophisticated, Hydra has never lost the sly and relaxed air common to many other Greek islands. Hydra town with its stone mansions of the wealthy merchant families and its houses with white walls and red tiles is a wonderful sight, as are the small beaches of Kastéllo and Vlyhos. The interior is mountainous and little visited and with a few steps it is possible to discover a completely different island, made up of country houses, monasteries and terraces planted with wheat. You can learn more about the topic in the article I dedicated to him What to see in Hydra, the car-free island of the Peloponnese. 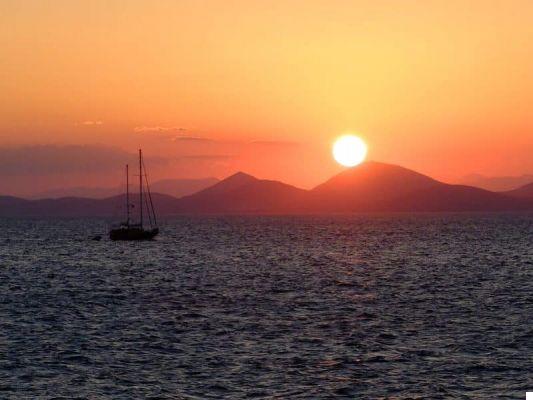 Anafi is part of the Cyclades and it can be reached with two hours by ferry from the famous Santorini, but also from Piraeus, Ios and Paros. Less than 300 people live on the island and the name of the island is linked to the myth of the Argonauts who, according to Greek mythology, sheltered here from the storm with the help of Apollo. Anafi has only one inhabited center, Chora, made of white houses and narrow alleys, built on the side of a hill on the top of which are the ruins of a Venetian castle. A 2 km long road connects it to the port of Agios Nikolaos (where ships from Piraeus dock) inhabited only in the summer months, as is the Kastelli village, on the east coast. The island boasts 35 km of beach, mostly unspoiled, accessible on foot or by boat. Among the most important are Katsouni, Prassies and Agioi, Anargyroi  and the latter, with its red sand and transparent sea, is a real natural jewel to be enjoyed in complete silence. In general, the most beautiful beaches are found in the southern area of ​​Anafi. If you are a lover of tranquility and simplicity, Anafi is the perfect island for you. 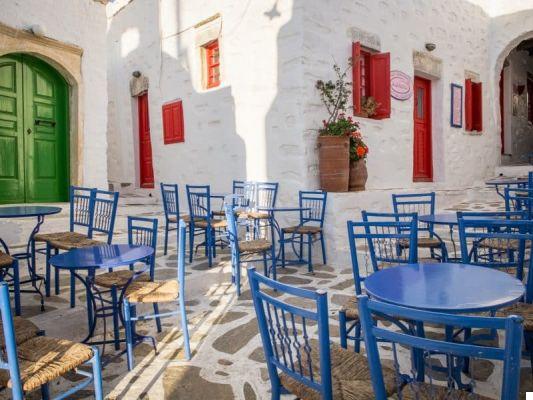 folegandros (in Spanish Policandro) is located 40 north of Santorini and is a very small island that can also be explored on foot. Renamed by some "the island of couples“Folegandros is very romantic and contains absolutely fairytale landscapes and panoramas. Greek journalists speak of one new Mykonos in the making, but just get away from Time, the main city, to discover that nature remains almost untouched, with donkeys still being the most used means of transport (on much of the island the terrain is too steep for vehicles). The most beautiful beach in Folegandros is Katergo, an expanse of 300 meters of gravel with two islets in front, on the south-eastern tip of the island, but the most spectacular is Meadows, a beach of pebbles and white pebbles with turquoise waters, inserted in a natural context of rare beauty (accessible by sea or via a mule track). 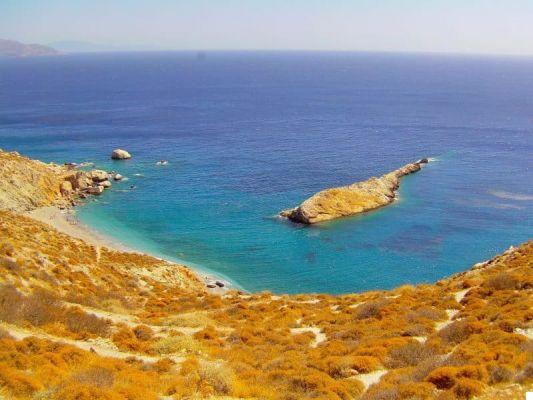 Among the Greek islands that are not very touristy but really beautiful there is also the small one Nisyros, a jewel of the Dodecanese which is located halfway between Kos and Tilos, and a few miles from the Turkish coast. It is often visited on a day trip from Kos or Tilos (it can be reached by 1 hour by ferry from both), but it deserves much more. The island is mountainous, but in the center it is actually empty, carved out of a huge crater with several chimneys and still smoking cones. The volcano of Nisyros it is the main attraction (it is the most recent active volcano in Greece), but there are also many other interesting things to see. Surely Mandhraki, the largest town, dominated by the cyclopean walls of Paleokastro which date back to the XNUMXth century BC (!!), but also the beautiful villages of Nikia e Emborios. The beaches are few and mainly of black sand, but they are very suggestive (above all do not miss the wild ones Lies ed Amnos, much loved by campers / hippies and nudists).

The stony Ithaca, homeland of Ulysses, is well suited to the description that Homer made of it: “an island without large plains and pastures, rocky, impassable to horses, an island good for the breeding of goats”. However, its literary fame does not correspond to its tourist notoriety. Ithaca is in fact a rather rocky island that does not attract the laziest travelers, but which can instead reserve unexpected surprises thanks to some beaches of rare beauty (Sarakiniko and Skinos) and places mentioned in the Odyssey (such as the Cave of the Nymphs, the Fonte Aretusa or the Alalcomene). Despite its proximity to Kefalonia, Ithaca has not been spoiled by tourist development and boasts, among other things, one of the most idyllic promenades in all the Ionians (in the main port of Vathy). 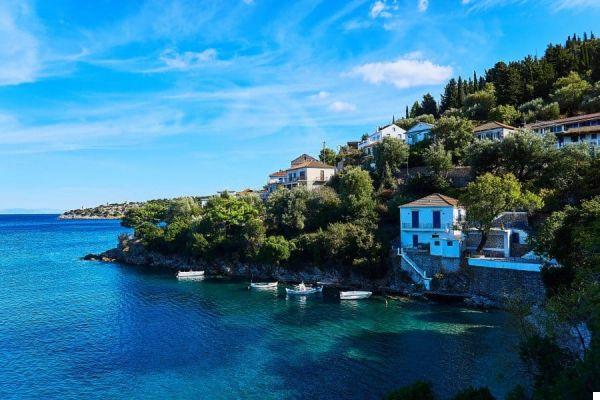 I close this article on the less touristy and more beautiful Greek islands with Leros, another magnificent island of the Dodecanese, located north of Kalymnos, also very close to the Turkish coast. Leros is an island that I would define as sought after but not posh nor expensive as Mykonos or Santorini, with many beautiful restaurants, shops and clubs (for this aspect it reminded me of Hydra). It is still an authentic island and is much loved by both Greeks and a number of French "aficionados" who have frequented it for many years (among these were the lawyer Agnelli). Leros is a jagged island, with many inlets and coves; the most beautiful beaches are those of Panteli, Plefouti, Agios Kioura e Xirokambos and, even when the Meltemi blows, you can always find a protected bay. Not to be missed Agia Marina, with the beautiful castle of the Knights of Rhodes and the church on the water of Agios Isidoros. 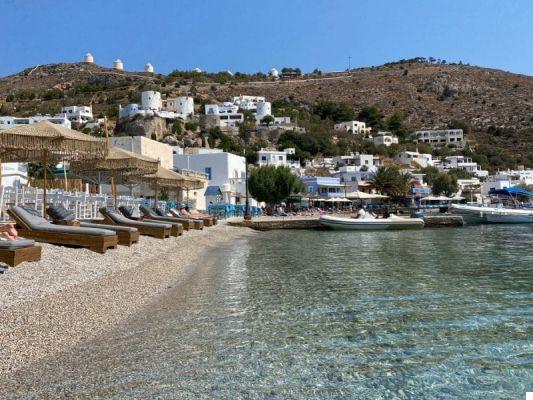 You may also be interested in these other articles on Greece:

The wonders of the Andaman (Thailand): the Similan and Surin islands ❯