“Rome is the capital of the world! The entire history of the world is linked to this place ”, said Goethe. In fact, in Rome it is enough to raise your head, go underground or turn the corner of any street to come across something extraordinary. I was born in Rome and lived there for almost 30 years but my city has never often to amaze and fascinate me. Every time I go back I always try to find new places, constantly looking for an unusual Rome, far from the iconic beauties of the Colosseum or St. Peter's, and in this article I am talking about these places. Of course, before going to discover these places ... I hope you have already seen the MUSTs (anyway you can find them all in the article on What to see in Rome in 3 days).

NOTE: for a tour of the iconic beauties of Rome such as the Spanish Steps, Trevi Fountain, Piazza Navona, etc., I recommend you book this 2h free tour which starts right from Piazza di Spagna.

Il MAAM or the Museum of the Other and the Elsewhere (or Metropoliz) is a truly unique place: it is the first inhabited museum in the world! It is a "living" museum, both because it is physically inhabited by 200 people, and because it is in continuous and constant evolution. The MAAM was born in 2009, when a large group of migrants and precarious workers from all over the world occupies the former Fiorucci factory (now abandoned) on Via Prenestina. Since then many artists have begun to support the cause of the Roman movement that signed the occupation (the Metropolitan Precarious Blocks) and to create works and / or installations inside the factory to protect it from the imminent forced eviction (to date not yet happened Fortunately!). Today the MAAM holds more than 400 works inside, among which Michelangelo Pistoletto's "Venus of the Rags" stands out !!

Open to the public only on Saturdays 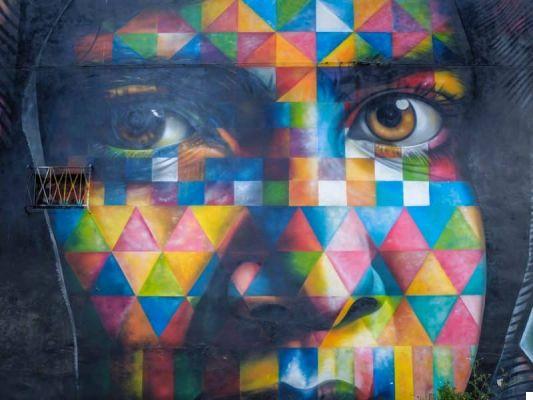 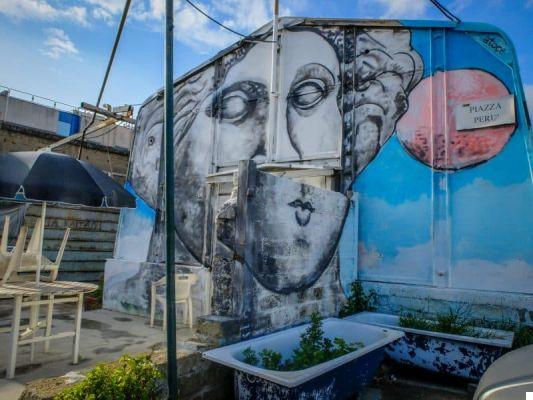 As has been the case for some time in many other European cities, several have been born in Rome in recent years urban, social and cultural redevelopment projects that have had street art as a focus. Among the most interesting examples there is certainly the Tor Marancia condominium museum, born in 2014 thanks to a Memorandum of Understanding between the Ater of the Municipality of Rome, the Cultural Association 999 and the Municipality VIII. The project was conceived with the conviction that public art can be an integral element of the regeneration of public housing and the cultural growth of its social fabric. On 11 social housing buildings and Tor Marancia 22 artists from 10 countries several have therefore created their works, transforming the neighborhood into a beautiful condominium museum. 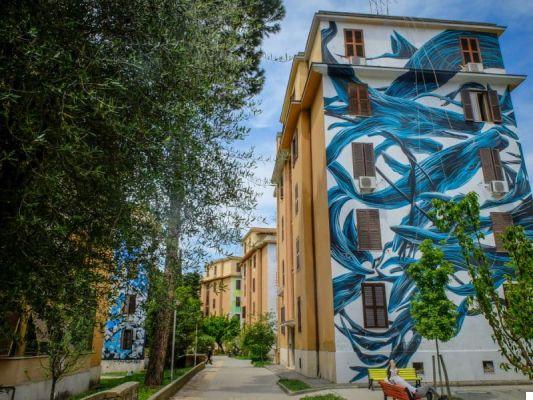 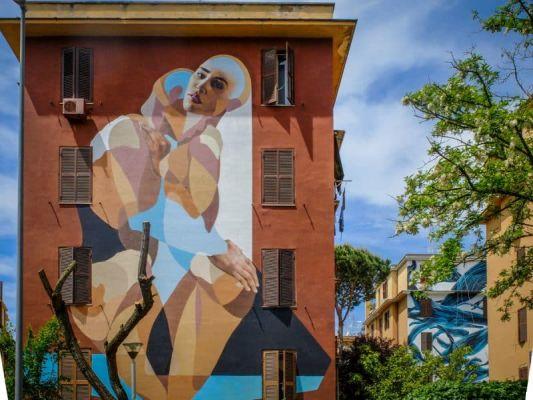 La Home Hendrik Christian Andersen Museum It is in the Flaminio district, in a palace that was built between 1922 and 1925 to a design by the same naturalized American Norwegian artist. The building was bequeathed by the artist to the Italian state in 1940 and since 1999 it has been part of the museums managed by the Lazio museum complex. More than a museum, it is one plaster cast collection where the monumental statues, portrait busts and project-drawings that Andersen made for the World Center of Communication are exhibited, a center that should have been built near Ostia (but which was never built). On the ground floor there are the Gallery, that is the exhibition representative room, and the Studio, that is the atelier for the conception of the works and the modeling of the forms. We also visit the artist's apartment on the first floor which is now used for temporary exhibitions. I love plaster casts and found it very beautiful. 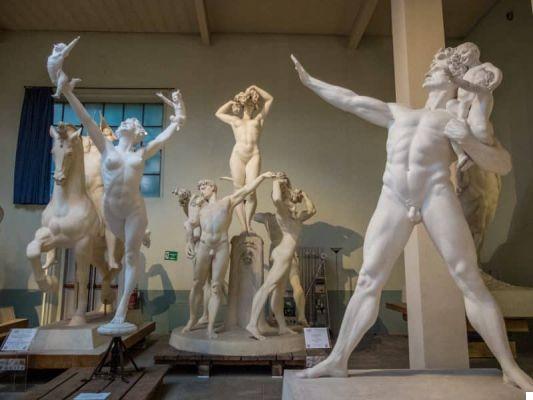 The Garbatella district is 'closed' between via Ostiense and via Cristoforo Colombo and it is a sort of "village district" detached from the tourist central districts of Rome and from other much more chaotic areas of the city. In fact, it was born as village-garden in 1920 to create low-density housing and surrounded by greenery for the working class who worked in the nearby industrial center of Via Ostiense. The architecture used is called baroque and refers to the minor Roman architecture of the '500 and' 700. Garbatella today it is still a neighborhood with a popular soul, and if you go for a walk in the maze of streets that start from Brin Square you will not feel like you are in Rome, but in a small town made up of villas with gardens. If you are looking for true Romanism ... this is the place for you! 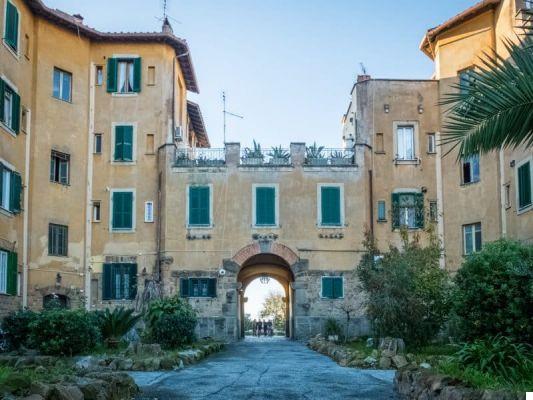 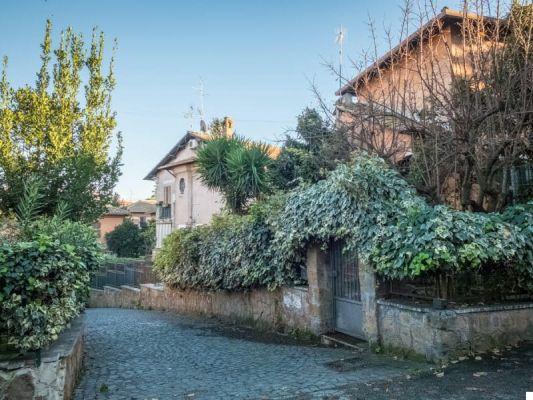 There are places that make your heart ache to visit them, and the Museum of the Mind it is definitely one of them. This museum is located in one of the pavilions of the hospital complex of Santa Maria della Pietà; born as a hospital for poor strangers and madmen, it later became a mental hospital and closed after about five hundred years of activity thanks to the Basaglia law of 1978. The Museum was born from the collaboration with Studio Azzurro and aims to document the history of the asylum and start a reflection on the theme of diversity and social exclusion. The visit is divided into 7 areas, dedicated to the perception of mental illness, the internal life of hospitals, clinical methods and the figure of Franco Basaglia. These thematic islands are developed both inside and outside and, in addition to the works of Studio Azzurro, the museum collects the scientific collections and historical artifacts belonging to the former asylum, from pharmacy equipment to medical, health and scientific research equipment. You come out destroyed but more aware and empathetic towards the conditions of suffering (which is no small feat .. especially in this historical moment).


Museum of the Mind 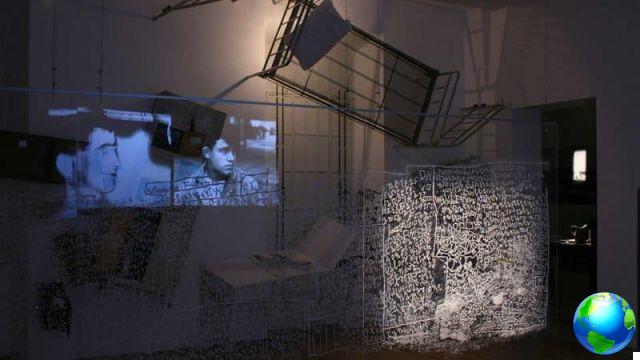 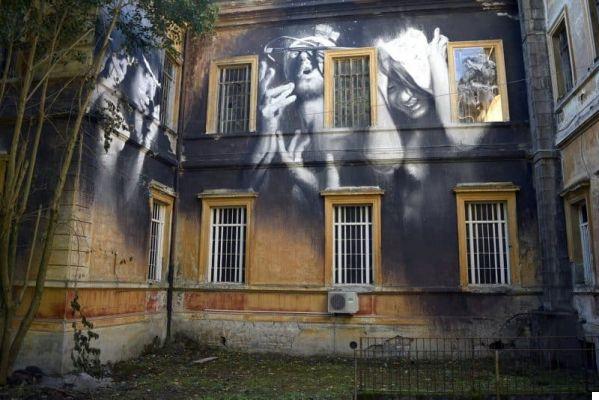 Among the places of unusual Rome, she could not miss! There Centrale Montemartini was the first public electricity production plant in Rome at the beginning of the 900th century and, after the restructuring that took place in 1997, it has become an extraordinary example of industrial archeology converted into a museum. In one part of the rooms, in a suggestive juxtaposition between cast iron machinery and terracotta, bronze and mosaic finds, are exhibited many masterpieces that were part of the Capitoline Museums and of the former municipal Antiquarium remained closed for decades in the warehouses due to lack of space. This museum is awkwardly beautiful, it's one of my absolute favorites, and I still don't know why it's a very little visited museum (although seeing it practically for yourself is priceless!). 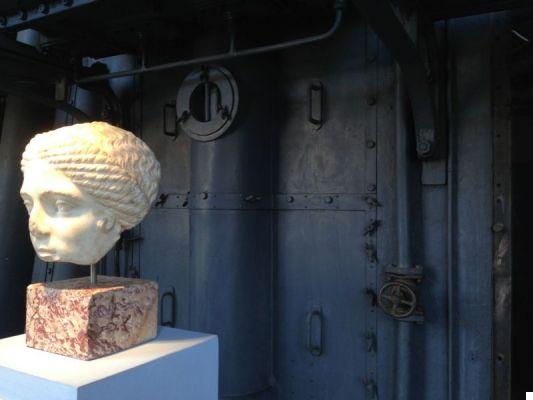 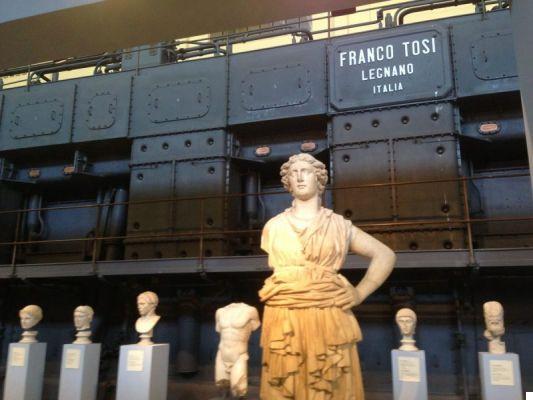 7 - The EUR and the Fuksas Cloud

The EUR district (Universal Exposition of Rome) was born as a satellite city wanted by Mussolini on the occasion of the Universal Exposition of Rome which should have taken place in 1941-42, whose works, however, were suspended due to the outbreak of the war. In fact, the exhibition never took place. However, most of the gigantic fascist-style buildings were completed in the 50s and the district now houses some very interesting buildings, mainly housing museums, banks and ministries. Among the most beautiful buildings there is certainly the Palace of the Civilization of Labor also called 'square colosseum ', purchased from Fendi a few years ago it became its headquarters; every now and then we organize exhibitions and it is possible to visit it. Not far from there there is then the famous Nuvola, or the Rome Convention Center, a futuristic (by now not too much) international congress facility designed by Massimiliano and Doriana Fuksas, finally completed after years of controversy.

Open only during extraordinary openings, events or fairs 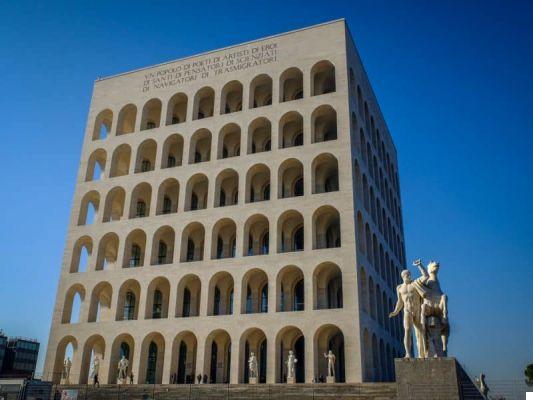 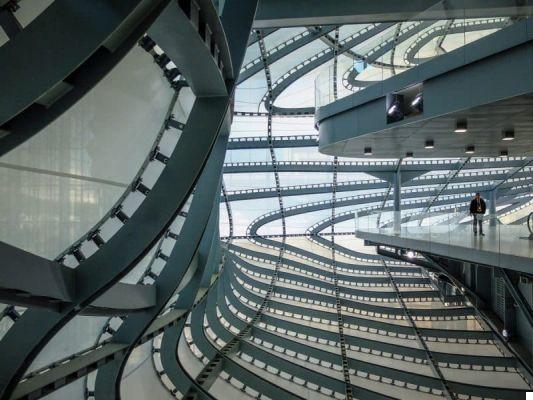 The Romans often call it the English cemetery because mostly Protestants are buried there, but in reality it is a non-Catholic cemetery and also houses the graves of illustrious atheists or Greek Orthodox people. It is a kind of secret garden just behind the Cestia pyramid, where the Testaccio district begins. Here Gadda, Goethe, Gramsci, Miriam Mafai, Keats, and many other poets, writers and famous people. Some tombs are truly spectacular and walking under these huge maritime pines in the company of cats, you can breathe an incredible air of peace. Also various members of the Bulgari family (of Greek Orthodox religion) are buried here and a subscription was launched by Bulgari to restore the cemetery. 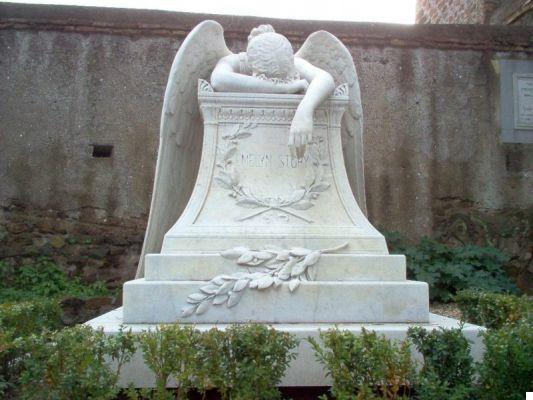 - the church of Santo Stefano Rotondo It is in the Celio district, where in imperial times (but also today) many wealthy citizens resided. It is a small XNUMXth century church that is truly unique because, together with the Mausoleum of Santa Costanza, it is the only round-plan church in Rome. Internally it has two rings of ancient granite and marble columns with beautiful decorations that illustrate the various types of martyrdom suffered by the saints. Another place of unusual Rome that you cannot miss! 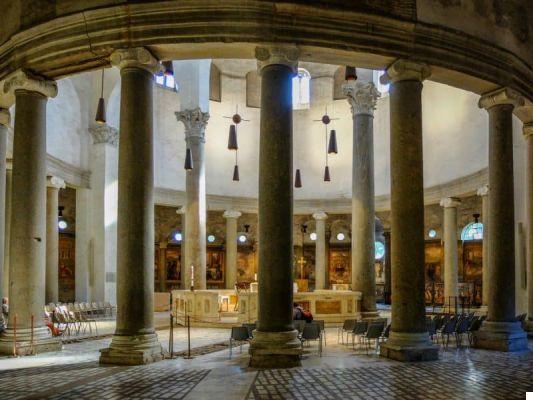 10 - The ghetto and the synagogue

The presence of Jews in Rome dates back to a wave of immigration in the XNUMXnd century BC, this is the oldest European Jewish community still existing. There was a time when there were 13 synagogues throughout Rome, but over the centuries, depending on who was in power, Jews were often victims of persecution. The situation took a turn for the worse in 1555 when Paul IV forced the Jews to live confined to the Ghetto; the latter was then dismantled in 1888 but the religious and cultural identity of the Roman Jews has survived intact to this day. Today the Ghetto is one of the most characteristic areas in the center of Rome, with the houses that have incorporated the remains of Roman and medieval residences and one multitude of trattorias where you can eat the real Roman cuisine (like the famous artichokes alla giudia .. which are called that not by chance). The hub of the Ghetto is the Portico d'Ottavia, built by Augustus, who hosted the fish market in Rome from the Middle Ages to the end of the 800th century. Not far away there is then the Tempio Maggiore, the first monumental synagogue in Rome (1904), with the Museum of Jewish Art inside. A curiosity, many scenes of the film "The front window" by F. Ozpetek were shot here. If you want to learn more about the history of this neighborhood I recommend this tour of the Jewish Ghetto and Trastevere; it starts from Piazza Trilussa in Trastevere then goes to the Tiber island until you enter the ghetto. It lasts 3h and is really well done.

Synagogue and Museum of Jewish Art

Closed on Saturdays and Jewish holidays 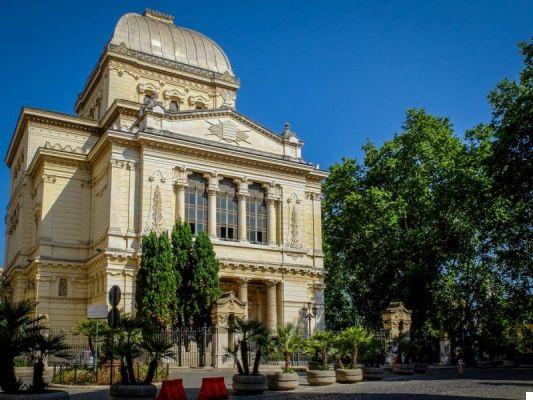 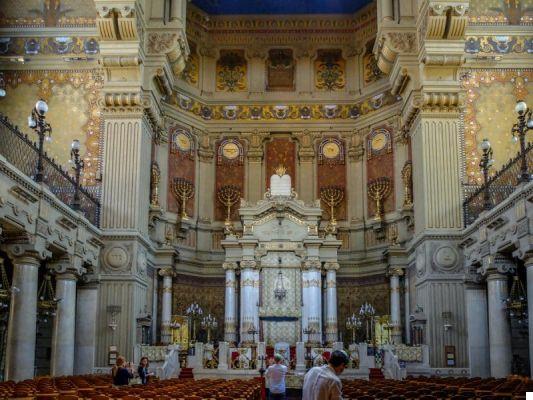 If you liked this article, you might also be interested in these other articles I wrote about Rome:

San Fruttuoso di Camogli: the paths, the abbey and the beach ❯