The Venice Carnival 2020: all the events not to be missed

Venice is Venice, no one is like her; a unique city in the world, a magical and mysterious place that fascinates every visitor. In Venice you have the feeling of living in an 700th century fairy tale, your gaze is lost in the alleys and canals and you cannot help but be entranced by the incredible beauties that this city is able to offer. The Serenissima - as it was called in ancient times - is able to transmit great emotions at any time of the year, but there is no doubt that Carnival represents the very essence of the city. The Venice Carnival it is the largest masquerade party in the world and it is an event that everyone should attend at least once in their lifetime.

The history of the Carnival

Venetians have been celebrating the arrival of Spring with Carnival since the 2th century. Originally it was celebrated with masked balls and bloody street games, such as bull fights or shooting live dogs with cannons. The institution of the Carnival by the Venetian oligarchies is generally attributed to the need of the Serenissima, like what was already happening in ancient Rome, to grant the population, and especially the humblest social classes, a period entirely dedicated to entertainment and festivities, during which Venetians and foreigners flocked throughout the city to celebrate with wild music and dancing. Through the anonymity that masks and costumes guaranteed, a sort of leveling of all social divisions was achieved and even the public derision of the authorities and the aristocracy was authorized. The climax was reached in the eighteenth century when the licentious Carnival parties lasted for 1797 months. The joyful and incognito participation in this collective disguise rite was, and still is, the very essence of Carnival. After Napoleon's conquest in 1979, the event was downsized until it was completely abolished in the Fascist period. Revived in 15, Carnival again became the great costume party we all know today. The celebrations are spread over a period of 2018 days: in 27 they will begin on Saturday 13 January and end on Tuesday XNUMX February with the traditional Svolo del Leon. 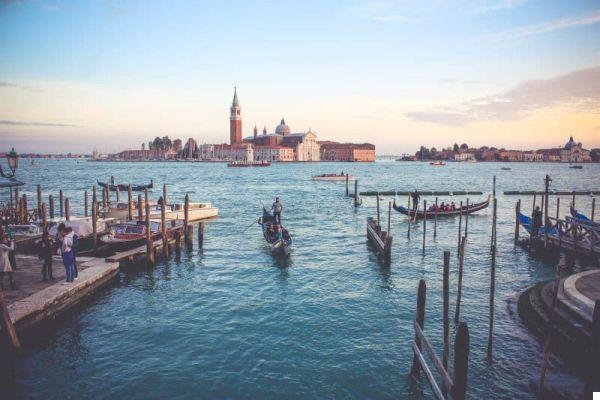 Venice Carnival 2020: all the events not to be missed day by day

This show of aquatic images and music will officially open the Venice Carnival 2020 celebrating The Game, Love and Madness with an original staging on the Rio di Cannaregio in the sestriere of the same name. The Rio will be transformed for the occasion into a real water stage with a show that enchants thousands of spectators every year, with many floating structures that interpret the theme of the Carnival on the water. You just have to go to the Fondamenta Cannaregio or the Fondamenta Savorgnan and enjoy the show! The show has two reruns, at 19:00 and 21:00 and is free.

After the inauguration show on Saturday, Sunday 8 February continues the official opening of the Carnival on the water with the water procession of the Coordination of the Rowing Associations Voga alla Veneta. The boats will depart from Punta della Dogana and will travel the entire Grand Canal until they reach Cannaregio again where, waiting for them, there will be the food and wine stands that will offer cicheti, Venetian specialties and traditional Carnival sweets par excellence: fritole and galani. . The start is scheduled at 11:00. 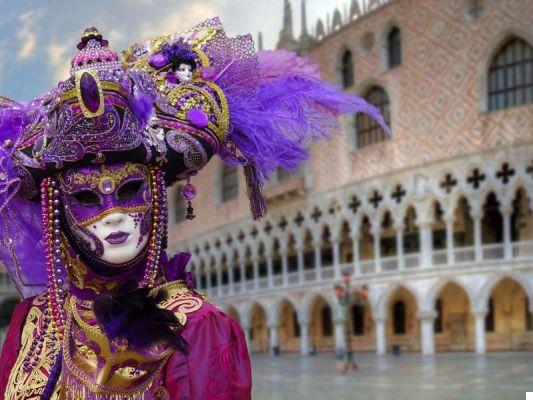 Competition for the most beautiful mask

Venetians are very attached to the Carnival tradition and work hard, as well as tourists, to have an increasingly beautiful mask every year. The winner is the public through a direct elimination voting mechanism. The masks parade every day at 12:30 and at 14:30 (on Saturdays only at 12 and on Sundays only at 15) on the stage in Piazza San Marco and, for the winners of the parades scheduled between Thursday and Fat Saturday (8-10 February), the final on Sunday 23 February is guaranteed!


Feast of the Marys

La Feast of the Marys it is a traditional festival of very ancient origins (dating back to 1039) which recalls, in a modern key, the kidnapping and release of twelve betrothed at the time of Doge Pietro Candiano III. At the beginning of the 2th century, on February 12 of each year, the day of Mary's purification, the twelve most beautiful girls of the people, chosen to represent the city, gathered together with their betrothed in the church of San Pietro di Castello, to receive the nuptial blessing. In the modern revival, 18 girls aged 28 to 80 are chosen by a jury from a shortlist of 90-300 girls a week before the start of the carnival and then parade on sedan chairs from San Pietro di Castello to Piazza San Marco, accompanied more than 14 people in traditional dress. The parade starts around 30 pm and arrives in Piazza San Marco around 16 pm.

The flight of the angel"

In an edition of the Carnival towards the middle of the 500th century, among the various events and shows organized in the city, an extraordinary event was realized that caused a sensation: a young Turkish acrobat managed, with the only help of a barbell, to reach the bell cell of the bell tower of San Marco walking on a very long rope that started from a boat anchored on the pier of the Piazzetta. On the way down, however, he reached the balcony of the Doge's Palace, paying homage to the Doge. The crowd below was delirious. From this episode the famous Flight of the Angel was born, which takes place every year in St. Mark's Square and officially opens the Carnival celebrations. As tradition dictates, it is the winner Mary of the Carnival in 2019 who plays the role of the new Angel of the 2020 edition. Waiting for the Carnival Angel to descend from the bell tower (at 12:00), the stage in Piazza San Marco it is filled with "tradition" and colors with the groups of historical re-enactments parading in their traditional costumes.

The Fat Thursday Festival and the Cutting of the Bull's Head

This festival in its 6th edition takes up and reinterprets the ancient anecdote on the day of Fat Thursday of the year 1162 in which the victory of Doge Vitale Michiel II over the Patriarch Ulrico of Aquileia with the 12 rebel Feudal lords was celebrated. In memory of the attempted insurrection suffocated in blood, every year the successors of the Patriarch had to send a bull 12 loaves and 12 well-fed pigs as a gift and compensation to the Doge in charge. The bull-patriarch with the 12 pigs-feudal lords were ridiculed in the public square with a ritual that included the spectacular cutting of the bull's head at its peak, hence the all-Venetian saying "Tagiar la testa al toro" which means closing the affair definitively, also synonymous with quick solution, dry even if painful. The animals were subsequently slaughtered and cooked and their meat distributed during banquets among the nobles, the clergy, the people and the prisoners. The festival takes place in Piazza San Marco at 14:00. 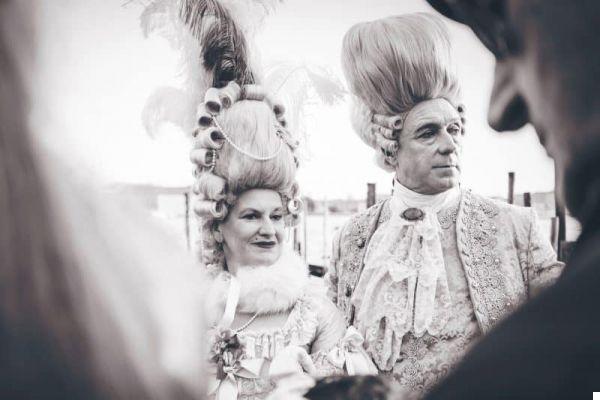 The "Flight of the Eagle"

Given the success of the Flight of the Angel, from the 2012 Carnival edition a new event was introduced, the Flight of the Eagle, which follows its modalities and which takes place the following week, again at 12:00. This time it is a testimonial who changes from year to year; in past editions there have been Melissa Satta, Francesca Piccinini, Carolina Kostner, Giusy Versace and Saturino Celani.

From 15:00, always in Piazza San Marco, the proclamation of the most beautiful mask of the Carnival takes place.

Coronation of the "Mary"

The award ceremony with the coronation of the winning “Maria” arrives in Piazza San Marco at the end of the water procession departing from San Giacomo dell'Orio and at 16.30 pm the Doge crowns the sweetest and most graceful damsel. The winning Maria will then have the honor of making the "Flight of the Angel" as a protagonist in the edition of the Carnival of 2021 as tradition dictates.

The "Flight of the Leon"

The Venice Carnival of 2020 closes with the famous Volo del Leon or Svolo del Leon in Piazza San Marco at 17:00. The winged lion of San Marco - symbol of the city - will climb the bell tower painted on a large scenic cloth to fly over the public in the square. All 12 finalist Marys will welcome him on stage.

These are the official events of the 2020 Carnival, which are joined each year by dozens of events and private parties organized in the beautiful Venetian palaces and theaters. Some parties are super-exclusive, others are accessible to everyone by paying an entrance ticket. 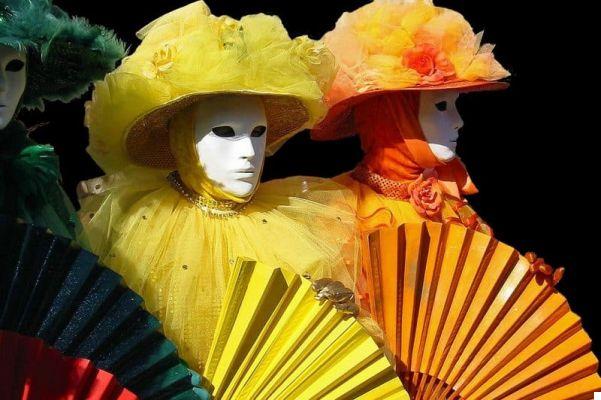 Where to rent Carnival masks and costumes in Venice 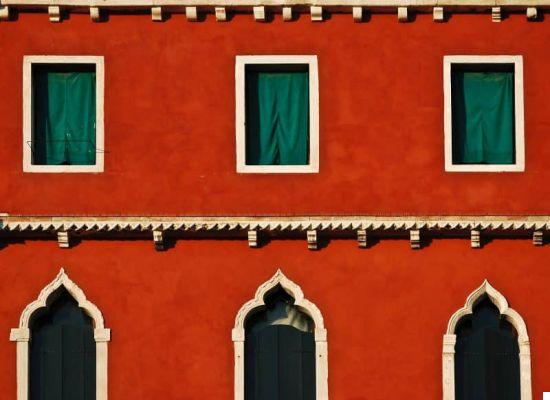 Where to sleep in Venice

Venice is divided into 6 sestrieri (districts) which are: Cannaregio, Castello, San Marco, Dorsoduro, San Polo and Santa Croce. If you are good walkers, whichever neighborhood you choose is good for exploring Venice on foot, otherwise you should choose San Marco or San Polo. If you want to experience the city at 360 °, my advice is to book an apartment; in this way you can experience Venice as a true insider. Personally, I love sleeping in Cannaregio (in the area of ​​the ancient ghetto) or in Castello, but each neighborhood has its own charm.

There are many apartments for rent and, among other things, they are often cheaper than hotels. From this site you can choose and book more than 350 apartments in just a few clicks, in all areas, of all sizes and all prices.

Where to eat in Venice

Find all the info on where to eat in Venice in the article A weekend in Venice: where time has stopped.

This article was written in collaboration with Dolce Vita Apartments Srl.

The Zak Castle: a secret museum on the outskirts of Milan ❯

add a comment from The Venice Carnival 2020: all the events not to be missed