Tenerife: the 15 most beautiful beaches

Tenerife it is undoubtedly one of the most popular Canary Islands for travelers looking for sea, beaches and sun (especially in winter, but not only). Those looking for this alone would actually do better to orient themselves on Fuerteventura o Lanzarote in my opinion, but Tenerife has the great advantage of being really varied and, in addition to the beaches, it really offers so much more. But which are the most beautiful beaches in Tenerife? After spending 2 months on the island, I must admit that I have seen so many and in this article I have selected my favorites for you.

South Tenerife: the most beautiful beaches

I could not start this article on the most beautiful beaches in Tenerife if not from her my favorite beach "near home", that is El Camison Beach in Las Amèricas. This white sand beach is very beautiful and well-kept and is the most sheltered in the area, thanks to the breakwaters that have been positioned in a semicircle. It is a beach equipped with umbrellas, sunbeds, toilets and showers and, right on the sand, there is a nice chiringuito where you can drink / eat something. Even when the calm wind blows, it is certainly better here than elsewhere.

My second favorite beach in Playa de Las Américas is Las Vistas Beach, which is located next to Playa El Camison, going towards Los Cristianos. This beach is very large and is also quite sheltered from the wind. It is a very popular beach for sportsmen who come here to play beach volleyball, or to train. The beach is large and equipped and, immediately behind it, there are dozens of bars and restaurants. 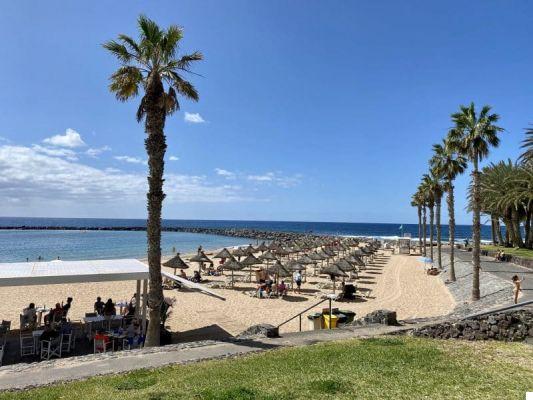 Costa Adeje is the most luxurious area in the south of Tenerife and its beaches could not be outdone. Playa del Duque it is certainly the most beautiful and scenic in the area, a beautiful white sand beach, equipped and surrounded by luxury hotels and shops. It is quite sheltered but when there is rough sea it is impossible to swim here because it becomes dangerous (always pay attention to the color of the flag you see on the beach!).

From the equipped beaches, we now move on to a much wilder beach in Tenerife, which can only be reached on foot or by boat. There Diego Hernandez beach it is also called Caleta de los Hippies and is a predominantly nudist beach. It is a beautiful white sand beach located near La Caleta, in Costa Adeje. This beach can only be visited when the tide is low; at high tide the water reaches the stone area and “clears” the sand. The path to reach it starts from here; bring water and food because you will not find anything there (and this is its beauty!). 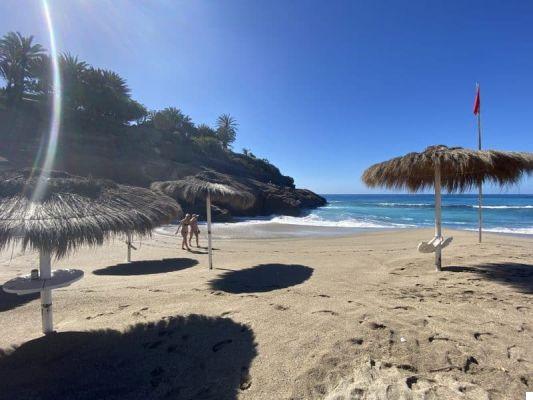 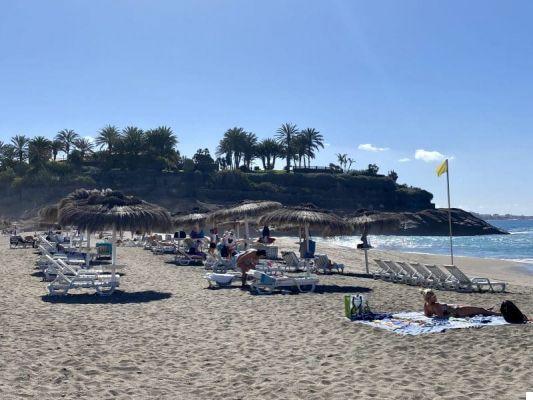 Going further, before reaching Los Gigantes, a stage in Playa Abama it is a must! To reach it you will have to park your car here and walk down (it's about 800 meters downhill). You will skirt theHotel Ritz-Carlton until you get to the El Mirador bar-restaurant, from there you can then take the stairs or continue along the road. The beach is sheltered and protected thanks to the breakwaters and has white sand. It is very well maintained because, in fact, it is the hotel beach. There are showers, toilets and a bar (where you are plucked though, so I recommend that you bring water and food). To the left of the beach there are also some beautiful ones natural pools. If you want to see other beautiful ones, I recommend those of Alcala , which are located a few kilometers away. 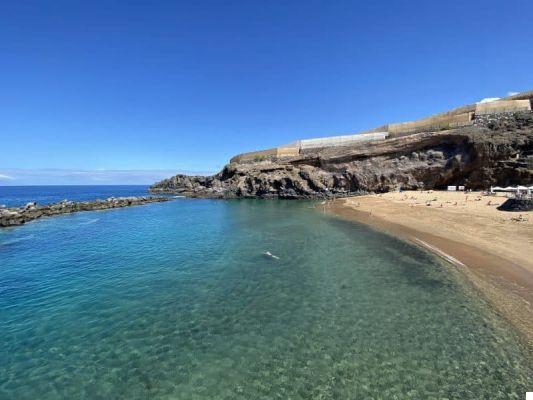 Proceeding towards Punta Teno, the last beach reachable by car before the cliffs of Los Gigantes is Guios Beach. This small beach is located behind the small port of Acantilados de los Gigantes and is a real gem. It is a very sheltered black sand beach with one of the best views on the island. In fact, from here the great cliffs of Los Gigantes begin and swimming in front of them is priceless! The beach is not equipped but there are many bars and restaurants in the immediate vicinity. 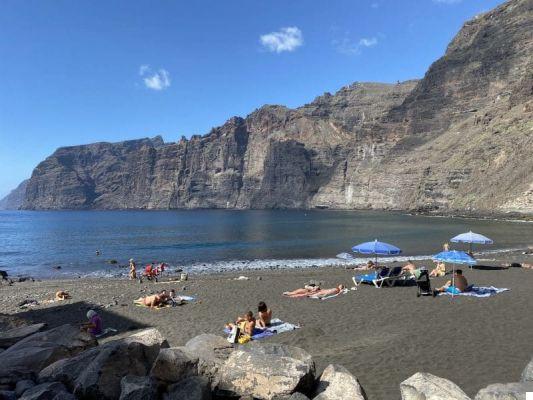 Among the most beautiful beaches in Tenerife I absolutely also include Punta de Teno Beach, on the northwestern tip of the island. The corner from Los Gigantes to the Punta de Teno lighthouse is characterized by unspoiled landscapes of rare beauty and this beach is no exception. The road to get there is closed on weekends and public holidays, but you can get there by bus from Buenavista del Norte or on foot (7 km). Here you will find the bus timetables. In addition to this beach, through the wooden walkways you can also reach the rocks from which you can jump and then go up again with the ladders. This is one of the most charming areas of Tenerife for me. 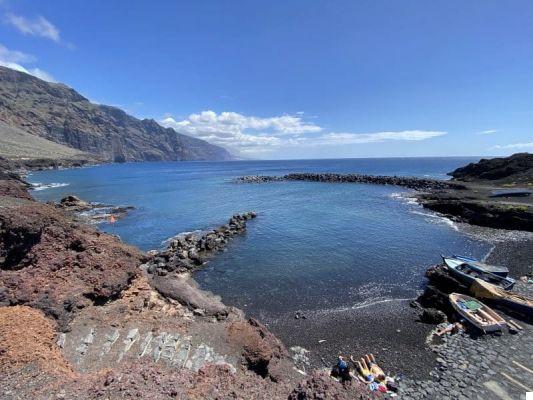 We now move to the opposite side of the coast, the one that climbs from Los Cristianos towards Candelaria, and one of the first beaches worthy of note is Yellow Beach, near Costa del Silencio. This small pebble beach takes its name from Montana Amarilla, a very suggestive yellow rock mound that protects it. Entering the water is not easy here, but you can dive and then go up again with the ladders. The glance on the other hand is very nice, especially in the afternoon, when the color of the rock becomes more intense. You can also climb the mound (it takes 10-15 'maximum) and then refresh yourself with a nice ice cold beer in the kiosk located at the corner of the beach. 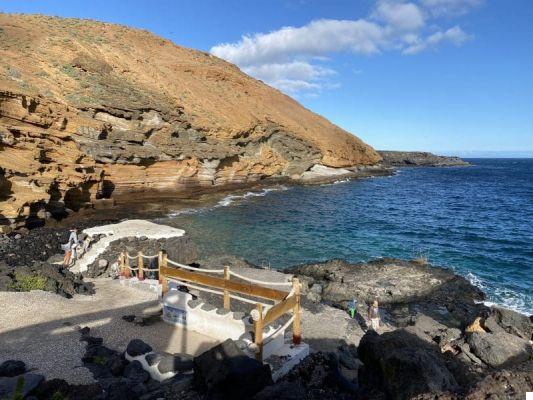 From a yellow mountain you pass to a red mountain (Montana Roja), the one that protects La Tejita Beach in El Médano. This white sand beach stretches for about 1 km south of El Médano and, unlike the city beach, it is a much more protected beach from the wind (which always blows strongly in this area). Playa de La Tejita is a wild beach, there are no buildings nearby, except a small kiosk where you can get something to drink or eat. The first part of the beach, the one under the Montana Roja, is dedicated to those who practice nudism. 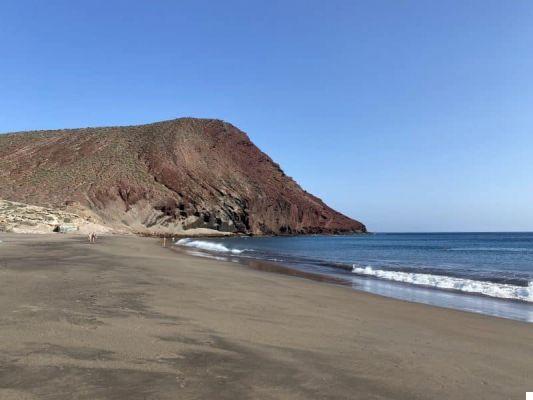 I close the part dedicated to the most beautiful beaches of South Tenerife with a little gem, the Roques de Fasnia beach. This beach is really tiny, but I decided to put it in for context. It is in fact in front of a micro fishing village that has a handful of houses almost clinging to a large rock (Los Roques in fact). It is a decidedly timeless place, for those who want to take a bath away from everyone and everything. 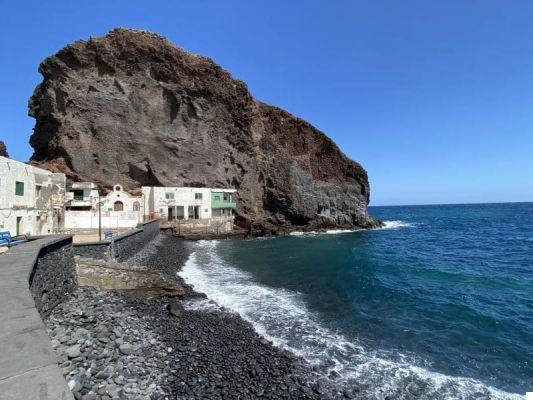 The most beautiful beaches in north Tenerife

The north of Tenerife is much greener than the south, it is wild and mountainous, and offers breathtaking views that even recall Hawaii !! The weather is less favorable than in the south (because the wind usually comes from the north), it rains more and it's colder, but the beaches in this area are really beautiful and super scenic.

Las Teresitas Beach it is located just north of Santa Cruz and is considered by many to be the most beautiful beach in Tenerife. It is certainly one of the most comfortable for everyone (including children) and offers a nice glance, especially when viewed from above. This long equipped beach has a calm sea thanks to the breakwaters and a beautiful white sand imported directly from the Sahara (as happens for many other beaches in the Canaries). It is the most loved beach in Tenerife by chicharreros (as the inhabitants of the island are called), but it is really big and wide and everyone can comfortably find their own space of peace. If you have a car, also go and see it from above, from the mirador located along the road to Las Gaviotas. 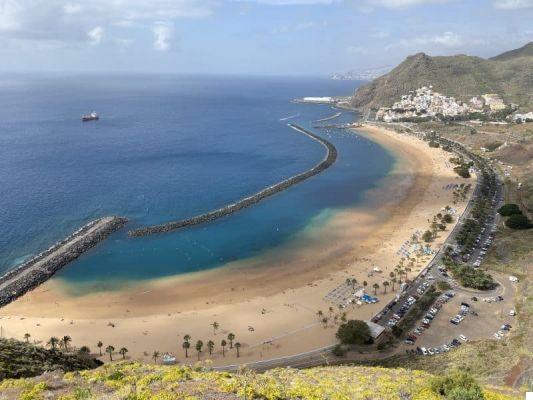 Continuing from Las Teresitas towards the northeastern tip of Tenerife, after a few kilometers you will find the crossroads to reach Las Gaviotas beach, a much wilder beach than the first and with black sand. Playa de las Gaviotas is not equipped but it is very beautiful; a part of the beach is dedicated to those who practice nudism. 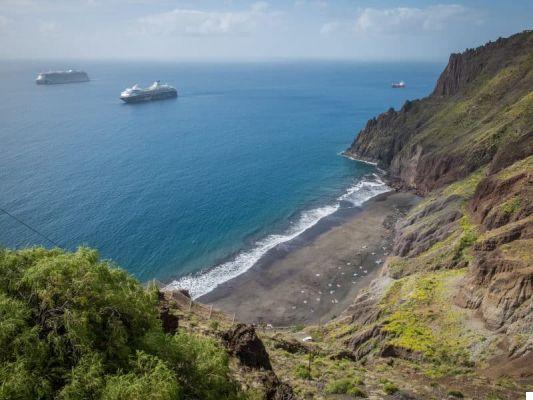 To my personal taste, the Benijo Beach it is perhaps the most beautiful of all the beaches in Tenerife, certainly the most fascinating. To reach it you will have to travel several kilometers of curves, those that rise and then descend from monti Anaga towards the sea, but you will be amply repaid! It may be difficult to bathe here because the sea can be really violent, but if you are lucky, it could give you a bath with the most beautiful view of the island. Playa de Benijo is also very popular with surfers (the good ones) and there are several good restaurants to eat fish. 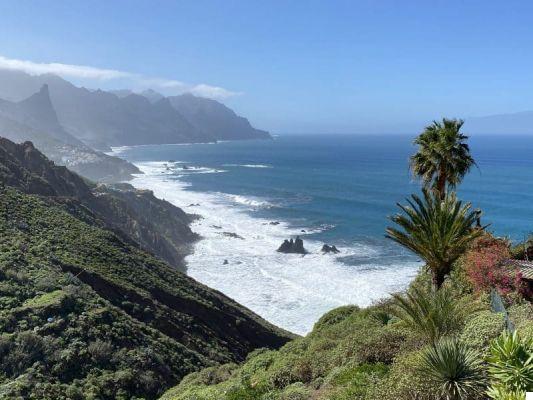 The last 3 beaches in Tenerife that I have decided to include in this article are all located near Puerto de la Cruz, perhaps the most beautiful (certainly the most liveable) city of Tenerife. Let's start with Los Roques beach, so named for the two large rocks in front of it. This beach is located south of Puerto de la Cruz and can also be reached on foot from the city center with a nice walk along the coast. When I was there, the path to reach it was technically closed, but in fact we passed. The beach is very beautiful both from above and below and is a pebble beach, not equipped. 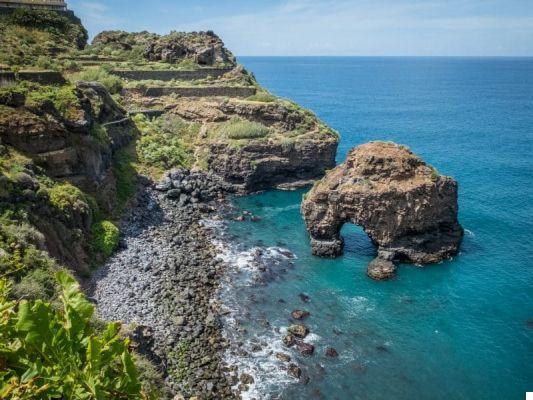 If you reach Playa de los Roques on foot, you will necessarily have to go through Jardin Beach, a beach conceived no less than by Cèsar Manrique (find more info in the article on Lanzarote). Playa Jardin is a black sand beach, sheltered and equipped. The name comes from the super-manicured gardens that frame it (in full Manrique style!). On one side of the beach there is the San Felipe Castle, an ancient watchtower. 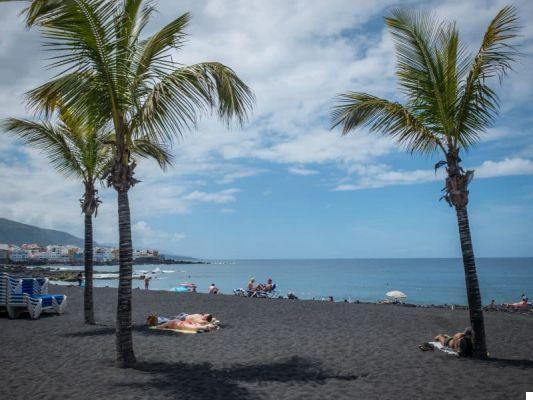 I close this article on the most beautiful beaches in Tenerife with Castro Beach, a beautiful beach that can be reached via a path (very nice too) that starts from Mirador de San Pedro or from the center of Puerto de la Cruz (the same you can do to reach Playa Jardin and Playa de los Roques) . It is a dark pebble beach surrounded by very lush vegetation. It is not equipped so remember to bring water and food. You can also see along the path to reach it l'Elevador de Aguas de Gordejuela, Also known as Hamilton House. This ruined industrial building was built in 1903 by the Hamilton company to pump water from the Gordejuela springs to the banana plantations in the Orotava Valley. 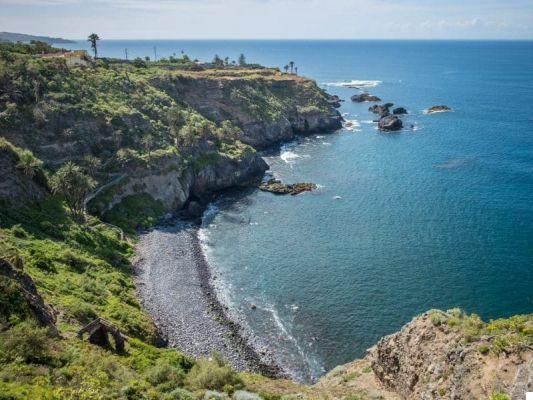 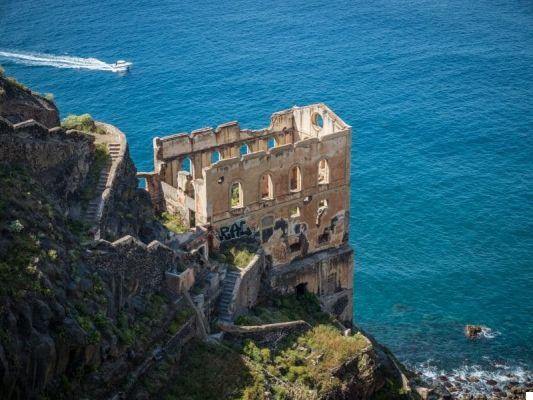 Thermal baths and SPA near Milan: 10 places not to be missed ❯

add a comment of Tenerife: the 15 most beautiful beaches