Fortunately, Berlin's main attraction is something that no longer exists: here's how to retrace the history of this beautiful city!

Berlin, is a city in rebirth, an open construction site. Berlin has been through a lot and now it is renewing itself with modern buildings and skyscrapers, without forgetting the history that after 30 years from the fall of the wall it is still lived and breathed. Let's go and discover together the corners of the history of this pulsating city. 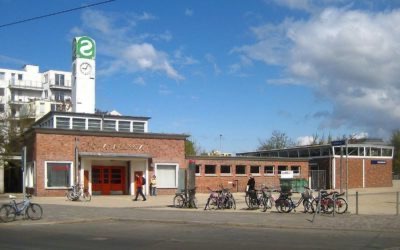 In Berlin the main attraction is something that fortunately no longer exists: the wall, which divided the city for 30 years. Now walking all over Berlin you will find commemorative plaques where the wall was so that you can understand how the division of the city was.

If you want to touch history, I recommend 4 places not to be missed.

The Wall divided not only the city of Berlin but also his own transport network. In fact, the vehicles had to pass from the eastern part and then return to the western part of the city.
One of these stations is the Nordbahnof. It's about a "ghost station". It is called this because the trains passed, slowed down, but did not stop. They were all patrolled by the military. In particular in this station there is one historical exhibition with photos concerning the period.

If you really want to know the history you can't miss this place. We are in Scheunenviertel district, in the north of Berlin. It is a memorial site where a section of the original wall can be found. In addition, the famous "death strip" was rebuilt, that is the part where the vehicles of the military who had the duty to shoot anyone who tried to cross the wall passed. At the center of this area is the "Window of Remembrance“, Or rather a wall covered with photographs of those who tried to climb over the wall and who unfortunately did not make it. In addition to the external area there is also an internal one that serves as a small museum, with photos that recall the period and a projection room where you can see the video that tells from the construction of the wall until its fall. 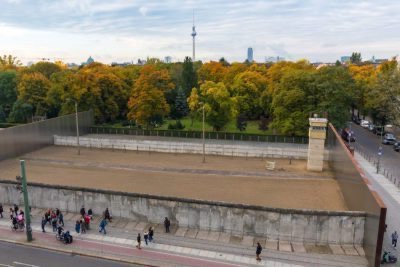 We are in the Friedrichshain district, where is the longest stretch of wall still standing. This part of the city can be reached easily by metro and the closest stop is Ostbahnof.
For about 1,3 KM the wall runs parallel to the Spree, the river of Berlin.
After his fall, more than 100 artists from all over the world came together and decided to paint real works of art directly on a piece of history. Among the most famous paintings we cannot fail to mention: the famous kiss on the mouth between political leaders Leonid Brezhnev and Erich Honecker and the Trabant blue, the machine of the German People's Republic, which breaks through the wall. 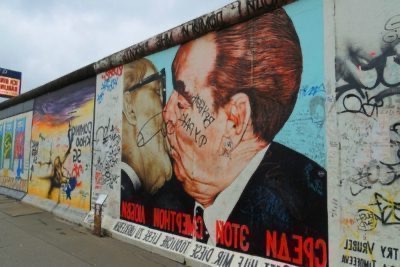 Located near Potsdamer Platz, this historical place represented the main crossing point for all diplomats and foreigners who were allowed to transit between East and West Berlin between the 1961 and the 1990.

Today there is very little left of this place, or rather, more than anything else it has become an attraction for tourists. Here pieces of the wall are sold as souvenirs and it is possible to be photographed with boys disguised as a soldier for a few euros.

Audio Video Berlin through the wall, itinerary
Copenhagen: what to see for free ❯

Getting around Berlin low cost: WelcomeCard

Tacheles, the squat in Berlin

Journey to Germany through the words of a Latin language

add a comment of Berlin through the wall, itinerary