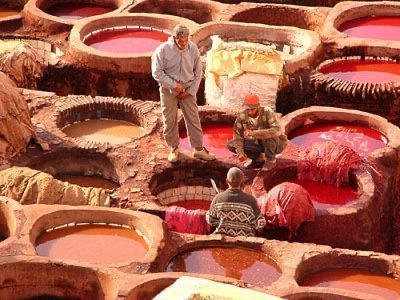 If I think of spring I think of Morocco, its pink oleanders, its luxuriant palms, the valleys of an almost dazzling green and the absolute contrast with the desert, red rocks and dust.

The natural landscapes of the Dades Valley and the Todra Gorges are breathtaking, but the peculiarity of this country is represented by the cities, confusing, overwhelming and pulsating with life.

Fes it contains all these characteristics, more authentic and less touristy than Marrakech, I would describe it as a chaotic labyrinth capable of involving all the senses. The first impression was that of feeling catapulted into another world, light years away from Italy .. when instead two hours of flight were enough!

Direct links Bergamo-Fes e Pisa-Fes with Ryanair in fact, they allow you to spend even just a pleasant and different weekend. As in many other places (but in Morocco even more!), There are many false guides who try to grab tourists in the most varied ways, so be careful not to give rope to those who stop you, rather listen to the advice of those who really know the place and its customs, such as the owners of Dar Mehdi.

The managers of this Moroccan house are very kind and available, who for a ridiculously low price will spoil you with regal breakfasts and Lucculian dinners, all in a typical atmosphere and absolute tranquility, although it is just a few steps from the door. Bab Jeloud. Excellent position to start the visit of the city and to get lost in its very narrow streets.

Audio Video A weekend in Fes, Morocco, tips for the visit
Tenuta Tannoja, eat in a Masseria in Puglia ❯

Marrakech in 3 days, what to see

The 6 variants to eat the Tajine

add a comment of A weekend in Fes, Morocco, tips for the visit