Where to eat absolutely in Barcelona: Casa Mar y Rufo 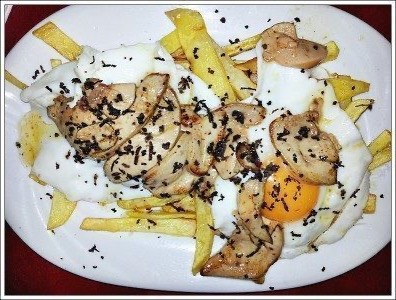 Ti sit down to drink a beer and a mini plate of patatas bravas and you end up with a 17.50 euro bill.
And apart from being open-mouthed for a bill that cannot be saltier, you have to practically beg the various waiters to get you paid by credit card, to be told instead that, no you can't, if you want to pay you have to. do it in cash and with everyone else sitting at your table (who weren't leaving anyway).

One of the worst customer services always (aside, I had to ask for two forks and the waiter almost electrocutes me).
So even if the terrace is nice and someone recommended it to you don't go to Les Cuines de Santa Caterina. But in the unfortunate event that you went there, do me a favor too, then, after having gone too far, do a good SINPA (sin pagar), if they deserve it.

Instead, turn the corner and immediately ask for a table at the "Mar y Rufo house". It's not stylish, on the contrary (but it's not cheap either: mussels + fried squid + 2 plates of hand-cut fried potatoes from Mari + a bottle of wine = 43 euros)
There are no waiters with colorful shirts and trendy haircuts. In reverse.
There are no "reductions to balsamic vinegar" or "scents of" or "touches of". There is fresh fish cooked properly (the mussel sauce was spectacular), a spartan and courteous service, that touch of Spain that sometimes seems to get lost in the sea of ​​cool and modern restaurants (only the pan con tomate was bad).

The best was when we sent Elena to ask for a table outside and Rufus said to her (free translation, I'm not giving you the whole sentence in Spanish): Bellina, there are no more tables outside, but you can go to the nearest table to the window and open it. Basically it's like being outside. " I loved it right away.

What: Casa Mar y Rufo
Where: c /. Freixures N ° 11
How to get there: Metro L3, Jaume I stop. It is on the other side of the Laietana from the Catedral.

add a comment of Where to eat absolutely in Barcelona: Casa Mar y Rufo