Four unusual places in London not to be missed, from the Greenwich pedestrian tunnel that passes under the Thames to the already well-known canals of Camden Town and Little Venice.

London it is a bit the hub of my world, the city that can do everything and that offers everything that can serve to give freedom and nourishment to my life, especially if it is new and unusual. 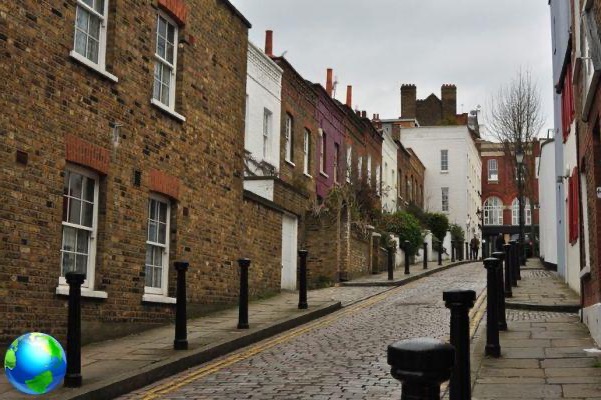 Places and people full of energy have made her feel mine since I met her, in the summer of many years ago, almost by chance. From then on, my existence became London-centric.
Returning over and over again to recharge the batteries and give my eyes a new glow, I discovered places light years away from the tourist routes: a calmer London to be discovered, hidden places, very noteworthy, and to be experienced at a slow pace. I offer them to you, travelers who love her, with a thread of jealousy that underlines the importance they have in my heart.

Il hilly neighborhood north of the center, right on the border between zone 2 and zone 3 (those shown on the maps of public transport to understand). It is located beyond Regents Park and Chalk Farm and even higher and can be reached by the Northern Line (in Milan we would call it “the black”) at the stop of the same name. It immediately seems to be in a suburb almost in the countryside. 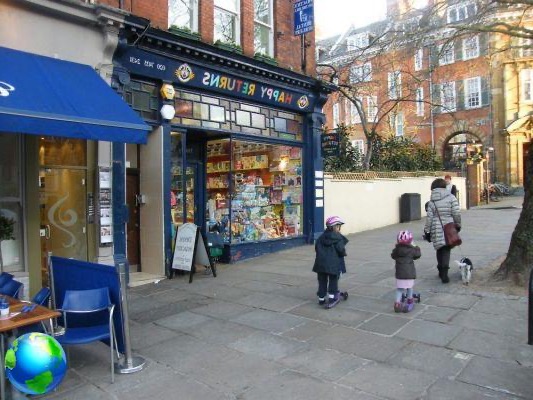 The streets are narrow because there is no need to manage large traffic here; the streets are lined with book-style pastry shops by Sophie Kinsella and the like (you know Appointment at the Cupcake Café. by Jenny Colgan? Well, identical); the pedestrian areas further slow down the pace of life and, here, pretty ethnic restaurants and a well-established and not at all noisy Italian community contribute to creating the particular setting. What not to lose in this corner whose space-time distance from the hectic City seems infinite? A walk in the park of Hampstead Heath and the view over the city from one of its most elegant hills. 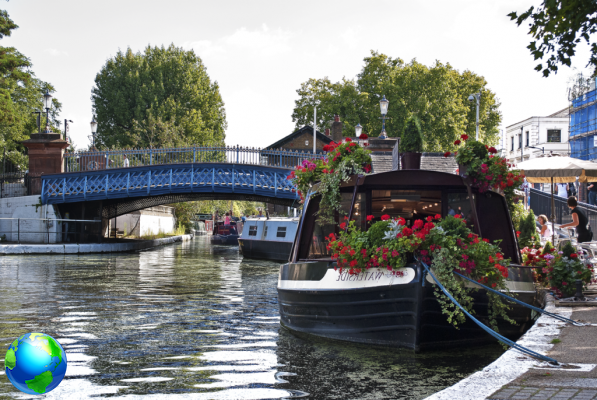 The canals of Camden Town and Little Venice

We start from one of the most touristic places in London: Camden Town, a destination for alternative and curious young people from all over the world, and a place where the most interconnected network of markets in London is established, among which the historic Camden Lock Market located inside a brick building from the seventies. To get there, you cross a bridge with an evident industrial mold, which allows you to cross the Regent's Canal. Looking out to the right you can see numerous small boats suitable for navigation on the canal, while on the left the double lock allows you to head towards Regent's Park and reach the scenic Little Venice. It is fascinating to think of the slow flow of the waters, the calm floating of the barges and the slowed path that can be done through the London canals towards the center and the Victorian houses in white stucco or, in the opposite direction, towards the verdant northern suburbs, that of the numerous lakes, golf courses, cycle paths immersed in the most luxuriant nature. 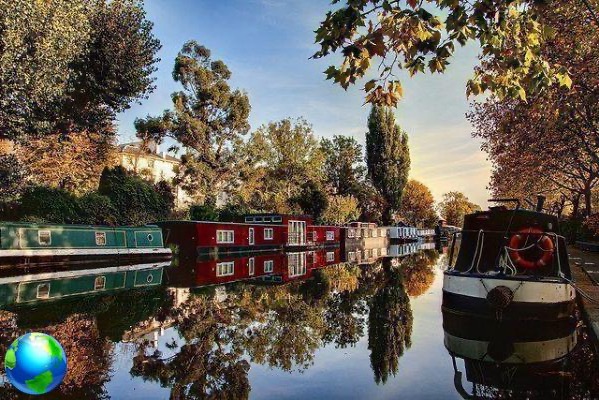 This path light years away from the accelerated vivacity of the metropolis, gives countryside postcard images and Scottish, Saxon, French and even Dutch mental connections. You will find Strasbourg in London here; as well as Hamburg, the Scotland of the ponds, Dutch and Burgundian navigation. A bucolic and pleasant summary of an infinity of places in Europe developed along the riverways, transposed to an unexpected and highly appreciable area of ​​London precisely because of its being unusual. I think back to the places and I can hear the rustle of the branches evoked by the fresh running waters.

Where to take the barge? One contact above all London Waterbus Company because before being a slow-paced attraction it was an internal communication and connection route to the city built in the nineteenth century by the British king of the time. 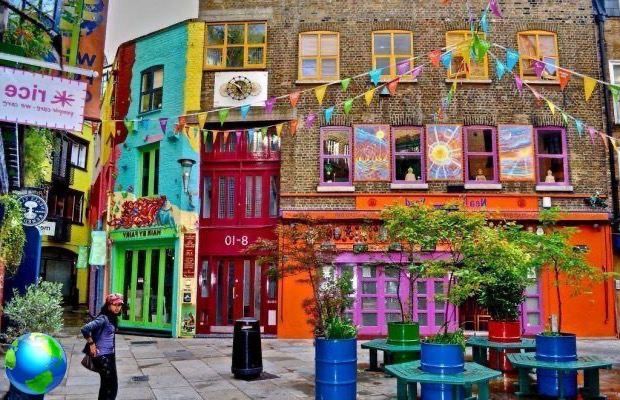 The colorful square of Neal's Yard

From the full liveliness of Covent Garden, the bustling neighborhood of West End originally an area destined to the largest market in the country and today a place of artists-stalls-restaurants-cafes, cross Long Acre and walk along Neil Street from which a small side street with a romantic name departs Shorts Gardens. It is from here that you take the very narrow pedestrian path that leads to the colorful square of Neil's Yard, hidden and wisely protected by the tall buildings completely used for the commercial offer with an organic, vegetarian, organic spirit, with attention to the green economy and the origin of the products sold here. 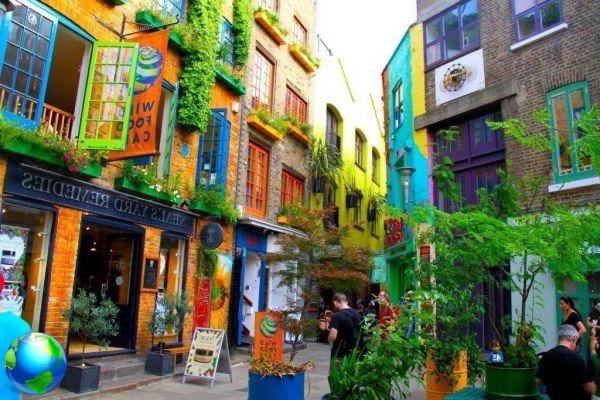 If color is what first enters your veins and suddenly invigorates you, it is the strength that comes from the harmony of this square that stays inside you, so much so that you want an equivalent in any city in the world. Neal's Yard it is collected and energetically balanced: the old oil cans recycled and happily painted find a new identity as pots for garden trees around which wooden benches are placed on which to spend a relaxing moment of pause; vases of flowers and luxuriant plants are displayed at every window overlooking the square and the street; ivy climbs on the facades of buildings partially hiding the exposed bricks; the colored fixtures ventilate the premises in every season; vertical gardens end richly on elegant attics; the multi-colored signs, often chosen as opposed to those used for the walls, announce the presence of hairdressers, beauty centers, mini markets, restaurants, salad bars that use exclusively organic and biological products. 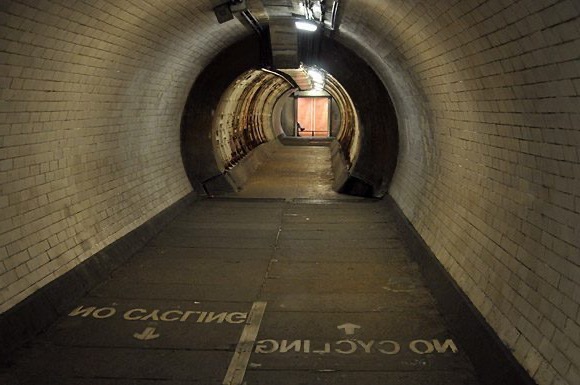 Raise your hand if you already know him and who has at least heard of him. I'm sure you are few. The Greenwich Foot Tunnel it's an old link that passes under the Thames and allows the pedestrian connection between the district of Greenwich (DLR Cutty Sark) and the southern area of ​​the Isle of Dogs. We are definitely east of London, a newly developed area that culminates in the new glass skyscrapers of Canary Wharf. I suggest you walk from south to north, then from the gardens of Greenwich, to the Thames, enjoy a beautiful panoramic view of the City and take the tunnel - located near the Naval Museum - inside which the temperature becomes very low and humidity is a thousand, walking in the presence of dim light and old pipes takes you back to the early twentieth century and certainly arouses curiosity and historical imaginations. It re-emerges in a park ofIsle of Dogs and from there the walk can continue pleasantly towards Canary Wharf, admire the new urban structures, reach the new DLR stations where design is king and, if you have time, go see the locks of the Thames in London that further east can not be done.

add a comment of Slow London, 4 places to see