Where to eat a giant Schnitzel in Berlin 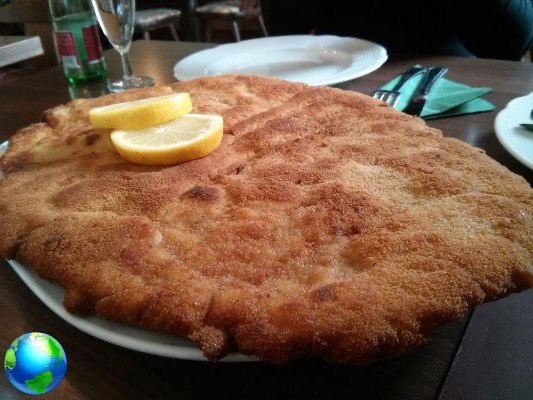 Of good and new things to try around the world, there are undoubtedly many, but you can't go to Berlin without tasting the Schnitzel, to understand each other, a sort of Milanese cutlet, and if you can eat it in a giant format, why not?
The friend I went to visit in Berlin knows some nice places, but by Luis you really have to jump in, especially if you have a good mouth.

This restaurant is located south of Berlin, in Richardplatz, easily reachable thanks to the U-Bahn (Berlin underground), just get off at the Karl Marx Straβe stop, follow it in the direction of Karl Mark Platz and, once here, turn left into the street of the same name, continue a bit straight and your super Schnitzel is just a few minutes' walk away.
The place is not very big, and of few pretensions, you recognize it because of the green writing on the window that makes the corner "Probably the largest Schnitzel in the capital".

I have been there for lunch, but in the evening I know that it is usually difficult to find a seat. A middle-aged gentleman, the classic German with a mustache and a belly, welcomed us. We don't even have a menu brought to us because we only came here for one thing: the giant Schnitzel. My friend, who juggles well with German, makes the order: two natural waters and a super cutlet. On the wooden table there are no placemats, just a towel holder, you eat like this, without covered with only the plates and cutlery.
As soon as I saw it I said to myself “Luckily we ordered one in two”, even if in the tables next to it there were those who were about to undertake the arduous task of a solo undertaking.

He told me it was big, but I didn't think it was so big! Within a maximum of fifteen minutes, our waiter brings us a dish hidden by a really huge schnitzel! The Schnitzel went over the edge of the plate, and there was a surprise: fried potatoes! They were all cut into rounds and placed on the bottom of the plate, obviously covered by the surface of almost 40 centimeters of the Schnitzel.

La breading was golden but not greasy - which I deeply appreciated - with two round slices of lemon on top. Boiling hot, do not immediately jump with a fork and knife that you risk a burn! Eating it all was a grind, a sort of Man Vs Food, but the women definitely won and it was a great satisfaction!


We left the club literally rolling towards the U-bahn stop but extremely pleased with our work. Don't expect frills or cuteness, the place is as simple as the service, but it's clean and fast.
Haven't I banished you yet Maybe first I have to reveal the price, 2 natural waters and a super Schniztel: 19.90 €.

Eating low cost - and in abundant quantities - in Berlin you can, as in any self-respecting city, you just need to know where to go, don't you think?

Audio Video Where to eat a giant Schnitzel in Berlin
The treasures of the Capodimonte museum, in Naples ❯