What to see in Bremen in 48 hours

What to see in Bremen, the city of musicians and a thousand surprises. Located in the far north of Germany Bremen is famous for Beck's but not only, come read and plan your visit to the German city.

I fell in love with the city of Brema looking at a photo found by chance on the web. It portrayed the facade of the Town Hall, in German Town hall, which, when artfully lit, gave off a charm and elegance that made me rush to look for information on flights, hotels, etc. 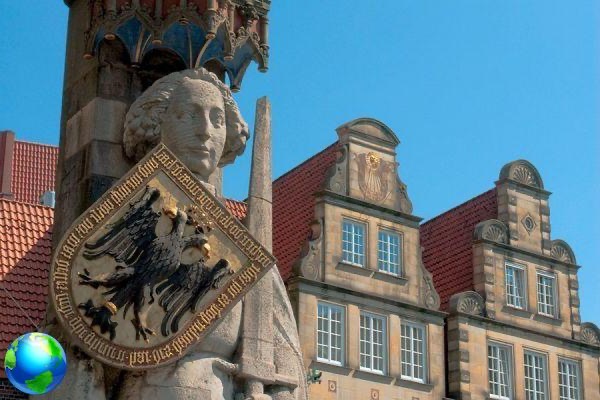 From there to click BookNow it was a short step. Then months later, when I saw it live, the expectations were not only exceeded, more! My trip to this elegant Hanseatic city in Northern Germany gave me surprises after surprises: every corner, every glimpse was a succession of wonder for the eyes. Here's what to see in Bremen in 48 hours. 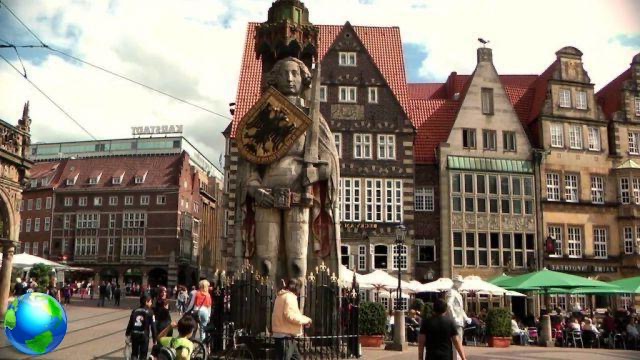 This square is incredibly elegant, beautiful with its architecture that can be defined as a mixture of Flemish, Baroque and Renaissance. The eye is lost between the building of the municipality with the statue of Roland, the superb façade of the Chamber of Commerce, the typical houses that house bistros with pretty outdoor areas and the cathedral. The square is very lively: not only tourists but also ordinary citizens who actively participate in demonstrations and events.
I was lucky enough to come across a festival of street artists who enlivened afternoons and evenings in several places in the square and in the city.
The interior of the Town Hall is can be visited by appointment, I recommend seeing it because if this ancient building is beautiful from the outside, the inside is enchanting. The furnishings, the wooden sculptures, the model ships hanging from the ceiling, the reception rooms and the frescoes are something absolutely unmissable. Also in the square, be sure to take a souvenir photo together with the sculpture of the famous Bremen Town Musicians, the protagonists of the fable of Grimm brothers. 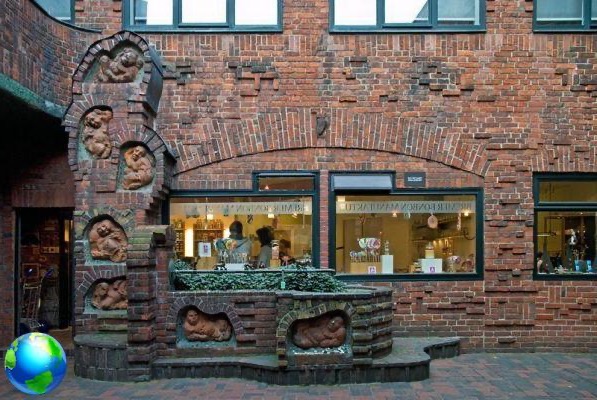 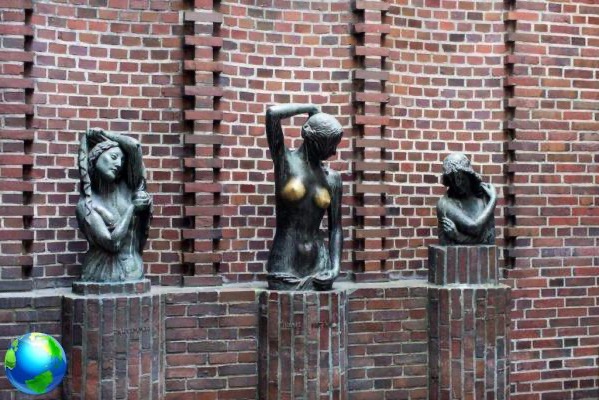 A truly unique road in its conception and appearance. In the 20s Ludwig Roselius, coffee merchant and inventor of coffee HAG, bought this street with all the adjacent buildings, transforming it into an open-air museum.
From Liberty to modern art, from the representation of old legends to art nouveau, this street even exudes esotericism! In addition, at specific times you can find everyone with their noses upwards listening to the fascinating sound of a music box (think, positioned on a roof) while on the underlying facade there are wooden tables to represent the story of the most famous sailors who were native to Northern Germany or who had to do with Bremen. 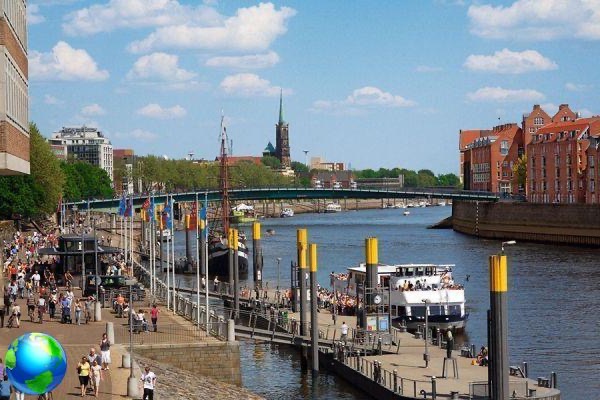 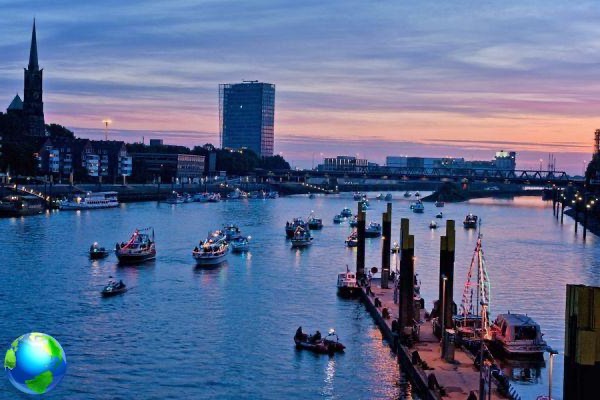 The Schlachte and the riverside

Leaving the Böttcherstraße (by the way, in Bremen all tourist routes are marked on the ground from metal studs simulating Tom Thumb's bread crumbs) you arrive in another area of ​​Bremen full of bars and pubs. The riverside offers a walk through food, beer, typical tastings and antique markets.
On the river are moored sailing ships adapted to restaurants such as theAdmiral Nelson all in the pirate theme for the delight of children or the Alexander Von Humboldt, the sailing ship with very green sails protagonist of an old beer commercial Beck's.
Speaking of Beck's, starting from the riverside with a 10-minute walk you can enter Beck's “temple” brewery and take part in a guided tour complete with a final tasting. 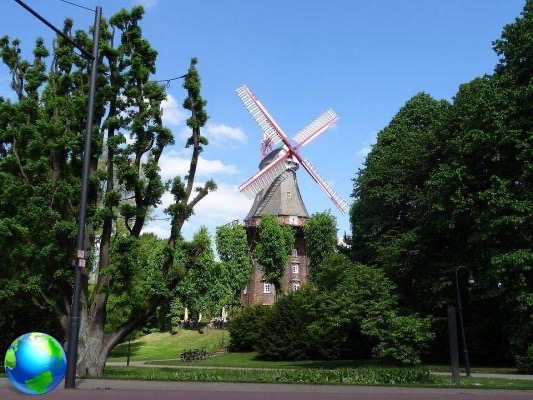 Another splendid area of ​​Bremen: this is immersed in a city park mill offers a decidedly unusual glimpse just a stone's throw from the center. In this regard, I would like to point out that all the attractions I am indicating can be easily reached on foot starting from the center of Marktplatz.
The mill is authentic and still functioning, inside there is a nice café-restaurant where you can taste the typical specialties of Bremen with a breathtaking view of the park, the canal, the well-kept vegetation and the meadows full of flowers. 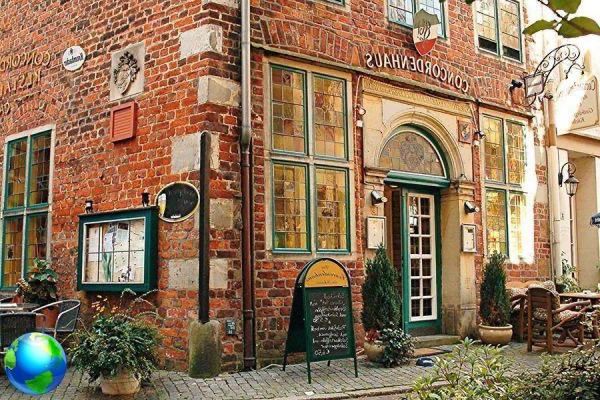 Pearls, the meaning of the name Schnoor is "string of pearls". Precious gems like the houses lined up in this picturesque district of Bremen. Narrow alleys lined with cafes, souvenir shops and houses with a vintage flavor: this is the Schnoor, the old fishermen's quarter. Renovated a few decades ago, it is a destination for thousands of tourists who flock to its narrow streets to capture glimpses and details.
I point out a really delicious place, the Teestübchen: a restaurant whose style recalls the house of an aunt or grandmother.
Here I tried the best pasta dishes eaten outside Italy so far. Don't miss it if you are in the area! 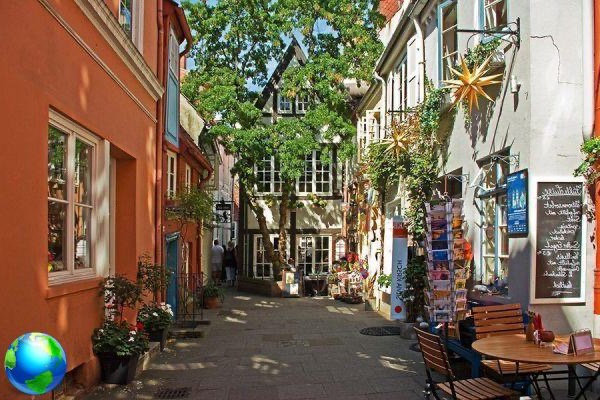 Of course, that's not all: a few minutes by tram (they are frequent and punctual) you can reach theme parks, museums or the famous "nautical mile" on the waterfront of the River Weser with shopping centers, trendy bars and ferry docks.
Or point out a unique attraction for families and children interested in science: theUniverse.
I visited Bremen in June but my obsession now is to be able to see it in December with the fairytale atmosphere of Christmas markets!

Audio Video What to see in Bremen in 48 hours
Caserta, where to eat the best desserts ❯

Fehmarn, the island of wild rabbits

Rühstädt, the city of storks in Germany

Top 5 things to do in Berlin at Christmas: tips and tricks

Rottweil in southern Germany, city of banners and carnival

The Brandenburg Gate in Berlin