Ready to discover South Dakota? The so-called "Frontier Strip", an imaginary line that separates the American states of the west from those of the east!

One of the most unexpected destinations in the United States is the South Dakota. Together with five other central states, South Dakota constitutes with the so-called "Frontier Strip". This imaginary line separates the American states of the west from those of the east and starts from North Dakota to finish in Texas passing through the Nebraska, Kansas e Oklahoma. 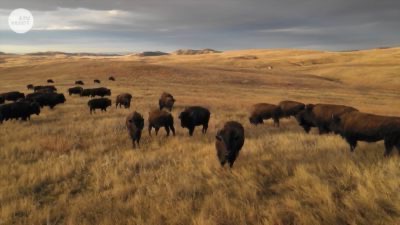 The Missouri River flows through South Dakota from north to south, sharply separating two regions of different landscapes and environments, one of the great plains and one of the mountains.

Until the moment of its entry into the American Union, as the 40th state, which took place in 1889, the Dakota was a single territory, only later was it divided between North and South Dakota.

In the area of ​​the great prairies, east of the Missouri River, a curiosity will satisfy lovers of the series “House on the Prairie”. TO De Smet in fact it is possible to see one of the houses where the main character, Laura Ingalls, who is the writer of the book from which the show is based, actually lived. 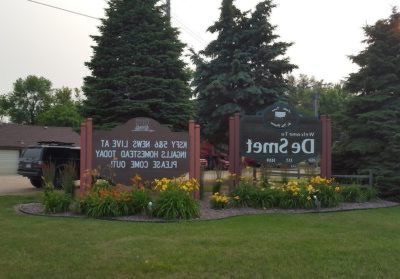 The stories of the books and therefore of the show are practically autobiographical. The writer Laura Ingalls narrated them to remember the difficult life of the early American pioneers, completely different from those of subsequent generations. In De Smet you have the opportunity to visit, in addition to the school attended by the writer and her sister, a small cemetery where some of her family are buried, but above all the Ingalls Homestead, the house on top of a hill, as told in the show.

Laura Ingalls lived in this place for a few years and today it has become a museum illustrating the life of these pioneers. Among the various activities proposed there is a ride with a covered carriage pulled by horses. Although the proposed activities are especially suitable for children, the setting and rolling landscapes of the great windswept grasslands take you back in time with scenes from the show seen as children in your eyes.

Leaving De Smet going about 100 miles south to Sioux City, you can admire the beautiful waterfalls carved into the rock from the ancient glaciers. The city takes its name from the Sioux nation, who were settled here before the arrival of the white settlers. The Sioux understand several tribe of Indians, including i Lakota and Dakota, from which the state takes its name.

To get even more in touch with Indian culture, the ideal is to move to Rapid City, in the easternmost part of South Dakota. In Journey Museum and Lerning Center you have the chance to see artifacts and tribal art objects and learn more about the history of the Sioux Indians in these lands. 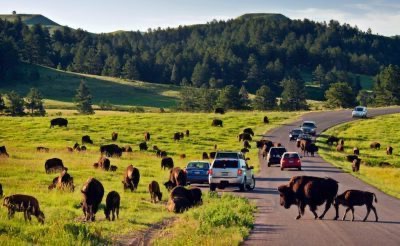 Rapid City is located near the Black Hills, the black hills, so called because of the dense forests that cover them and that from a distance seem black.
With the discovery of rich ore deposits, thousands of gold miners arrived from 1870 onwards, and Indians were forcibly displaced and locked up in distant reserves.

Among the main attractions of the Black Hills, the M is the most famous. This huge work carved on the mountain portrays the four most representative American presidents, Thomas Jefferson, George Washington, Theodore Roosevelt, Abraham Lincoln. Panoramic trails branch off from the visitor center, in the middle of the forest, and lead to the various observation points. 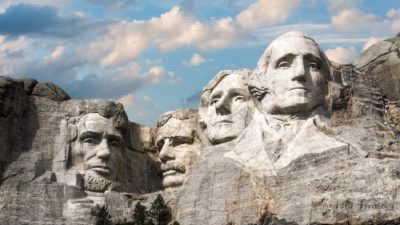 Also in the Black Hills, another mammoth sculpture carved into the mountain, still under construction, is the Crazy Horse Memorial, in memory of the Indians, who portray Crazy Horse, the Sioux tribal chief, defender of Indian rights and traditions, one of the architects of General Custer's defeat in the mythical battle of Little Big Horn.

Il Custer State Park, also in the Black Hills, takes its name from this Union colonel. The park is famous for the hundreds of bison that roam free. Along the panoramic road it is possible to spot these beasts, sitting comfortably in the car, as they roam quietly even on the roads, since the traffic limits are very low. Often in the company of bison you can also see donkeys that are called here Begging Burros. In addition to the countless species of animals and birds, you can see rock formations with imaginative shapes and beautiful lakes.

Continuing the route on the Black Hills you will come across the town of Deadwood, with its old west architecture. This settlement was founded by the first settlers who arrived with the gold rush. At that time it was a den for bandits, including the famous Calamity Jane, and prostitution and gambling were rampant. Today it is instead a pleasant place to spend some time in a carefree way.

Spearfish Canyon, in the final part of the Black Hills, offers a valid alternative if you want to cross these mountains, with exciting landscapes in the midst of forests, canyons and waterfalls of all kinds.

Bear Butte, on the other hand, is an isolated mountain, considered a sacred place by the Indians, where they go to meditation and to get closer to their spirits. Often, along the way to reach the summit, ceremonial objects and clothes are left as a sign of their pilgrimage. At the foot of this relief it is easy to see bison grazing in peace, giving an incredible view.

For motorcycle lovers, Sturgis is the ideal destination, especially during the large annual rally held in August. On this occasion harleysti come from all over the world and have the opportunity to meet other fans with whom to compare. In this locality the Sturgis Motorcicle Museum & Hall of Fame where models of motorcycles of all times and other curiosities about these legendary two wheels are exhibited.

To conclude the trip to South Dakota, can not miss the visit at Badlands, a spectacular park with time-eroded rock formations that have created huge badlands with different shades. Once this was the bottom of an ocean, which with the evaporation of water, left a deposit that was slowly shaped by atmospheric agents, creating fantastic and sometimes lunar landscapes ... what better way to greet South Dakota a land that a lot has to offer to visitors on the road.

add a comment of South Dakota, parks and Sioux Indians