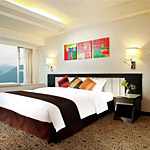 The mountain range of the Sierra Nevada, whitewashed all year round, it extends for about 75 kilometers from the province of Granada to the province of Almeria but all the highest peaks, such as Mulhacén which reaches 3480 meters above sea level, are located in the Grenadine part. Its landscape is dramatic, punctuated by torrential rivers, gorges, ravines, lakes and, at lower altitudes, the cultivated valleys of the Alpujarras, ideal for hiking, biking and horseback riding.

Il Sierra Nevada National Park, one of the two parks of Andalusia, together with the Parque Nacional de Donana, and the largest Spanish national park, extends over 86 hectares at a high altitude and is home to around 2100 plant species and around 5 ibex.

There are more than 20 peaks that exceed 3 meters of altitude and this makes it the second highest mountain range in Europe after the Alps. The Sierra Nevada National Park is a paradise for hikers, birdwatchers and climbing.

The Sierra Nevada ski resort is the largest and most popular in Spain and is located in Pradollano, about 33 kilometers southeast of Granada. The station boasts 70 ski slopes for downhill skiing for a total of 80 kilometers and slopes for cross-country skiing and snowboarding. There are also ice skating rinks and you will have the opportunity to take part in excursions with sleds or snowshoes. During the summer the ski resort allows mountain biking, horseback riding and canyoning. Finally, from Pradellano it is possible to reach the 2645 meters of altitude of the Borreguiles thanks to a cable car.

During the summer, moreover, it is possible to reach the two highest peaks of the Sierra Nevada, Mulhacén and Veleta, but given the difficulty of the route, the excursion is recommended only for professionals or at least to be well equipped and well trained. For the overnight stay there are three refuges: Refugio Poqueira, bookable and for a fee, Refugio Vivac La Caldera and Refugio Vivac La Cariguela, free and not bookable.


About 23 kilometers from Granada, on the A395 in the direction of Estacion de Esquì Sierra Nevada, there is an information center to know everything about the Sierra Nevada. Pordellano can be reached from Granada by bus (one ride a day during the summer, three rides during the ski season) while from the resorts of Hoya de la Mora and Capileira it is possible to take the bus to the Mirador de Trevelez, at 2680 m.