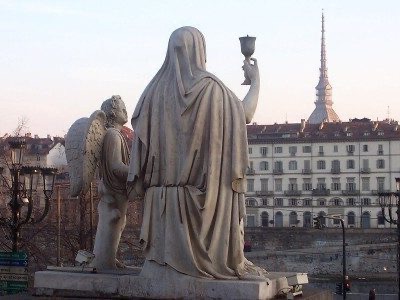 Esoteric tour between squares, churches and underground passages in one of the most mysterious cities in Italy, a Torino.

I had the pleasure of try this tour of the magical and esoteric Turin that struck me a lot and tickled my curiosity. In fact, not everyone knows what they say about the Piedmontese city. They exist in fact two triangles in the world of magic: the triangle of white magic which touches the cities of Prague, Lyon and Turin, and the triangle of black magic which includes London, San Francisco and Turin. The city of Turin is found both strangely in one and the other. From this small premise our tour begins!

The tour winds from history to news, between poor neighborhoods and noble palaces. Between the stages touch the Paesana Palace, example of an eighteenth-century noble residence in whose infernotti history mixes with yellow.

Campana Palace instead, which is located in the historic center of Turin, it offers two floors of depth for an air-raid shelter, a living and historical memory of Turin at war, one of the cities hardest hit by the bombings. Finally, the entrance to the underground car park of piazza Emanuele Filiberto. From here you go down into the iceboxes, once the big refrigerators on the market and today a crystallized memory of a long time ago.

Devil's Palace, formerly Palazzo Trucchi di Levaldigi proposes the Devil's Gate, a huge wooden door which, according to popular stories, was built in one night by the Devil. It is also said that terrible episodes took place inside it in the 800th century, including the disappearance of a French officer and the murder of the famous ballerina Emma Cochet. As terrifying as they are fascinating, these two stories linked to the most disturbing door in Turin are also fabulous carvings with various symbols, among the flowers and fruit there is also a mouse.


In the darkness of the evening Turin shows its most intriguing face showing ghosts dragons and esoteric symbols often ignored. There are also cursed stories that withstand the ravages of time, leaving traces everywhere.

Da Statuto Square, traditionally the center of magic you get to Angelica Fountain with its Masonic symbolism to the mysterious legend of the devil's door and his crimes, up to discovering the sinister guardians of the Baroque palaces, to culminate in the mysteries of the Great Mother of God, the veiled woman who holds the chalice of the Holy Grail, under the watchful eye of the most famous Turin ghosts.

add a comment from Magic Turin, esoteric tour: my experience