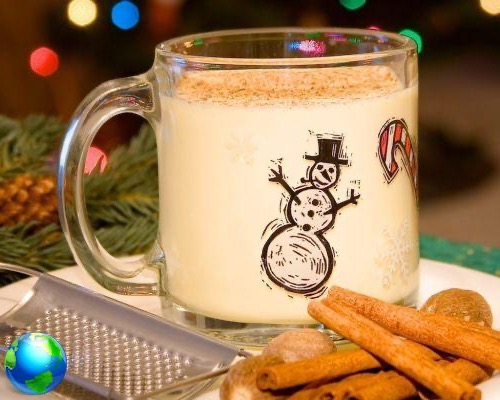 Drinkers, tasters and anyone who likes to drink anything from juice to beer, to non-alcoholic cocktails to hard alcohol this post is for you. Obviously, drink responsibly.

Starting with the soft.

Egg nog. Purely American drink, for breakfast, snacks but also to sip during meals or at least here, despite being sweet, they also drink it with salty.
Substantially it is based on milk, eggs and sugar. For the older ones it can be corrected with brandy, cognac or bourbon, for the younger ones, of course, tastes like chocolate or vanilla cannot be missing. In addition, spices such as cinnamon are added, which here in America has a very Christmas atmosphere. It is a cold drink so simple to drink perhaps with a few more calories.

Bubble tea. You can find it mainly in cafes most of Chinese origin, but also vegan origin and the like. Describing it is not easy, it has different flavors from fruit to chocolate, vanilla and the like, it can be both cold and hot (which now with this cold is easier to drink) and inside it has bubbles or tapioca balls that would be the replacement some flour for the celiacs. Telling you what it tastes like is not easy, it is a little rubbery and at first glance you may not like it but trying it will certainly not hurt you. I recommend the TARO taste if you like things like milkshakes or drinks with that texture.

Beers. I'm not a connoisseur of beers, if you put two beers in front of me I would never know which brand one or the other is. The sure thing is that I know that I don't like craft beers or even reds and that my favorite in Italy is tennents. Obviously, luck has it that this is a hard to find beer. My lack of beer culture and the lack of desire to taste different types to find my new favorite led me to choose the most famous one here, the one that sponsors most of the events and luckily mine also the cheapest one. Plubst Blue Ribbon an American beer that is actually light, perhaps for connoisseurs of beers and lovers of craft beers not even much but in most places the can especially during happy hours costs $ 1,50 therefore certainly good for pockets and thirst-quenching for the palates.

Bloody Mary. It is true that there is also here but it is one of those drinks born and raised here, its texture, its seasoning and the celery inside will delight you at any time of day.
Maybe because it's done with tomato juice mixed with vodka or gin but in some places they even give it free to sip during the famous American brunches based on eggs, bacon and the like.


And then there is the famous Dirty Martini, the drink of the stars, the drink of Sex and The City, the drink that will make you lose your inhibitions with a great class! It is very good and at the same time very strong, do not overdo it or miss the class and you will go home on all fours with the louboutins in your hand.
As the name says it is based on Martini which for example I do not like but this cocktail made me fall in love with it, it is made with Martini mixed with olive juice and obviously there will be a stick with pitted olives inside. .

add a comment from The 5 American drinks par excellence