New York is one of the largest and most beautiful cities in the world. Call "The Big Apple”Or“ The City ”is a global center for media, entertainment, art, fashion, research, finance and commerce. New York is a vibrant city, so much so that it is called the city that never sleeps.

The most famous metropolis

It is the fourth largest metropolis in the world and by far the most populous city in the United States. The city has long been the nation's gateway and landmark. The "Big Apple" has a population of approx 8,2 million people, and develops on the mouth of the Hudson River, in the southernmost part of the state of the same name and in the center of the Mid-Atlantic region.

What to see in New York

from Statue of Liberty in the port, atEmpire State Building overlooking the Manhattan skyline, from subway tunnels to skyscrapers of Wall Street, from the luminous signs of Times Square to the naturalistic beauty of Central Park, from the Yankee Stadium in the Bronx to the Coney Island a Brooklyn.

These are just some of the landmarks of New York but also of America. The city offers lots to see: museums, parks, bridges and skyscrapers, theaters, exclusive shops and restaurants,… and countless enchanting places that have made millions of visitors fall in love.

The neighborhoods and the streets of the city have become symbols of American life and reality. Here the power, wealth and culture of the United States is at full capacity in one of the largest and most symbolic skylines in the world.

The city is made up of five neighborhoods or districts, which are five separate counties.

The famous island between the Hudson and the East River, with many different and unique neighborhoods. Manhattan is home to the Empire State Building in Midtown, Central Park, Times Square, Wall Street, Harlem, the trendy neighborhood of Greenwich Village and SoHo.

The most populous neighborhood, and in the past a separate city. Brooklyn is located south and east of Manhattan across the East River. The neighborhood is known for its artists, live music venues, beaches and Coney Island.

It is U-shaped and is located east of Manhattan, across the East River, and north, east and south of Brooklyn. Queens is home to two of the city's international airports, the New York Mets baseball team, the United States Open Tennis Center, and the megacity's second largest Chinatown. With more than 170 languages ​​spoken, Queens is the most ethnically diverse region in the United States, and one of the most diverse in the world.

Located north of Manhattan, the Bronx neighborhood is home to the Bronx Zoo, the New York Botanical Gardens, and the New York Yankees, the city's professional baseball team.

Staten Island is a large island in New York Harbor, south of Manhattan. Unlike the rest of this gigantic metropolis, this neighborhood has a bit of a suburban character.

Getting around in New York

The best way to get around New York is in metropolitan, there are several metro lines. Before traveling, it is advisable to study the metro map, the various lines to be used and the stations where the main attractions are present.

The movements by taxi they are not expensive if the ride is short. In addition, a ride in the classic New York yellow taxis so suggestive, is one of the most beautiful experiences that can be done in the Big Apple.


The movements by car they are not recommended, both because getting around in a city as big as New York is not so easy, and because the cost of parking, especially in the tourist area of ​​Manhattan, is quite high.

Read also: How and where to rent a bike in New York

Where to eat in New York

Eating in New York is one of the main "attractions" of the city. There are many restaurants from the cheapest to the most luxurious, representing the entire world cuisine.

The cheapest solution is fast food, street food or supermarkets that offer ready-made dishes. Eating in the most luxurious restaurants and the panoramic restaurants at the top of the skyscrapers can be quite expensive, well over $ 100 per person.

Where to sleep in New York

New York hotels and lodges are quite expensive. In order not to spend a lot and find the best offers, it is definitely worth booking in advance. If you are looking for economical solutions, you have to aim for hotels outside Manhattan and then reach the center of New York by public transport.

The best (and most expensive) area is still Manhattan. Sleeping here can be more expensive but it saves time and money for travel. The main attractions are in this neighborhood.

Every day there are numerous direct flights from Spain to New York. Direct flights depart from the airports of Milan, Rome and Venice. While if you want to leave from other Spanish airports you have to accept a stopover and 2-3 hours of travel more.

Lately, low cost airlines have also entered to cover the routes between the old and the new continent. From Spain i low cost flights to New York depart from Madrid and Barcelona, ​​and are operated by Norwegian airline.

If you want to arrive from other American cities like Chicago, Boston, Philadelphia and Washington, a rental car is fine too. In a couple of hours maximum you will arrive in New York. While for the other more distant cities better than internal flights. There are numerous low cost airlines offering cheap fares to 3 New York airports.

In America there are also a lot of travel between cities in bus. They take a little longer than airplanes but offer comfortable travel and low fares if you book in advance.

Even though New York is home to one of the most famous and largest train stations in the world, travel on the train in america it is not the best solution.

The video is in English with Spanish subtitles. 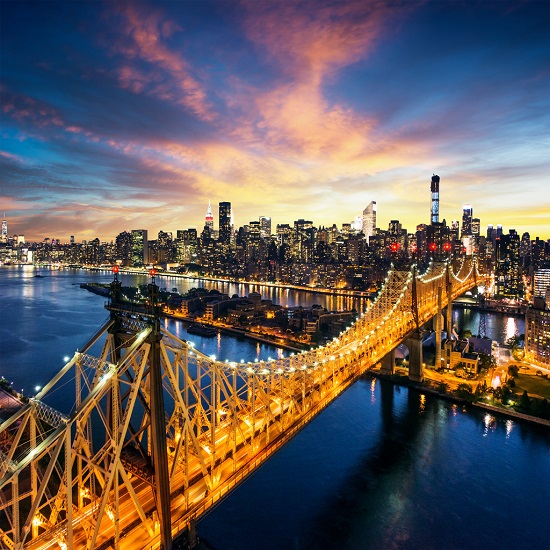