Kukai Restaurant in Naples: where to eat excellent sushi 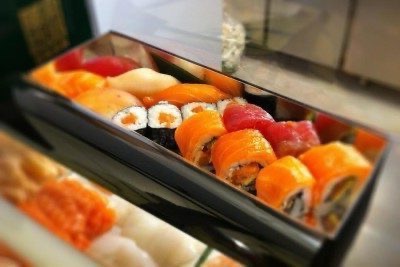 In the city of the Sun, the Mandolin, coffee and the undisputed homeland of pizza, the flavors of the Italian culinary tradition give space also and above all to foreign cuisines: you never thought that we Do Neapolitans eat pizza for breakfast too ?!

Most of the places offering ethnic cuisine are located around the area Via Bausan, not far from Piazza Amedeo and the very central and chic Via dei Mille. But if you pass through Naples and you are not like that Pizza Addicted, if you love the subtle but strong flavors of Japanese cuisine, the Kukai Restaurant is for you.

Hidden between the large illuminated signs of the pizzerias and the few craft shops that survived the glories of technology and consumerism, on the corner with Piazza Trieste and TrentoStands Kukai with a unique and very particular atmosphere. In sharp contrast to the splendor and the thousand colors of the exterior, the Japanese restaurant stands out for its atmosphere and for the elegant and dark furnishings, embellished with installations of soft lighting.
The search for elegance and excellence with which the furnishings have been carefully chosen, have ensured that the restaurant was the protagonist of numerous photographic services by well-known names in international photography with publications in glossy world magazines.

In addition toenvironment, Kukai offers its guests a real journey through flavors and flavors Japanese smells: a team of expert chefs are ready to delight customers' requests for both dinner and lunch. Not only the freshness of the products stands out, but also the quality and care with which they are selected and cooked. Don't miss the Tempura and Sake Thai.

The pride of the restaurant is the service Tatami: it is possible, in fact, to reserve an entire room inside the restaurant for up to six seats in which guests can enjoy the cuisine of the restaurant served by a waitress dressed as the Japanese tradition wants. A few years ago, through the collaboration with a well-known Vesuvian wine company, Shiro was born, a wine created specifically to accompany and enhance the lush universe of flavors of Kukai.

Impeccable and available on staff who shows himself polite and exhaustive to every minimum request: the merit is clearly of Massimiliano, the founder of the place. His meticulous and exemplary attention to detail, as well as the staff, is due to his love for Japan, as he tells me in a telephone chat.
“I studied for two years in Japan. I used to go back to Naples only for short periods and during the holidays "and he tells me that as well as all good ideas, Kukai is born absolutely by chance. “Whenever I came back here for short periods and was craving Japanese food, I didn't know any place to eat it. Once, then, with my sister Monica I started looking for him in earnest and I realized that in Naples there was no restaurant with Japanese cuisine. So we put on a take away of Japanese cuisine, it was 2003. "

And then he adds, "But the habits of the Italian people are a little different from those of the Japanese: although it was a take away, people stopped to eat and gradually crowd grew. From this then we realized that the restaurant was the right solution. And here we are, in our current location which has been going on for quite a few years ”. Kukai, therefore, offers a menu of excellence with prices that are not exactly low cost, but we know that the quality and the refinement of pay. Or almost, because Kukai has also collaborated with Groupon and Groupalia, offering menus at affordable prices.
What to add ?! Ah yes Happy appetite or better ど う ぞ お 召 し 上 が り く だ さ い

Audio Video Kukai Restaurant in Naples: where to eat excellent sushi
A corner of Naples in Milan: dinner at Fresco & Cimmino ❯

add a comment of Kukai Restaurant in Naples: where to eat excellent sushi