In China the largest Buddha in the world 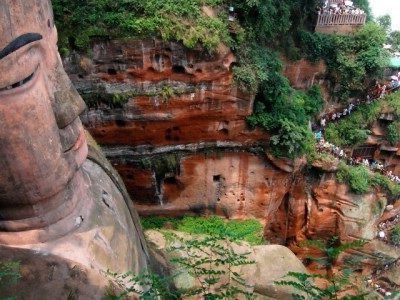 For over a thousand years, the point where the three rivers Minjiang, Dadu and Qinqyi meet has been constantly watched by the peaceful eyes of the great Buddha carved into the rock. We are a Leshan, in China, in the province of Sichuan, in an area declared a UNESCO World Heritage Site for the richness of its landscape, art and culture.

As is often the case in China, every great monument carries one with it legend. Tradition has it that the massive excavation was initiated by a monk in an attempt to curry favor with the divinity and calm the turbulent waters of the three rivers. It took a century, but in the end the grandiose project was completed, with the result that the mass of rock removed from the wall diverted the course of rivers, thus calming the waters.

To see the Buddha closely, one has to arm oneself with that mysterious patience of the Orientals, and put up with it long tail (perhaps under the sun) to descend into a bottleneck that descends into the rock beside the Buddha; or opt for a smoother boat ride overlooking the river.

Leshan Giant Buddha Scenic Area is not just the giant Buddha. Includes very ancient Buddhist temples, walks in the woods and numerous sculptures carved into the rock of every dimension: between caves, caverns, stairways, the path is full of surprises and allows you to discover the imaginative imagination of the ancient monks who lived in the region and who patiently over the centuries they transformed the mountain into a forest of sculpted figures.

Audio Video In China the largest Buddha in the world
Sugar & Spice: American taste in Florence for Thanksgiving ❯

Zhujiajiao, Shanghai, the village on the water

Beijing: how to get around. Practical and low cost advice

In the Macao of the Portuguese

The Great Wall of China: which traits to see starting from Beijing