What to see in Hong Kong 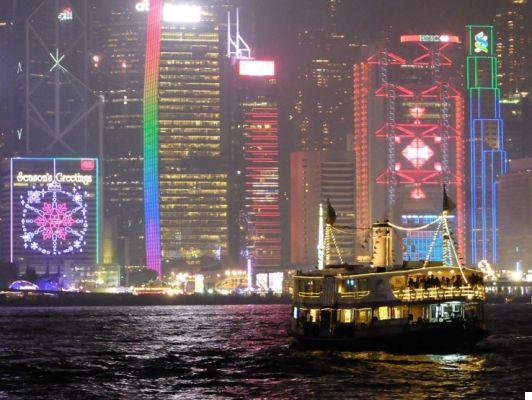 The first time I was in Hong Kong I kept twisting and turning the map before figuring out how it was oriented, where the center was, etc. When I went back the second time… same story! It is a city that confuses me, made up of many islands and a small piece of land.  Hong Kong it is full of contrasts, from very tall skyscrapers all attached to each other (with millions of people moving around like ants), to uninhabited green mountains, with the sea as the only view as far as the eye can see. In Hong Kong, just take a few metro stops to find yourself on a semi-deserted beach: a unique metropolis!

After its return to the Chinese government in 1997, it is still a city divided between its being today former British colony it's a Chinese city real, and you can breathe this everywhere. The population is mixed, many Chinese yes, but also many Westerners who were born here; almost everyone speaks English (especially on Hong Kong Island, the financial center of the city) and the standard of living is very high. Dozens of shopping malls with luxury boutiques (I've never seen so many Prada, Cartier and Gucci stores in so few square meters!), Super luxury hotels, restaurants and chic clubs everywhere. In fact, there is also the popular Hong Kong, the older one of Sheung Wan or that of Mong Kok, in which it seems rather to be on the set of “Big Trouble in Chinatown”. Another thing that strikes a lot when you arrive in Hong Kong are the climbs; it's all up and down, escalators that save you time and effort. We are certainly not used to seeing such tall skyscrapers built on very steep climbs. In some places you can hardly see the sunlight. But when you climb Victoria Peak the view of the bay is amazing! A tip, try to stay in Hong Kong at least 4/5 days to be able to see and appreciate the different facets of the city and explore the various islands.


If you want to get an idea of ​​the city immediately (and if you chew English) I recommend join a free tour of 2 hours and a half which will allow you to orient yourself and explore the whole center starting from the Tsim Sha Tsui Clock Tower. 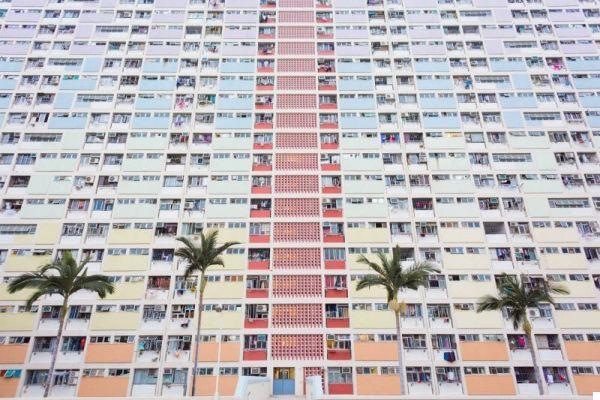 When to go to Hong Kong

I've always been there in winter, between November and December and, from what I understand, it's the best time. In fact, in winter the temperatures are still mild (often above 20 degrees) and the sky is clear. In January and February it is colder and cloudy, then in the spring / summer the heat and humidity make you dripping with sweat and it rains a lot.

You don't need a visa to enter Hong Kong!

Unlike the rest of China, you don't need a visa to go to Hong Kong. However, if you move within China sooner or later, you have to do it. To obtain it, you must go to the Chinese Consulate in Rome or Milan by first filling out the form you find online, and then bringing a passport photo and a copy of the hotel and flight booking. A single-entry visa costs around € 100 and takes 5 working days to obtain (with the normal procedure).

Unlike the rest of China where social media doesn't work (Facebook, Twitter, etc.) and you have to download a VPN to access it, everything works in Hong Kong the same as in Europe and wifi is everywhere.

In Hong Kong the Hong Kong dollar is used (still not for long, it seems) and the cost of living is high, especially for sleeping and eating. Calculate that a room in the center of an air b & b costs more than 100 euros per night! To spend a little less you can consider sleeping in Kowoloon, but it is not very convenient for visiting Hong Kong Island. A holiday in Hong Kong costs about the same as going to London or New York.

Ad Hong Kong our health coverage is not valid. My advice is to always take a classic medical-luggage insurance that can cover you during the trip. I am very comfortable with many insurers, a site that compares the policies of different companies and proposes the most convenient policy for that particular trip. To do this you will have to enter the data relating to your trip (country, duration, etc.) and they will send you an email with the best proposal that you can then buy directly online (being my readers you will also be entitled to a 10% discount!!!). 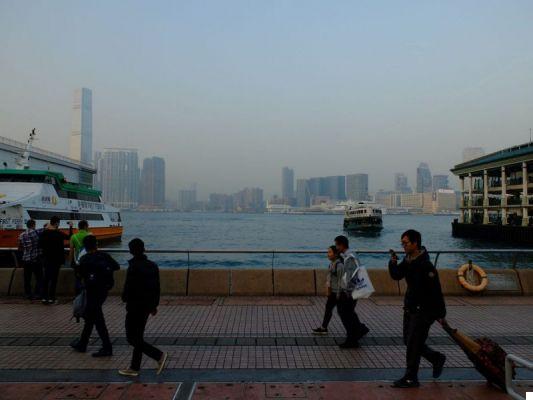 What to see in Hong Kong: the attractions not to be missed

The first approach to the city in my opinion must necessarily pass through the old city, or the historic district of Sheung wan. This neighborhood has retained an old-time Chinese atmosphere. Small shops, flea markets selling amulets, antique shops and ancient temples fill the alleys that climb up to the Mid Level. Above all, do not miss the suggestive Man Mo Temple, one of the oldest Buddhist temples in the city and one of the most popular, pervaded by the smell of incense and flowers. Just above the temple, on Tai Ping Shan St.art district in Hong Kong, three / four streets full of galleries, murals, nice clubs and restaurants. This area is nice both day and night, and the bars and clubs are less commercial than those in Soho; stop for tea and a slice of Teakha cake. 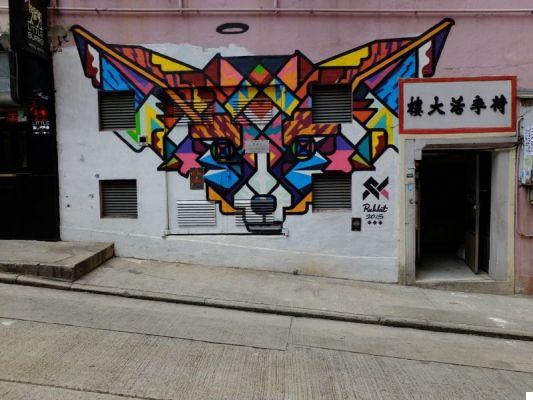 Surrounded by towering skyscrapers, this super-central park features fountains, sculptures, greenhouses, a zoo and a magnificent aviary. Take a walk, both to shelter you from the sun and the heat, but above all to enter the aviary (the Edward Youde Aviary). There are more than 800 birds that belong to 100 different species, some really super colorful and here you can see them up close. 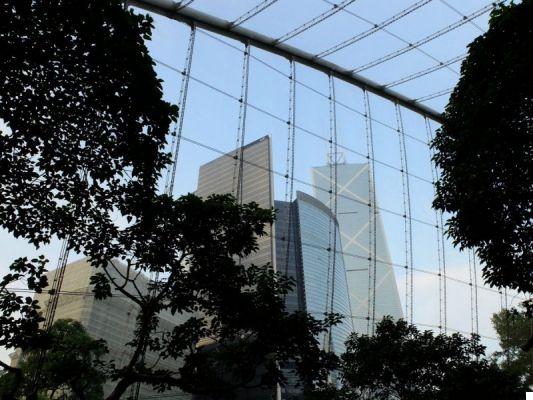 Il Peak (the highest point on Hong Kong Island), it has been the quintessential residential neighborhood since the colonial era, and it is also the most exclusive area of ​​the city. A house here costs a fortune! To go up to the Peak you go with the Peak Tram, a kind of funicular; you will have to queue, but it is absolutely worth it. Once you get there, you can admire one of the most beautiful urban views in the world and, above all, realize the size of the city. To get off you can walk along the hairpin bends and return to Central to have a super aperitif with a view of the rooftop of the "Sevva" (on the 25th floor of the Prince's Building).

You may also be interested in: Imperial China: Beijing, Xian and the Great Wall 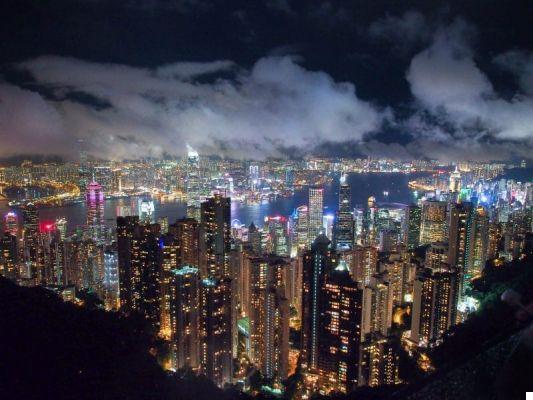 Opposite Hong Kong Island there is Kowoloon, and from its "tip", called Tsim Sha Tsui, you will have the most beautiful view of central Hong Kong. Go there in the evening, after dark, when all the skyscrapers on Hong Kong Island light up. Every day at 20pm there is a sound and light show and many people flock to the "promenade" to see the play of light in time with the music on the skyscrapers (but only go if it's a clear day, otherwise you won't see anything ). An experience not to be missed is to get to Kowoloon by taking it Star ferry from the Pier or Hung Hing Road on Hong Kong Island. These boats have been in operation since 1888 and the crossing (10 ') is particularly romantic in the evening. 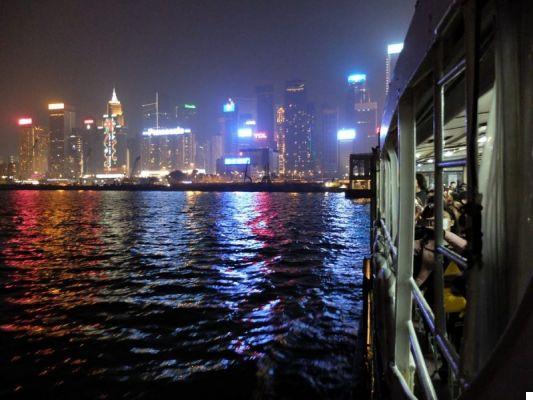 Kowoloon it is the most commercial area in Hong Kong, here we are many markets (divided by streets according to the merchandise) and shopping centers for all budgets. Also here is here the Peninsula Hotel, one of the most luxurious and oldest hotels in the world; take a tour in the beautiful hall and go for an aperitif with a view at the Felix, the venue / restaurant designed by Philip Stark on the 28th floor of the hotel. Mong kok instead it is one of the most chaotic working-class districts of the city, but it has some beautiful markets. Don't miss the Flower market, Bird Garden (the bird market), ladie's Market and Sneaker Street (as the word itself says, here you will find ALL the sneakers in the world!). All these markets are between the “Mong Kok” and “Prince Edward” metro stops. 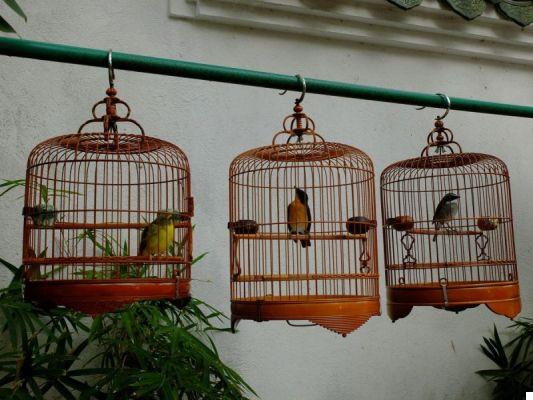 To escape the crowds of Hong Kong and find some tranquility and relaxation, theLantau island it is perfect and can be easily reached by metro. Once on the island you can then decide to take the famous panoramic cable car Ngong Ping Skyrail and go see the Tian Tan Buddha on the top of the island (recommended only if you do not have to do 3 hours in a row, as it almost always happens!), or take a bus (N.11, 11A or 23) and ask to be dropped off at Cheung Sha Beach. You will have the impression that you have been made fun of and dropped into nothingness, but have faith .. after a few meters from the stop you will see a small road that leads to the beach. This beach is very nice and relaxing, there are 2/3 bars (The Beach House is very nice), surfboard rental and lots of surfers to watch. Around only the green; you will have the feeling that you have taken a plane to go to a distant island. From there, there is then the bus (1, 2 or 4) to go to Silvermine bay where the hydrofoil departs from which will take you back to Victoria Harbor.

Other things to see / do in Hong Kong : a trekking on the Hong Kong Trail, the Ping Shan Heritage Trail and a trip to the beach (with a view of the surfers… which doesn't hurt) to Shek O (Chain Wan subway stop, then bus). 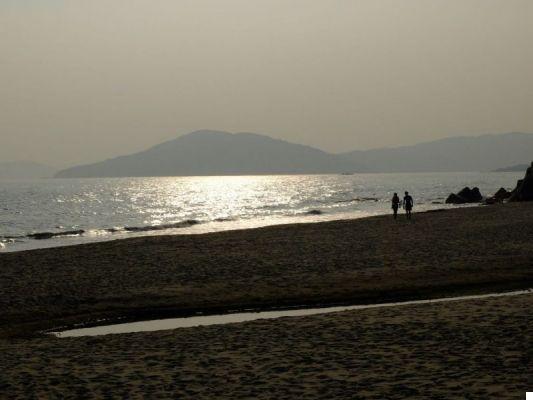 Where to eat in Hong Kong 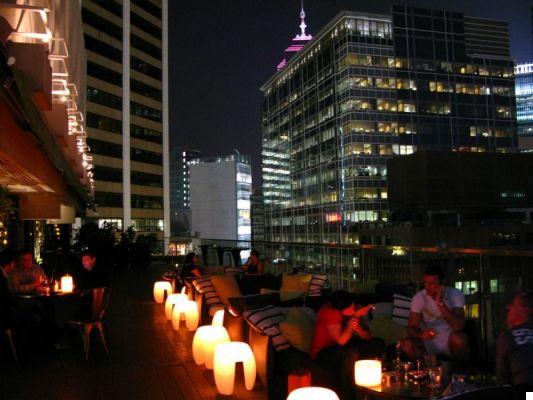 In general, Hong Kong nightlife is mainly developed in Soho (above Central). In these streets there are many bars, restaurants and clubs. If you go there..you can't go wrong !!!

Where to sleep in Hong Kong

Sleeping in Hong Kong is quite expensive, especially on Hong Kong Island (which I still recommend, especially if you don't have many days). The cheaper alternative is to find a room on air b & b, which in any case will cost you around 70-100 euros per room. The first time I was in Hong Kong several years ago I had stayed in this hotel and it was not bad:

What to see in Hydra, the car-free island of the Peloponnese ❯

In China the largest Buddha in the world

Zhujiajiao, Shanghai, the village on the water

Beijing: how to get around. Practical and low cost advice

In the Macao of the Portuguese

add a comment of What to see in Hong Kong