How to get to New York by plane, car, bus or train

The four most common ways to get to New York I'm by plane, by car, by bus or by train. From Spain you can usually reach the big apple by plane. But it can happen, if you are doing a tour of the United States of America, especially the eastern side, to arrive by car. It is also possible to arrive by train or bus from various American cities. The cost of travel on the train it is often high while the choice to arrive in bus, especially if you book early enough, it can be a good low cost choice.


Getting to New York by plane

New York has three main airports: JFK (John F. Kennedy), The guard e Newark. These three international airports make New York the main gateway to the United States. From Spain there are direct flights to New York from Madrid and Barcelona. And you can buy flights with just one change practically from all Spanish airports.

So if you haven't booked your flight yet, the important thing is to book your flight as soon as possible and then look for how to get to New York from the airport where you land.

Getting to New York by car

If you arrive by car in New York, it is advisable to choose a hotel with car parking. If the hotel does not have parking, it may be quite expensive to park in public parking lots.


An inexpensive solution is to book the hotel outside of Manhattan and then reach the center of New York by public transportation. This way you will have more parking options and much cheaper too.

Getting to New York by train

Traveling by train in the United States is quite expensive. The main train station in New York is the station Grand Central Terminal located in Midtown Manhattan. Even if you don't arrive by train, a visit to this station is highly recommended as it has been filmed in numerous films and television productions over the years.

Arrivare a New York in bus 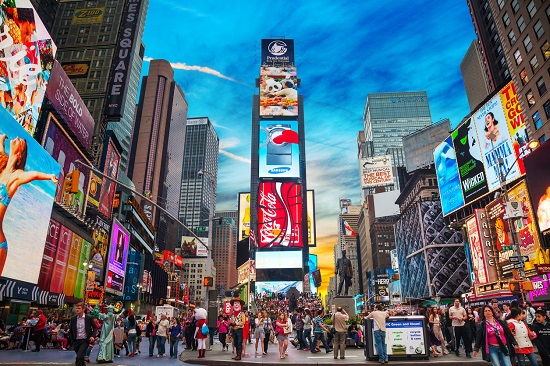 Times Square – New York, USA –
How to get from New York to Niagara Falls ❯

add a comment of How to get to New York by plane, car, bus or train