Getting to Paris from Paris Charles de Gaulle 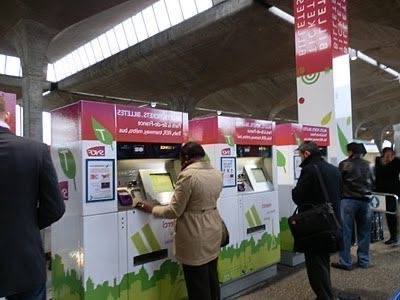 THEParis Roissy Airport, in French Aéroport de Paris Charles de Gaulle it is located about 25 km from Paris and once you land here you will have at your disposal several transport options to move to the center of Paris, only one of these is the cheapest.

1 option, the line RER, the suburban train. Taking it is also very easy because the RER here is the first stop, that of Paris Charles de Gaulle which goes directly to central Paris. Always follow the directions Paris by train and you won't get lost. The time is about 40 minutes and the price is € 18.20 round-trip, quite a lot, it's true. Importantly, the RER ticket is also used to exit and gives you the right to enter the subway immediately afterwards, don't forget it, so you save a ticket.

2 option, taxi. Taxis in Paris are not too cheap and to go from Paris Charles de Gaulle to Paris you have to pay 40 / 50 €, if you are at least 3 you go even, otherwise you just lose alone. We must also consider the traffic of Paris though.

3 option, the buses. The bus line of the RATP they make the shuttle service between terminals 1, 2 and 3 and Paris with departures every 15 minutes from 6 to 19 and every 20 between 19 and 23. The duration is about 50 minutes. Tickets can be purchased directly on board the bus. The cost of a one-way ticket is 10 €

To remember. If you are a fan of Disneyland Paris, remember that from Paris Charles de Gaulle it is possible to reach the amusement park with a shuttle operated by VEA which departs from the 2E / 2F terminal and which for this route has a cost of € 18 each way for over 11 years, € 15 for children between 3 and 11 years old and free for children under 3 years of age .

Audio Video Getting to Paris from Paris Charles de Gaulle
Sea in winter: what to do in Orbetello ❯

Getting around Paris, the new metro fares

Le Nid: a glass of Muscadet in Nantes

Getting around Paris: updated rates and routes

5 unmissable things to see in Nice