Costa Brava Pyrenees of Girona: the perfect destination at any time of the year 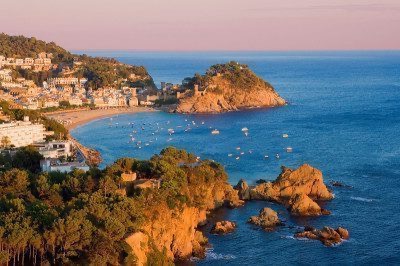 La Catalonia is one of the favorite destinations of Italians, who reached it last year in more than a million to enjoy the beauties of Barcelona, ​​as well as the sea and the nightlife of the famous Costa Brava. No wonder the stunning coastline of this region in northeastern Spain has been proclaimed one of the top tourist destinations since National Geographic and one of the top 20 destinations from Traveler magazine.

The best known city of Catalonia is undoubtedly Barcelona, famous for its party atmosphere and the fascinating architecture of Gaudi. The entire region, however, is made up of an extraordinary variety of tourist activities ranging from bathing on the Costa Brava to high-altitude fun for Pyrenees of Girona, from culture to gastronomy.

The Costa Brava extends from Port Bou in Blanes for 220 km, along which it is not difficult to find paradisiacal coves and a rich vegetation. Thanks to its pristine beauty, 33% of the territory falls within the protected areas, and twenty beaches and eight ports in 2012 were awarded the blue flag for quality and cleanliness of the water.

For those looking for adventure on vacation, the Costa Brava is home to 7 natural parks, among which the Garrotxa Natural Park stands out with its imposing volcanoes. Unmissable is one of the many patrol paths to discover small coastal villages and streams set in nature.

In addition to the sun and the sea, this area offers activities of trekking, cycling and above all golf, a sport for which Today's Golfer has proclaimed the Costa Brava among the top three best destinations. The more daring can instead devote themselves to extreme sports, such as skydiving which is practiced above all in Empuriabrava, where the largest skydiving center in Europe is located.

Although the region of Girona is known above all for its sea, it must not be forgotten that it also contains the impressive Pyrenees of Girona, defined asentrance door' in Spain, bordering on France. Here there is no shortage of activities and fun on the snow at high altitude. Exploring the surroundings you will discover medieval towns with still perfectly preserved walls, as well as parks and botanical gardens with native and plant species.

La gastronomy plays a fundamental role in the tradition of the region, from which come chefs of the reach of Juan Roca and Ferran Adria and in which El Celler de Can Roca is located, which is at the top of the ranking of the 50 Best Restaurants in the World. On the other hand, Girona is part of Catalonia, whose gastronomy rich in local products is nominated by Unesco to become a World Heritage Site.


How not to mention the capital of the region, Girona, which is too often put aside for the more famous Barcelona. Girona is one of the cities with the highest standard of living and is a concentration of architectural and cultural differences: from the Jewish quarter, to the gothic cathedral, to the Arab bath, to the numerous bridges over the river, up to the walls.

THEaccommodation offer wide and diversified, it makes the region accessible to different types of holidays, for all budgets. The variety of landscapes and tourist and cultural activities, combined with the renowned local cuisine, make the Costa Brava region of the Girona Pyrenees a perfect destination for any time of the year.

add a comment of Costa Brava Pyrenees of Girona: the perfect destination at any time of the year