By car from Los Angeles to Las Vegas: useful information and stages

Here's how to plan your little one on the road from Los Angeles to Las Vegas, the best stops between cultural visits, landscapes and shopping. Travel suitable for those who dream of the great American highways!

How to organize your on the road from Los Angeles to Las Vegas?

265 miles (About 426 km) separate Los Angeles from Las Vegas. A car trip of just over 4 hours through the Californian landscapes and the Nevada desert, also skirting the Mojave desert. 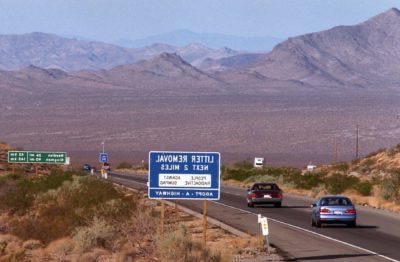 Los Angeles - Las Vegas: a little on the road

How is it to face this little on the road? Certainly tiring, but if you plan some stops along the way, definitely fun and doable. Before talking about what to see along the way, I would like to focus on some more technical aspects of the route.

We have rented a car at the Los Angeles airport that allowed us to independently tour the city and stay outside of Downtown, to be precise in Venice Beach. Of course, it is up to you to decide, based on your budget and your personal taste, which model you prefer. One happened to us Nissan Sentra: Brand new very comfortable and convenient both to drive and to live as a passenger. The change obviously it will be automatic, it is very difficult to find manual transmission cars in the United States. If it's your first time, don't worry, there's nothing easier to drive! Inquire before departure or ask for some instructions directly at the car rental.

How to get organized

Our trip took place in late October, the temperatures were hot but not excessively, with highs of 35 degrees along the way. Nevertheless, we started with one stock up on water and some snacks. My advice is to do the same, but if for one reason or another you are unable to stock up on provisions before departure, don't worry, there are small towns and petrol stations resale supplies. If your trip will take place in the summer, be careful not to overheat the car where you climb in altitude.

Petrol chapter: obviously don't find yourself in the situation of having to do it urgently along the way, I recommend that you fill up before leaving. For us it was enough to get to Las Vegas without having to refuel, but this obviously depends on the car. Although there are towns, some spots are more deserted for many miles, so refuel as soon as possible.
I admit that before leaving I didn't find many route information, when we left I was a little afraid and my imagination galloped towards deserted streets and the absolute nothingness of the landscape. I have never been happier to be wrong.

The highway Los Angeles Las Vegas, what to expect

The highway is basically an infinite straight a two lanes in each direction which crosses beautiful landscapes, from the flat horizon of the desert to small barren mountain ranges to cross. There is only one passage of about 16 miles that you will find 1 hour away from Las Vegas with a fairly important descent, but nothing to worry about, just pay the usual attention.
As anticipated, along the route there are towns with shops and restaurants and the road is busy, so don't worry, you won't find yourself alone in any stretch.

If you don't have internet access, be sure to download offline Google Maps maps before departure, as we did. You will not have the updated details on the traffic situation but the directions are precise even if you want to make some short stops or detours along the way.

We left in the early afternoon from Los Angeles as we wanted to enjoy the evening wandering around the crazy casinos of Las Vegas and we made a stop to stretch our legs and some fresh air halfway, choosing to stop the next day on the way back. It is obviously up to you to decide how to organize yourself based on your itinerary and the time available. Last thing: there are no tolls to pay as the motorway is free.

The first stop was a 20 minutes from Las Vegas: The Seven Magic Mountains. A modern work of art in the middle of the desert. Incredibly abstract and interesting. It is about 7 buildings made up of colorful stone blocks that stand out against the almost monochromatic landscape and the deep blue sky. 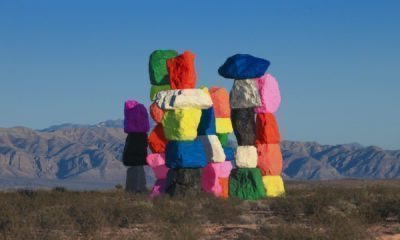 A very picturesque place where the artist Ugo Rondinone he wanted this pop art installation, a critique of places like Las Vegas, a mix of nature and artificiality. The stop will not take you more than half an hour, time to take a tour and some photos in the midst of the colorful giant towers.

The second and third stops are close together, about halfway between the two metropolises. First, coming from Las Vegas, you will encounter the Ghost Town of Calico.

Once home to a town built by the silver miners at the end of the 1800s, it was later abandoned due to the collapse in the price of silver. At its foundation it had 100 inhabitants, to reach 1200 inhabitants at the peak of its greatness.
Calico was recovered and restored to make it an interesting tourist spot in the 50s. 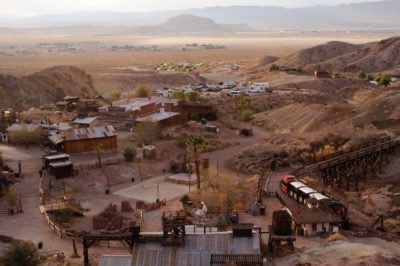 The buildings are partly original and partly restored, the feeling one gets during the visit is to almost enter the set of a film, halfway between a western and a horror. Particularly if you visit it close to Halloween when it is all decorated for the occasion.

What to see in Calico

Many buildings can be visited, among them Lucy Lane Museum, home of one of the best known towns of Calico. Interesting not only for some original period furniture and the structure of the house itself, but also for original photographs of the inhabitants and the activities that took place in the city. Slightly outside the town compared to the other buildings, is the old school. Inside are still the blackboard and desks.

The barber shop, the prison, as well as other buildings that now contain small shops, saloons or restaurants are worth a visit although perhaps the most interesting places are Maggie Mine, the only mine that can be visited and the tour on the Calico Odessa Railroad train with 10 minutes of curiosity and a splendid view of the surrounding landscape.

The entrance to Calico is quite low cost and some attractions have a separate ticket such as Maggie Mine and the train ride. A pass can be purchased which includes Maggie Mine, Gold Panning and Mystery Shack and which allows, in addition to visiting the mine, to live an experience of searching for gold and some natural mysteries. It takes a couple of hours for the complete visit of the town. 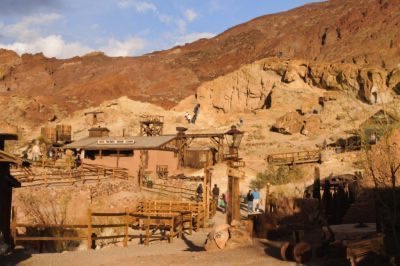 The third and last stage, the most frivolous, is dedicated to shopping at Barstow Designer Outlet. Here you can buy some of the most famous American brands at affordable prices to say the least among which you can find Nike, Michael Kors, Calvin Klein and many others. The outlet is approximately 20 minutes away from the ghost town of Calico. This is not a huge outlet with many shops, but it is certainly an interesting stop for all the shopping addicted especially because the various signs are really well stocked with a wide assortment and as already mentioned the prices of the products are incredibly discounted compared to normal shops.

Audio Video By car from Los Angeles to Las Vegas: useful information and stages
How to get to Lake Bled and where to sleep ❯

add a comment of By car from Los Angeles to Las Vegas: useful information and stages