What to see in San Francisco: the attractions not to be missed

A collage of colorful neighborhoods and stunning views, San Francisco is one of the most beautiful cities in the United States and the jewel of Northern California. The city is full of history, great neighborhoods, parks, beaches, museums and a huge range of entertainment options. Let's find out what to see in San Francisco: the main attractions.

Some of the most important attractions, besides the famous bridge, are the historical one Alcatraz island and Fisherman's Wharf. In the city center there is Golden Gate Park, a huge green space with all kinds of things to do. There Chinatown San Francisco, the largest of its kind in North America, is definitely worth a visit.

To take an interesting city tour, you need to hop on one of the historic cable cars that stop at many of San Francisco's best sites. The city boasts stunning views, world-class cuisine, cozy cafes and many booming nightlife venues.

What to see in San Francisco 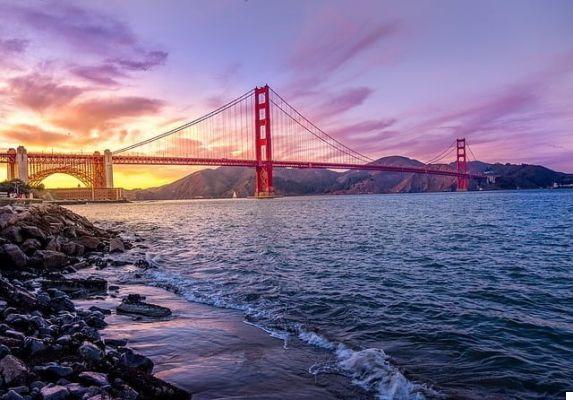 What to see in San Francisco - Golden Gate Bridge -

Once called "the bridge that could not be built", today it is one of the wonders of the modern world. This magnificent bridge, perhaps San Francisco's most famous landmark, opened in 1937 after a four-year struggle against winds, fog, rocks and tides.

Il Golden Gate Bridge is a California icon gracing the San Francisco Bay. It is the most photographed site in the city, with its orange structure suspended over blue waters. This nearly 3km bridge connects San Francisco to the other side of the bay. Its sidewalks are open during the day to pedestrians including wheelchair users and cyclists. 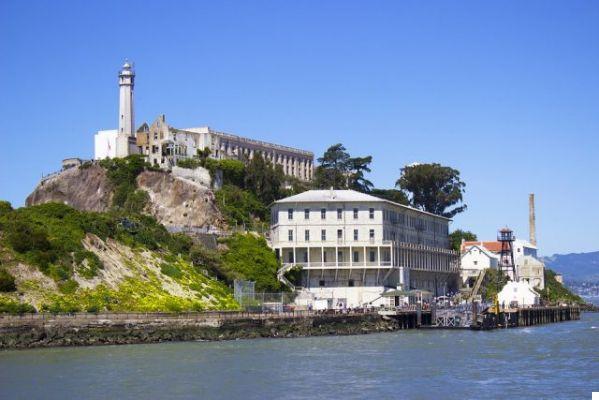 When it functioned as a federal prison from 1943 to 1963, Alcatraz it was home to gangster Al Capone and a number of other hardened criminals, many of whom unsuccessfully attempted to escape over the years across the chilly, rough waters of San Francisco Bay.

Today it is a museum that offers a really captivating tour complete with sound effects that recreate prison days. But the journey to Alcatraz is just as fun. The only way to get there is by ferry, which the kids will love, with a short ride across the bay.

Alcatraz is open every day of the year, except Christmas and New Year, with tours starting most days at 9am. 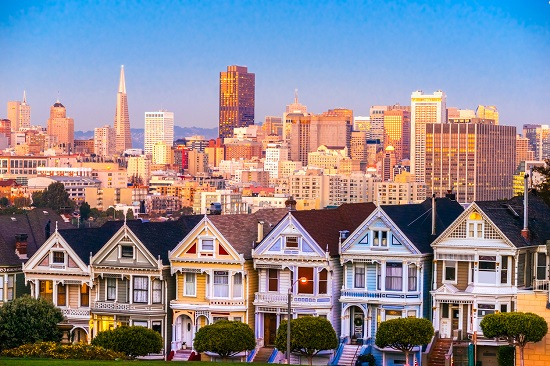 Often seen in movies and most commonly recognized by the opening credits of "Full House" (Daddy's Friends, an American sitcom that aired from 1987 to 1995), Alamo Square is the place to go in San Francisco to see the row of Victorian houses known as le  Painted ladies.

Alamo Square is actually a park, the size of four blocks, on top of a hill overlooking downtown San Francisco. The park offers a playground, a tennis court and large green spaces to relax and enjoy a picnic with fabulous views. 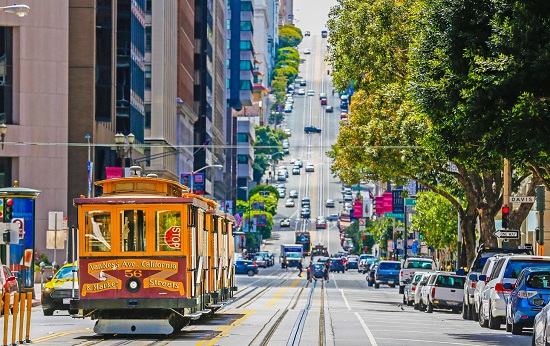 The cable cars, introduced in San Francisco in 1878, they remain a popular form of public transport today. They are also a great way to get to the most beautiful viewpoints in the city, from which to enjoy some of the best views San Francisco has to offer.

All three of San Francisco's cable cars cross the top of Nob Hill, a great vantage point for the entire city, and the two lines that originate on Market Street in the heart of downtown San Francisco will take you to Ghirardelli Square e Fisherman's Wharf.

The rides cost $ 7 per person, but there are several passes which you can use, valid for one day, for three days or for a week and provide unlimited rides on trains, city buses and cable cars.

Those who want to know more can visit the Cable Car Museum. This little one free museum offers a behind-the-scenes look at how SF's famous cable cars work. 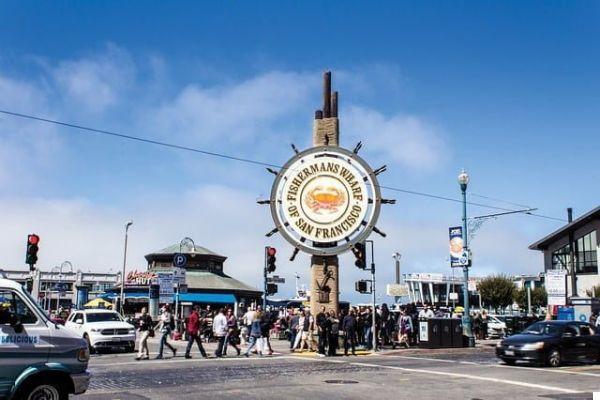 Fisherman's Wharf is one of the most popular and touristic places in San Francisco. It includes a wide stretch of waterfront full of shops, a wax museum, seafood restaurants and lots of street performers performing.

This pier offers great views of the San Francisco Bay and on Golden Gate, lots of fun and good food. Boat tours and ferries to Alcatraz also depart from here.


It is also free and easy to reach. In fact, Fisherman's Wharf is quite close to the center and can be reached on foot without any problems. Take the opportunity to see Pier 39 and Ghirardelli Square, nearby.

Centered on Columbus Avenue, this is a great part of the city for strolling. City Lights Book Store, the most famous bookstore in the city, is located in North Beach.

E Coit Tower, one of San Francisco's most famous landmarks, is a short but steep climb up Telegraph Hill. It was built in 1933 in an attempt to beautify the city. The inside of the tower was covered in murals, while the outside was left unpainted. 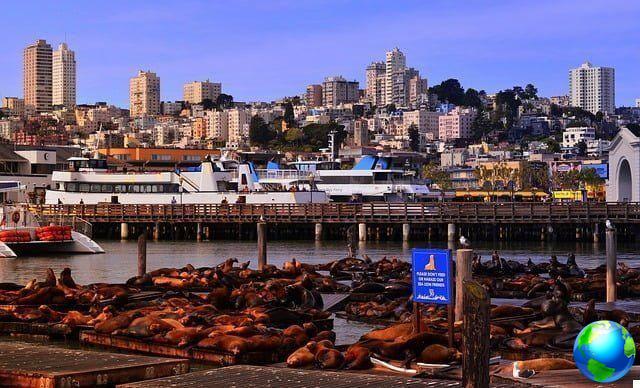 PIER 39 is located in San Francisco's Fisherman's Wharf, Beach Street and The Embarcadero. Parking is conveniently available in the PIER 39 Garage located directly in front of the entrance.

Often referred to as the "crookedest" road in the world, this Russian Hill scenic drive features sharp curves, fragrant gardens and stunning views of the bay, Alcatraz and Coit Tower. Discover Lombard Street.

You may have been to Chinatown in other cities, but San Francisco's Chinatown is another realm. It is the largest Chinatown outside of Asia and the oldest of its kind in North America.

Almost completely destroyed in the 1906 earthquake, Chinatown was rebuilt entirely in the Chinese style and soon became even more attractive than before the disaster.

Now with its temples, theaters, workshops, small businesses, shops, antique and souvenir shops, tea rooms and traditional pharmacies, Chinatown has become one of the best attractions to see in San Francisco. Chinese New Year celebrations are often considered to be the best in North America. 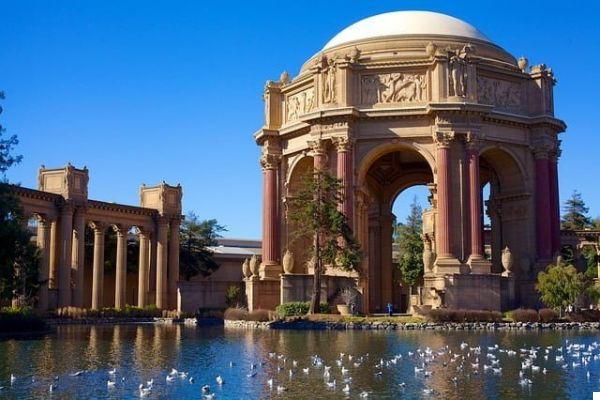 Formerly a military post, the Presidio is now a national park and recreational paradise with spectacular views, stunning trails, and historical and architectural treasures. Visit it for a stroll, a walking tour, a picnic, or to see an exhibition at the Walt Disney Family Museum.

Here you can also visit Baker beach. While San Francisco isn't known for being a beach town, its Baker Beach is often considered one of the best in California.

Located in the northwestern area of ​​San Francisco, in Garrison, Baker Beach is primarily known for its sweeping views of the Golden Gate Bridge and the nearby Marin Headlands.

The 1-mile-long beach offers visitors great views for taking pictures of the bridge, but is not suitable for swimming as it is dangerous due to the large waves, undertow and currents.

For all food lovers, this delightful attraction must be at the top of the must-see list in San Francisco. The Ferry Building Marketplace is a public food market that offers a variety of food stalls that serve as small restaurants, eateries, and grocery stores. Here you can find everything.

You can reach the market via the station Embarcadero BART / Muni and several public bus lines. Parking is also available near the market. The market is open every day from 10am to 00pm with slightly different hours on weekends.

Mission District is the oldest neighborhood in San Francisco, where the Franciscans founded the Dolores mission, who later gave birth to the city. This area is very cosmopolitan, lively and animated.

Allow yourself half a day to visit the neighborhood and enjoy its atmosphere. The facade of the old church (dating from 1791) can be seen from Dolores Street, next to the newer basilica (1913). The visit of the interior, the cemetery and the gardens are paid.

The neighborhood is also famous for its colorful murals. Besides you can also visit Mission Dolores Park, ideal for picnics or for a moment of relaxation! From this park you will have a great view of the city.

If you want to explore San Francisco's rich gay culture, the neighborhood of Castro it is its beating heart. Visitors find the Castro a relaxed, fun, and most importantly colorful neighborhood, with friendly residents, abundant amenities, and a striking aesthetic.

Located a couple of blocks north of Market Street and southwest of the city's financial district, Union Square is in the heart of downtown San Francisco's hustle and bustle. This area is loved by travelers and locals alike for its fantastic location and incredible energy.

Union Square Park is lined with tall buildings (some of which are adorned with Time Square format ads) and busy streets, giving people the unique opportunity to sit in the middle of a busy city and soak up the atmosphere without the risk of being invested.

The square also serves as a park, equipped with small grassy areas and palm trees. There are also several seating areas and works of art scattered around the square. The most famous are the high Dewey monument, located in the center of the square, and the sculpture of Hearts of San Francisco, found at the base of the square. 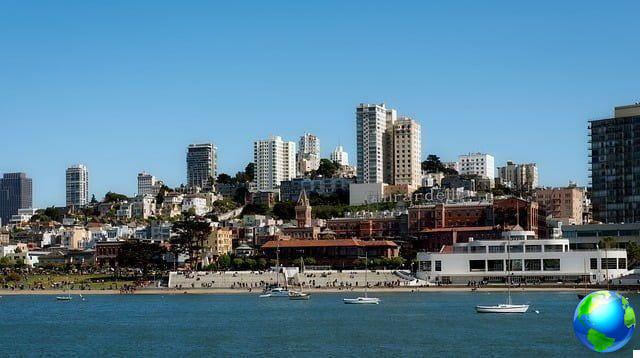 It is located in a restored industrial area, surrounded by shops, galleries and restaurants in refurbished industrial buildings. The square was inaugurated in 1964 and was the first in a series of projects designed to give new life to abandoned industrial complexes.

Ghirardelli's old red brick chocolate factory has been transformed into a center for shopping and art lovers. Its bell tower (built in 1916) is modeled on that of the Château de Blois in France. Later additions are rose gardens decorated with fountains and terraces with beautiful views.

If you want to enjoy the best views of San Francisco you have to make your way to the Twin Peaks. These famous hills are the second highest point in the city (after Mount Davidson). From the air you can see numerous San Francisco landmarks, including the Bay Bridge and downtown skyscrapers.

The views from here are breathtaking and definitely worth a visit. But be sure to bring a jacket as it can be windy.

Twin Peaks are open from 5am to midnight and there is free (albeit limited) parking at the top of the Twin Peaks Boulevard. The station of Castro Street is the closest metro stop Muni.

What to see in San Francisco - Tips

The price of tourist attractions in San Francisco is quite high, so the total bill can quickly get steep. In this case, if you plan to visit different attractions and museums, it is really worth comparing the ticket prices with the cost of the City Pass and the Go Card.

The City Pass provides access to several museums, the San Francisco Aquarium and the Monterey Aquatic Center, as well as access to cable cars. At $ 94 per adult, the price seems expensive on the spot, but the card is quickly profitable if you use all of the items.

The Go San Francisco Card gives you access to a few more attractions than the City Pass, but is valid for a period of 1 to 5 days depending on the package chosen.

Accommodation is the other item that can have a big impact on your budget when staying in San Francisco. Most hotels are quite expensive and often don't even include parking which is essential if you are traveling with a rental car.

What to see and do in Times Square, the heart of Manhattan and New York ❯

add a comment of What to see in San Francisco: the attractions not to be missed