Tour from Miami to Orlando of 2, 3, 4 or 5 days to visit the most incredible theme parks

Do you want to visit the most sensational attractions and amusement parks in the world? If the answer is yes, then it is necessary plan and organize a trip to Florida to visit Orlando's great theme parks.

Miami it is certainly the "gateway" for the many Spaniards who want to visit not only the city, but also the state of Florida. But it is not the only tourist destination in the state, one of the main and most visited destinations in Florida, along with Miami, it is right Orlando.

Ma how to visit and reach Orlando if you arrive by plane in Miami? The best solution is to rent a car and spend at least a couple of days of vacation in the most fun area in the world, where the great Disney theme parks, The Universal Studios, of SeaWorld and many other attractions.

Orlando and its environs host beyond 20 large theme parks, plus many attractions, which led the city to receive the title of the world capital of amusement parks. And in fact this title is fully deserving, being the funniest area on the planet.

How to organize a tour from Miami to Orlando

The few tours that currently can be purchased online, depart from Miami and include, in addition to the trip, the visit of the various theme parks in Orlando, but they have very high prices.

It is therefore advisable to organize a do-it-yourself tour, individually booking the various necessary services and tickets, such as car rental, hotels and entrance tickets to the parks.

Check availability and rates for car rental from Miami

How much is the tour

The cost of a tour from Miami to Orlando varies and depends on the number of days, the parks you want to visit and the type of hotel and rental car you choose. Anyway, to get an idea we show you some average prices based on the types of services chosen.

* rates may be cheaper as the rental period increases

Rates per accommodation per night

Where to sleep in Orlando: the best areas and hotels to visit the parks

Cost of tickets for the parks

To save and use the days of the holiday to the fullest, it is advisable to buy the ticket Park Hopper which allow the visit of several parks on the same day.

How many days do you need?

The choice of how many days to dedicate to visiting Orlando and its parks it is variable, and in principle it depends on the duration of the trip to Florida. For example, for a classic week-long Florida vacation, you can spend 3 days in Miami and 4 days in Orlando, or vice versa.

1 day tour from Miami to Orlando are not recommended because the distance between the 2 cities is almost 400 km, so it would be necessary to do 800 km in one day. Consequently, it would be too tired and a visit to any park would not be exciting.

The shorter tour or minimum travel period is 2 days, although it is advisable to spend at least 3-4 days in Orlando, in order to at least see the main parks or if you want to visit the extraordinary Kennedy Space Center.

If you only have 2 days to visit Orlando, don't worry you will still be able to spend 2 unforgettable days and take home beautiful memories. Which parks to visit in 2 days?

With 3 days available you can choose to dedicate all 3 days to the Orlando theme parks, or to spend 2 days in the Orlando parks and one for visiting the extraordinary Kennedy Space Center.

Also in this case, especially if you choose the second option, it is advisable to buy tickets that allow you to visit the various Disney parks or those of Universal Studios on the same day.

If you have 4 or 5 days available, you can also aim to see not only the Disney and Universal Studios parks, but also those of SeaWorld or if you prefer the various attractions in the city. With this tour duration it is easier to visit the main parks and enter the visit to the Kennedy Space Center.

The choice of Park Hopper Tickets, which allow you to visit multiple parks on the same day, is always the best choice, so you can visit at least the main parks in a few days.

Vacation of 6, 7 or more days in Orlando

We have indicated holidays instead of tours, for periods of 6 or more days, because in this case the duration is that of a classic holiday, and in this case those who aim the entire trip to visit Orlando, perhaps even by flight, can also fall. towards the city airport.

The lucky ones who will be able to spend a week or more in the world capital of amusement parks, will be able to dedicate even a single day to visit each park, especially if they are preferred, so as not to miss the main attractions and shows.

Which parks and attractions to visit in Orlando

with over 20 amusement parks and over 50 attractions deciding what to visit is not easy, especially if you have a few days available.

For short tours of Orlando (2 to 5 days) we recommend point to the main parks. The entrance ticket costs a little more, but the experiences that can be done inside the parks are unique and unforgettable.

Disney's Magic Kingdom - it is the main amusement park of Walt Disney World and is a theme park with many attractions for children and adults, in short, suitable for the whole family.

Universal Island of Adventure - considered the best amusement park on the planet, it is divided into various themed islands.

Epcot - the first part of the park has technological innovations as its theme, while the second part deals with international culture and one of the most beautiful shows ever takes place in the evening.

SeaWorld Orlando - theme park on the marine world and its inhabitants. All attractions and shows are suitable for the whole family.

Discovery Cove - wildlife park with experiences of contact with animals.

Gatorland - wildlife park on alligators, snakes and reptiles in general, with various attractions and shows.

Animal Kingdom - wildlife park with attractions and shows related to the animated world of Disney.

What attractions and parks to visit around Orlando

How to get to Orlando from Spain and US cities 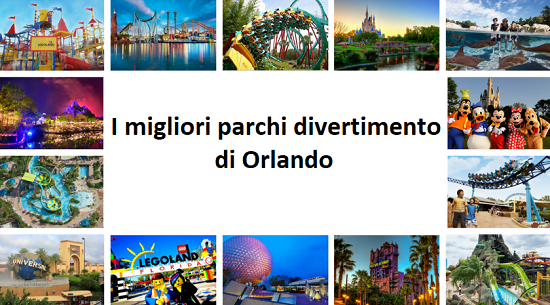 Tour from Miami to Orlando of 2, 3, 4 or 5 days to visit the most incredible theme parks
East Coast Tour: Must-See Places ❯

add a comment of Tour from Miami to Orlando of 2, 3, 4 or 5 days to visit the most incredible theme parks