Moving to Valencia, as Aurora explains it to us 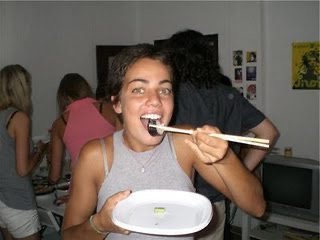 Aurora, when were you in Valencia?
I was in Valencia for two months: from 1st July to 30th August 2008

Through which association or project?
The trip to Spain was organized entirely by me with suggestions from relatives, friends and with the total help of the internet and telephone.

How did you find a home?
So, I state that finding a house in Valencia is not a problem .. obviously it depends on the period in which you go, in any case near the universities and in the places most frequented by young people there are the walls covered with ads of apartments and rooms ... even if not at the levels of Bologna. I found a home by pure luck and chance. Arrived in Valencia after having placed my bags in Collegi Major Luis Vives (in which I had reserved a room while waiting to find an apartment) I immediately went to the house of some girls I met the previous year, there I discovered that the The girls' house had been put up for sale, but as I went away I realized that a boy was moving into the apartment next door, or rather next door, so with my usual nerve I asked him if by chance he was vacating a room? Given the positive response the next day with the suitcase still to be unpacked, I moved to my new apartment.

Where was your home?
The house I was staying in was in Benimaclè district, that is the university area of ​​Valencia, a stone's throw from the Guardia Civil and next to the Vincent Zaragoza tram stop, areas in my opinion very characteristic and close to everything, then Benimaclè was many years ago a pueblo near Valencia which over the years is been incorporated into the ever-growing city. For this reason it is nice to notice the difference in the streets, buildings and shops between the center of the old pueblo and the center of Valencia.

Why did you go to Spain?
Mainly because I wanted to improve my Spanish, (which I did with a positive result at the Center d'idiomes) then to do an experience abroad alone, starting from a nearby destination and also because I admit that I fell in love with Valencia since the first time I visited it, in 2007.

What work did you do in Valencia?
Those who intend to work in Valencia must obtain these documents for employment: first of all the Social security and then of No which would be the foreign identification number, you have to do these documents in an establishment that is called Comisaria De Policia (about twenty minutes from the center of Valencia by metro, in an unpleasant area) it is better to do the documents even before looking for a job because it takes 11 to 15 days to get them, after paying a small fee of 8 € in any bank. I found a job in an Italian restaurant in the center and obviously tables always full of people (in Spain there is generally no difference between barista and waitress, if they hire you you have to be ready to do both things at the same time)

What were the wages like?
Being an Italian restaurant, the wages were higher than any other typical Spanish restaurant which, as far as I was able to ascertain, does not exceed € 5 per hour (little)

The hardest thing abroad?
The greatest difficulty in Spain as in any other location is the bureaucracy, a thousand cards to do anything, which in the end are nuisances but still useful because they benefit and protect the worker or the student.


The easiest thing?
Well speaking of Spain I would say there'integration, if you are not really an antisocial person and always on your own, meeting people is the simplest thing there is, since the Spanish people are known as welcoming and warm party-goers (characteristics that I generally confirm).

A city festival to recommend?
So, even if I haven't been there yet but I hope to go there soon I would say The Fallas, a religious festival that takes place in mid-March. 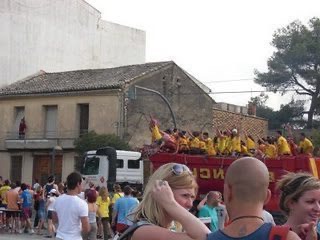 A party I've been to that I don't know if I would recommend to everyone is there Tomatina in Bunol. A town near Valencia. The party consists of a very lively tomato fight. Basically the streets of bunol are very small and the trucks carrying the tomato sauce are very large. Adding the people there to the small streets and the trucks it is certainly a dangerous party. Then you have to take into account that as soon as you arrive in Bunol you can buy clothes and then go home (since those you leave with are to be thrown away) and glasses of sangria for very little. Result: people who have really drunk a lot and no longer understand anything. In short, it is a once in a lifetime experience.


Typical dish to recommend?
I may seem trivial but certainly there Paella, whether it is fish meat or both together, very good, by the way I recommend a place in a small hidden square in the center of Valencia that makes excellent paella, also this time to be done only once in a lifetime which is called El Rall, run by a curious all tattooed woman.

A typical place to recommend where you have been?
Obviously I propose another very special restaurant called Bar Toni right in front of the Vincent Zaragoza stop, run by extra large Japanese, which offers exquisite dishes of Japanese mixed Spanish cuisine, in first place the Pato of the house in sweet and sour sauce. 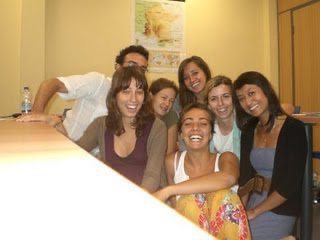 Something cheap in Valencia?
I would say almost everything, apart from the meat, which is not that great and expensive.

A positive thing about the experience?
Realize that you can survive on your own without the parents every three for two are there to solve your problems or tell you what is best to do, if you make a mistake you do it with your hands and your head. Another positive thing is the comparison you have with people who are not from your own country who see certain things differently from you and live differently from yours. From the disadvantaged Venezuelan to the typical affluent and somewhat spoiled German.

A bad thing?
That the experience lasted too short.

Would you recommend the experience to a friend?
Sure. I would recommend it to a lot of people.

Audio Video Moving to Valencia, as Aurora explains it to us
Tokyo: five tips for low cost eating ❯

What to see on Teide: trekking, cable car and excursions (with map)

Cuenca, the hanging houses in Spain

A day in Toledo, 5 things to see

add a comment from Moving to Valencia, as Aurora explains it to us