Unusual Barcelona: 10 places not to be missed

Barcelona is undoubtedly one of the cities I know best in the world. I was there for the first time over 20 years ago with my parents and I have been going back at least once a year for 13 years now. Despite this, I never felt like writing a “classic” article about Barcelona, ​​about the monuments not to be missed, etc. (even if you often ask me and maybe I should think again ahaha). On the other hand, in recent years, every time I have been there I have decided to devote myself to Unusual and alternative Barcelona, to lesser known places that are often not mentioned even in the most detailed guides. I have selected 10 and I hope they will make you curious and you will want to go and discover them .. of course after having seen the must-haves such as the Sagrada Familia, Parc Guell, etc. etc.

Unusual and alternative Barcelona: what to see

I bunker del Carmel they are located on a hill behind the call center Turó de la Rovira, in the Carmel neighborhood. These bunkers were built during the Spanish Civil War and used as an anti-aircraft battery to defend the city from bombing by the Francoist army. Even today you can see the remains of these bunkers and inside there is a small 'museum' that tells the story. But the beauty of this place is given by the 360 ° view of Barcelona that you enjoy when you get to the top. After being practically abandoned, in recent years the Carmel bunkers have become 'famous' among the people of Barcelona and tourists who come here, perhaps with a beer in hand, to enjoy the sunset. 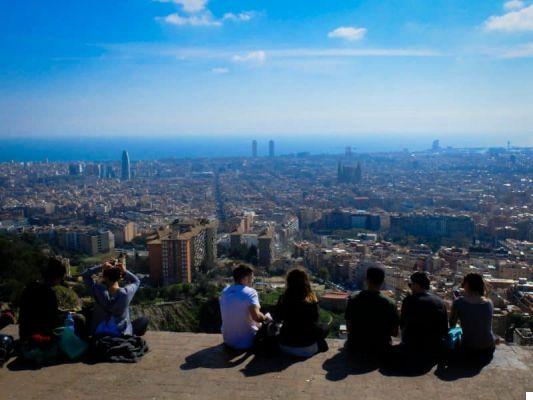 This is a real treat, especially for nerds like myself. This is the Most powerful Supercomputational Center in Spain and is found no less in a deconsecrated church inside the Research Center of the Polytechnic, in the Pedralbes area. The latest "version" of the supercomputer was installed in collaboration with IBM in June 2017 and is called Marenostrum 4; 160000 processors reaching a maximum power of 13.7 Petaflops. 500 researchers work there, from both Spain and other countries of the world, for applications that concern the most varied fields: genomics, meteorology, proteinomics, geophysics, climate change, big data, astrophysics, geology, etc. A curiosity: the final scene of Dan Brown's latest novel “Origin” takes place right here!

Free visit by reservation through this site 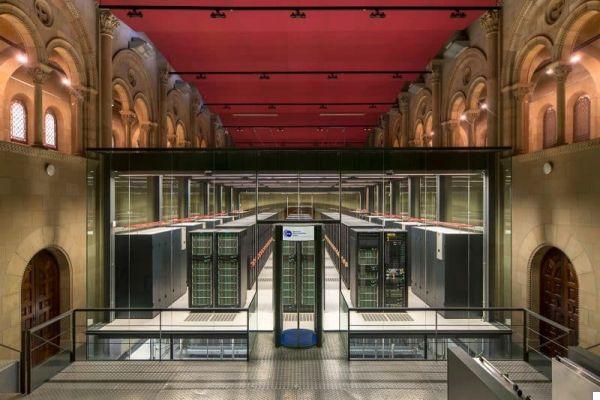 Made towards the end of the 700th century, the oldest garden in Barcelona it was commissioned by the Marquis d'Affaras i de Llupìa to the Italian architect Domenico Bagutti who designed the garden. Located in the Horta neighborhood, the park is in a somewhat peripheral area of ​​the city and remained privately owned until the 70s, when it was first opened to the public. The gardens are named after the labyrinth found in the center of the park, but the garden also has an artificial pond, waterfalls, a neoclassical pavilion and a mock cemetery. The maze with dense rows of cypresses will give you a hard time! A curiosity: in the labyrinth some scenes of the film “Perfume-Story of a murderer” based on the novel by Suskind were shot. 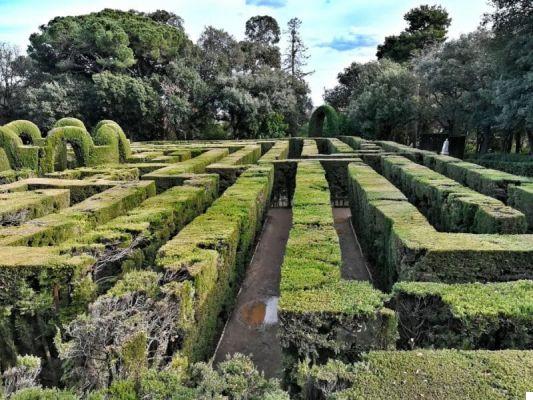 This for me it is one of the most beautiful places in Barcelona and literally left me speechless. The so-called Modernist enclosure of San Pau is a jewel of modernist architecture designed by Lluis Domenech i Montaner (the same one who designed the magnificent Palacio de la Musica Catalana). Built between 1902 and 1930, it was the headquarters of the Hospital de la Santa Creu i San Pau from 1916 to 2009, when all patients were transferred to the new pavilions and the complex was completely renovated to become a museum / center of disclosure. At the time of its construction it was a milestone in the architecture of hospital infrastructure: an open space with 16 pavilions communicating through a network of tunnels and surrounded by gardens, in order to cheer up patients. The complex has been declared UNESCO World Heritage Site in 1997. Currently 8 pavilions can be visited and, thanks to the reconstructions, it is possible to see how the various departments, the operating room, etc. were and how they worked. Absolutely not to be missed !! 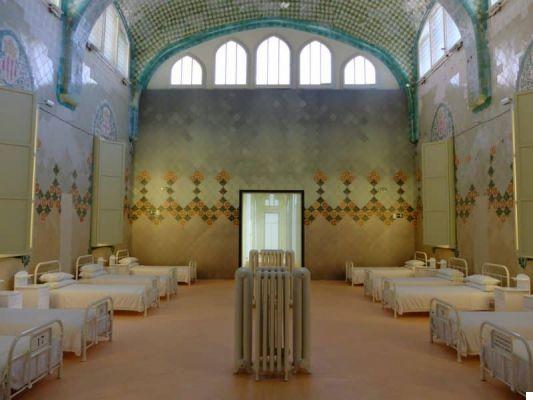 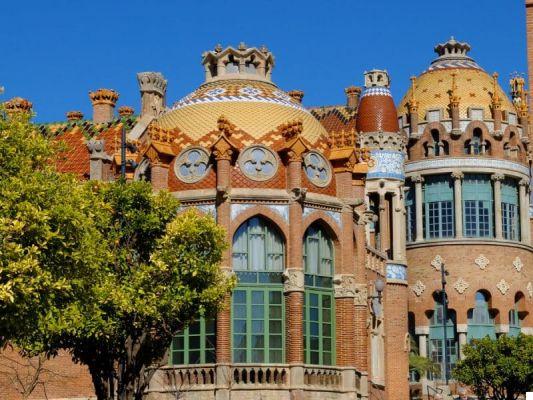 5. Street art and modern architecture in Poblenou and Diagonal

As is happening in almost all cities, even in Barcelona some old industrial districts are slowly turning into areas with hi-tech offices, boutique hotels, apartments and trendy restaurants. The most striking case is certainly New town that, within a few years, it has become the most hipster and hype neighborhood in Barcelona with rents that are skyrocketing. At the moment it is a mix of refurbished wharehouses converted into offices and art galleries and decadent buildings / warehouses waiting to understand their destiny; the whole is embellished with murals and works of street art in continuous evolution. For now, most of the works are in the area around the Poblenou Center Park, its Carrer de la Selva del Mare in the streets around the Llacuna metro stop (which is also the coolest area of ​​Poblenou, where you can find the best restaurants and clubs), but it is an ever-changing process. While you're there, head north to see the old and new contemporary architecture projects on Avinguda Diagonal, such as the famous Agbar Tower designed by Jean Nouvel. 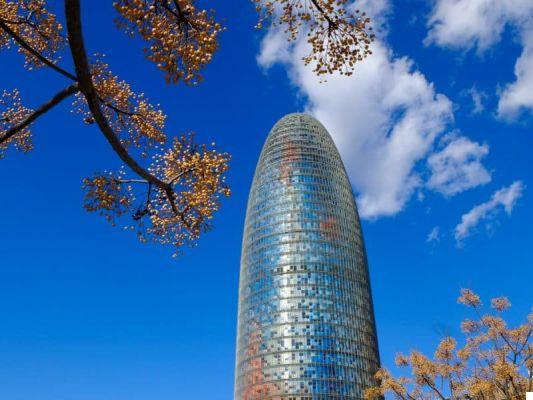 Il Tibidabo is the highest peak of the Collserola mountain range (512 meters) which lies behind Barcelona and is also one of the neighborhoods of Barcelona 'good'. The whole "high area" (as it is called) is scattered with beautiful buildings and villas from the beginning of the century, as well as modern exclusive buildings. But the main reason why the people of Barcelona and tourists go up to Tibidabo is the famous amusement park, one of the oldest amusement parks in Europe (dates back to 1899!), as well as for the magnificent view that you can enjoy. The two means of transport to get to Tibidabo are themselves an attraction: the blue tram (blue) and the funicolare. Both are almost a century old: inaugurated on October 29, 1901, they are still the ideal way to reach the amusement park today. One of the most unique amusements of the amusement park is the airplane, dated 1928, which represents a faithful reproduction of the model that made the first trip between Barcelona and Madrid, without forgetting of course the Giradabo, the large Ferris wheel of twenty meters in diameter.

Opening hours and ticket prices can be found at this link 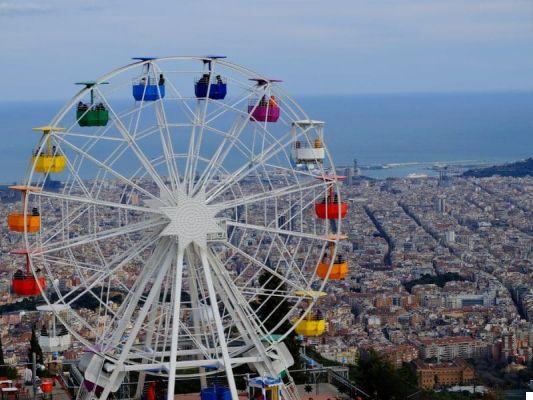 7.Real Academy of Medicine of Catalonia

This building is part of the complex which also includes the ancient one Hospital of the Holy Cross (see point 4) and the Convalescence House, in the historic center. It is a set of buildings that constitutes what for more than five centuries, from the fifteenth to the twentieth, was the health center of Barcelona and is a beautiful example of neoclassicism. The Real Academia de Medicina de Catalunya is located behind the Mercato de la Bouqueria, a few steps from the Rambla, in the building that was originally the Royal College of Surgery of Barcelona (1760- 1843) and then housed the Facultad de Medicina (from 1843 to 1906). The anatomical amphitheater, which can be visited with a guided tour, is the most emblematic and singular space of the entire academy. During the visit you will also hear the stories of famous doctors such as Santiago Ramón y Cajal and Miguel de Servet. (to many they will not say anything, but for someone with a neuroscientist background like me ... they are real sacred monsters). Since 1929 this building has been dedicated to training surgeons for the army.

Royal Academy of Medicine of Catalonia

To book the visit go to this site 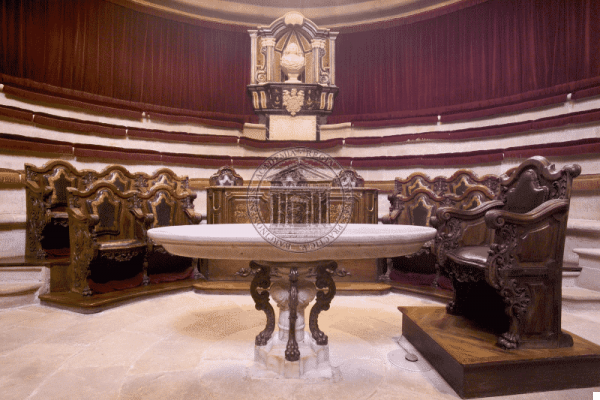 Il Refuge 307 (or Refugio 307), is only the 307th of the more than 1000 refuges that were built and excavated in Barcelona during the Spanish Civil War to protect the population from bombing. At the beginning of the war cellars and metro stations were used, but as the bombing intensified these shelters were built. Refuge 307 was built at surface level taking advantage of the terrain at the foot of the Montjuic hill, in district of Poble Sec. Today you can visit the tunnels, which have a height of just over 2 meters and a width of 1,5 meters, and as you proceed you can also visit the bathrooms, the water fountain, the children's room and the fireplace. , just some of the "facilities" that were there to ensure that people could resist better inside the shelter. The Refuge is part of the Barcelona History Museum (MUHBA).

To book write to: [email protected] Guided tours in Spanish, Catalan and English 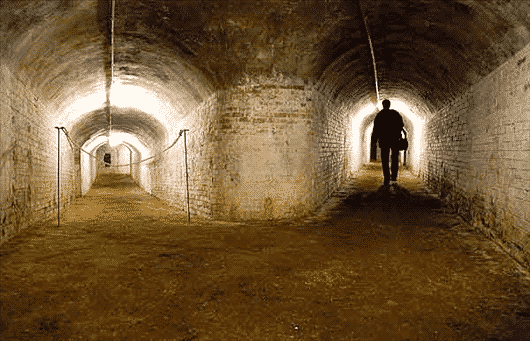 Among the places of unusual Barcelona to visit, he could not be missing, one of the strangest and most disturbing museums in the city. If you are passionate about hearses from the mid-nineteenth and mid-twentieth centuries (complete with mannequins in period costume) but this museum is absolutely for you. Here you can admire the splendor with which some were preparing to make their last journey on this earth. Hearts range from luxurious horse-drawn carriages to some motor-driven variants. The funeral home that runs it claims it is the largest of its kind in the world.

La Ciutadella it is the first public park designed in Barcelona (at the end of the 800th century) and was conceived as a large monumental garden of English and French inspiration, with a large lake and an imposing waterfall. To ensure water for these infrastructures, a large building was built just outside the park and out of sight of visitors water storage. Today this deposit has been converted and houses the beautiful Library of the Universitat Pomepeu Fabra which can be visited freely during the opening hours for students. The building also had a huge "swimming pool" on the roof but at the moment it is empty and no longer accessible to the public .. too bad!

For opening hours go to this link 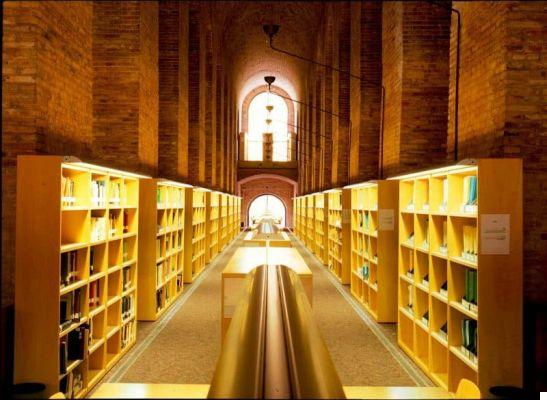 Unusual Berlin: 10 beautiful places not to be missed ❯

add a comment of Unusual Barcelona: 10 places not to be missed