Manhattan is the business district of New York which is home to many large corporations, the United Nations, as well as numerous prestigious universities and many cultural attractions. Manhattan it is by far the most densely populated district in the state, as well as in the whole of the United States. The borough of Manhattan can be divided into 11 major boroughs. Each of these Manhattan neighborhoods has its particularities, its history, its culture, its monuments. Later we try to get to know Lower Manhattan.

Located at the southern end of the island of Manhattan, Lower Manhattan o "Downtown" is primarily a business district, although it has a small number of good restaurants and bistros. It borders 14th Street to the north, the Hudson River to the west, the East River to the east, and New York Harbor to the south, Lower Manhattan is the fourth largest business district in the United States. To see in Lower Manhattan: Battery Park, the financial district (including the New York Stock Exchange) and South Street Seaport. From the lower Manhattan docks, you can also take a ferry to Staten Island and the Statue of Liberty.

Lower Manhattan has 30.000 residents, but on a weekday, the population can reach the astronomical figure of 300.000 people, between employees with their offices in the neighborhood and tourists with cameras over their shoulder. The streets are particularly busy at lunchtime and expect to queue for a hot dog as well.

When night comes, the neighborhood is extremely quiet compared to the rest of the city. Although less crowded than Midtown, you will find numerous restaurants run by great chefs, such as: Nobu, Wofgang's Steakhouse and Bouley.


What to do or visit in Lower Manhattan?

There is a lot to see at Lower Manhattan: museums, gardens, department stores, historical monuments… tourist activities and excursions are extremely varied! Located in the southern tip of Manhattan, Lower Manhattan is a financial district with a very large number of buildings. On weekdays, the neighborhood is very busy during office hours. Merchants and businessmen abound on the streets.

La Statue of Liberty it is one of the most universal emblems of freedom and democracy. Gift of France to the United States, the Statue of Liberty celebrates the centenary of the American declaration of independence and symbolizes the friendship between the two nations. This monument depicts a woman wrapped in a toga with a torch in her right hand and tablets in her left hand, where it says in Roman numerals "July 4, 1776", American Independence Day. Now it is still possible to visit the inside of the statue and climb the 354 steps that lead to the statue's head and its crown.

Wall Street, the name of the street on which it is based the New York Stock Exchange. The main building of the New York Stock Exchange is located on the corner of Wall Street and Broad Street, with the facade facing Broad Street. This road is surprisingly small and narrow compared to the financial strength and influence of the world's leading stock market. One of the most famous symbols of Wall Street it is the statue of the "Charging Bull": a bronze of over 3400 kg that represents a bull that leans forward and head down as if it were ready to charge.

Lower Manhattan is also home to Battery Park , one of the oldest public spaces in New York City, also popular with New Yorkers and tourists. Battery Park it truly is the cradle of New York history and a place steeped in history: Dutch settlers arrived here in 1623. Each year this 10-hectare recreation area attracts over four million people, largely thanks to its main attraction, Castle Clinton National Monument.

Ellis Island it has been the main entry point for immigrants arriving in the United States for many years. About 12 million people, most of them Europeans, passed through Ellis Island between 1892 and 1939. Today Ellis Island it houses a museum that allows visitors to experience what millions of immigrants have experienced through videos, archives, photos, recordings, etc. 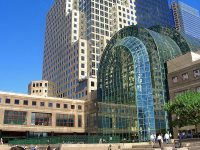 Il South street seaport it's a must in NYC. South Street Seaport not only offers spectacular views of the Brooklyn Bridge, East River, Lower Manhattan and the Statue of Liberty, but also bears witness to the city's rich maritime history. To visit: the South Street Seaport Museum, which traces the history of the port of New York and its commercial and cultural impact on the city, the state and the country. South street seaport it is also home to one of Manhattan's most popular shopping areas: Pier 17, which has more than 100 shops, cafes and restaurants, and the well-known Fulton Fish Market.

Visit the 11/XNUMX Memorial and Museum. The memorial, long known as ground zero, stands today on the former site of the Twin Towers. Two  basins built at the exact location of the two towers to pay homage to nearly 3000 victims of the attacks. Unlike the memorial, the 11/XNUMX museum visit is paid and its entrance is between the two basins of the memorial.

Cross the Brooklyn Bridge. On foot or by bike, don't miss this emblematic walk! The place allows you to enjoy a magnificent view on the Manhattan skyline. Suspended over the East River, the brooklyn bridge it is arranged on different levels and therefore allows both car traffic, at the lower level, and pedestrian and bicycle traffic, at the upper level.

Climb up to the observatory of One World Trade Center. One World Observatory is the brand new attraction that crowns One World Trade Center, the tallest building in the Western Hemisphere. Taking the Sky Pod elevator, you'll experience an immersive, full-speed story of NYC's 500-year span in less than 60 seconds. Afterwards you move on to the main 360-degree observation area of ​​the 100th floor, where on a clear day you can see for 50 miles beyond the iconic monuments, bridges and waterways of New York.

Enter the Trinity Church, a small church with an adjacent cemetery which contrasts completely with the surrounding architecture.

Where to sleep in Lower Mahattan

There are very few budget hotels in Lower Manhattan. Of course, right in the financial district, we find mainly large chains famous for business travel. More precisely, we find the following chains:

Eating in the United States: breakfast, lunch and dinner ❯

add a comment from Lower Manhattan in New York, an unmissable tourist stop