In Seville at Anna's, a holiday with friends 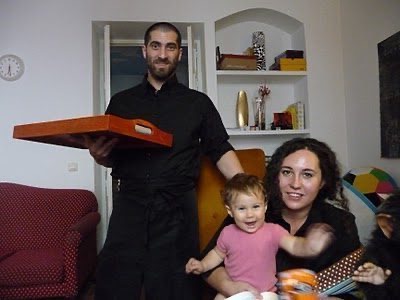 Anna has been living for years a Seville, after a period as a student in the Spanish city, today together with Luca and Luna he lives in one of the liveliest neighborhoods of Seville, in downtown area.

Anna what kind of city is Seville?
Seville is a cheap city, you can live with very little and with very few euros you can go out for dinner or have a beer in places of all kinds. It's a gay-friendly city, and this means that there is a sort of harmony between contradictions that do not make anyone raise the tone as there is a Live and let live which is the background to the various realities.
There is a very sporty coexistence even in the football derbies of the two local teams (Sevilla and Betis) unknown to us. We spent the first two years between a dinner and a party, often without even moving from the building where we live since the neighbors are all our age and we are now friends, so much so that when someone goes on vacation, they leave the remains of the fridge to those who remain, who maybe wet them in the meantime plants or receive mail.

Did you immediately settle in Seville and with the neighbors?
Yes, think that our summer holidays we have all spent guests by the neighbors who are the owners of a heavenly place in Caños de Meca called Pure Life and is true to his name.

And what are you doing in Seville today?
The first year in Seville saw us busy with survival and documents. Then I started a doctorate in gender issues on the history of women and Luca dedicated himself to the preparation of competitions for high school. 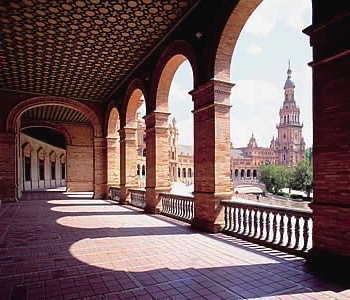 Which Italian city do you start from and what is your path?
Luca and I are both from the province of Venice, language graduates (English and Spanish), plus a master's to teach Italian to foreigners. We decided to leave 4 years ago now. We spent the first year of exile teaching in Peru, in Lima, in a private Italian school with a salary so interesting that it allowed us to accumulate a nest egg thanks to which, a week after returning home, we could calmly decide to take a one-way ticket to Seville, a city that I already knew for making you a Erasmus 13 years ago.

Then it arrived Luna and with her the new settling of the house, for which we decided to rent a room looking forward to better times, also because we have always enjoyed having visitors and sharing a piece of our Sevillian lives with others. Coming to us means staying in the house of friends who explain to you how to experience the city as we live it or we have lived it (we haven't been to the disco for a while, but we know where to go). There are several places where it is dance flamenco.


The best time to see Seville?
The best times to come to Seville are spring and autumn, although wintering here is not a bad idea (it's 23pm and the thermometer outside showed 20%).

The important high season here coincides with the month of April in which the two major events of the cities are concentrated The Holy Week just before easter, and two weeks after The fair a great flamenco festival in which an entire district of the city is used for celebrations that consist of great drinking and uninterrupted dances in typical costume. In those days hotel prices are skyrocketing and we raise the rate too, albeit not by much.

Audio Video In Seville at Anna's, a holiday with friends
Tour of flavors with Piacere Modena ❯

What to see on Teide: trekking, cable car and excursions (with map)

Cuenca, the hanging houses in Spain

A day in Toledo, 5 things to see

add a comment from In Seville at Anna's, a holiday with friends