Getting around in Miami: by subway, bus, train and car

It is essential to know how to get around Miami in order to better visit this beautiful tourist city in the south part of Florida and make the movements in the shortest possible time.

The city offers various means of transport, both public and private. So which transport to use for travel? Let's see in detail what they are and which ones are more convenient according to the needs. There are also ways to get around Miami for free.

It is not advisable to use a car to move around the city because finding parking is difficult and expensive.

Miami is the seventh largest city in the United States and has a good public transportation system. To get around the city, public transport is undoubtedly the best and cheapest option.

The most used public transport to move around Miami are: the Metrobus (the bus network), the Metrorail (a cross between the metro and the train) and the Metromover (a kind of free tram on rails).

Metrorail is a cross between metro and train. This elevated train connects the city from north to south, encompassing a total of 25 miles (40 km). It is a great transportation option for traveling long distances quickly and for getting around from Miami International Airport to the city center.

The Metrorail stops at major tourist attractions such as: Coconut, Vizcaya, Grove, Brickell and Downtown. In addition, the various stations are connected to the bus network to reach other destinations.

The Metrobus is the bus system of the city of Miami. It stretches from Miami Beach to downtown Miami (Downtown). And the main means of getting around the city, even if the times to cover long distances or with line changes can be long. The advantages are that you can reach all places in Miami, including the transfers between Miami and Miami Beach, moreover, the service is also operational in the night hours.

The service operates 24 hours a day, even at night

The Metromover is a system of automated tram to move around downtown Miami. The system consists of three loops (lines), covering 5 miles (approximately 8 km) and 21 stations.
Metromover serves the neighborhoods of Downtown Miami, Brickell, Park West and the Arts & Entertainment District. AND the cheapest way to get around in the center, since it is totally free.

The Citywide Free Trolley is a 'transport alternative reliable and integrates the existing transport network for getting around in Miami Beach. These are buses that look like railway carriages. The service is totally free and it is one of the best ways to get around this area of ​​the city.


There are 4 main routesi: Middle Beach Loop, North Beach Loop, Collins Express and South Beach Loop and the frequency varies from 15 minutes to 40 minutes, depending on the route. The service is suspended at night.

Tri-Rail is one railway line which connects Miami Airport and the city center to Fort Lauderdale and West Palm Beach.

Miami is a very large city, so the easiest and fastest way to get around is by private transport.

Getting around by taxi in Miami

Taxi service is quite expensive in Miami. The cost is an initial $ 3 plus $ 1 for every 4 miles (6 km). Although expensive, it is a comfortable way to get around and one of the most popular with tourists.

Car rental is the best option to move freely in Miami. Rental and fuel costs are much lower than in Spain. Anyway, it is It is not advisable to use the car to move around the city because finding parking is difficult and expensive.

Although little used in Spain, Uber is a widely used private mode of transport in the United States. To use it you need to download the application on mobile and the cost of transport is slightly lower than by taxi. 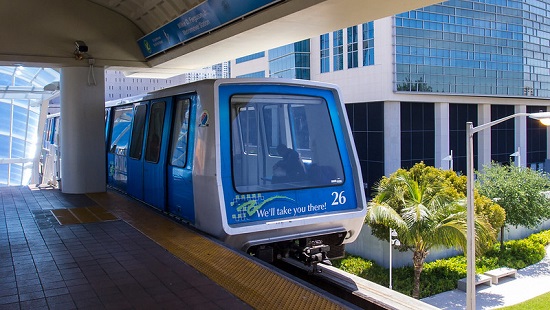 Miami Metromover –
Getting around in New York, the best means of transport ❯

add a comment of Getting around in Miami: by subway, bus, train and car