Build the Sagrada Familia in Barcelona 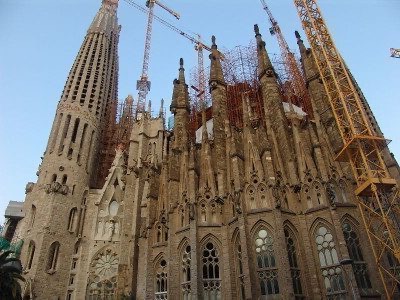 La Sagrada Familia di Barcelona it is considered the architect's masterpiece Antoni Gaudì. The immense work is located in the city of Barcelona where the works began around 1880.

The intent was to build an imposing church thanks to donations that were done. Even today the intent is that, even if the church has never been finished and is still being worked on with cranes and construction sites. With the entrance ticket, del cost of 13 €, € 11 if you are students or groups of at least 20 people, you can contribute to the construction of this wonderful work.

- times of visits are very wide and a tour up to its terraces is the best way to visit the imposing church. The opening hours are from October to March from 9 to 18, from April to September from 9 to 20. On 25 and 26 December and on 1 and 6 January from 9 to 14. You have no excuses in short;)

La my first time at the Sagrada Familia I went up to the tower at the top, the second one did not. I must honestly say that the first time the interior of the Sagrada was still a open-air construction site, without the visit to the tower, money would have been wasted. During the second visit instead, made inAugust of the 2012 the interior was completed and I only paid 13 € for the entrance against 16 € for the visit also to the tower. I only saw the finished interior, I haven't climbed up yet (I'll be back when this is completed too) and I have to say it was a great money spent. The interior is gorgeous!

Gaudi wanted to recreate the interior of one forest, without straight lines but wavy, because it said that in nature they do not exist straight lines. The nave is wonderful, the play of lights (in my opinion beautiful at sunset) makes this architectural and artistic masterpiece one of the beauties of Barcelona.


The Sagrada Familia is the first attraction visited annually in Spain with over 2 millions of visitors every year. Does this tell you anything? Personally I would pay again and again to see this show. Don't miss the museum under the Sagrada, with free admission, it proposes the photos and sketches of the genius Gaudì, the works and many small curiosities such as the explanation of the numbers found at the entrance to the ticket office.

The interior of the Sagrada Familia was finally completed, the church has been consecrated and forecasts are that it will finally be completed even out not earlier than 2030. In short, I will have time to go back a third time, and you, have you seen it?

Audio Video Build the Sagrada Familia in Barcelona
Alnwick Castle, here's how to get there ❯

add a comment of Build the Sagrada Familia in Barcelona