Discovering the region of central Italy through the history of its most loved and evocative castles. If you are a lover of the Middle Ages, legends and breathtaking landscapes, do not miss this tour in Abruzzo.

Do you remember Ladyhawke? 1985 film with Michelle Pfeiffer. Well, the film was shot in Abruzzo, al Rocca Calascio Castle.
Some rumors say that some scenes of Il Nome della Rosa were also shot inside and outside the castle walls. 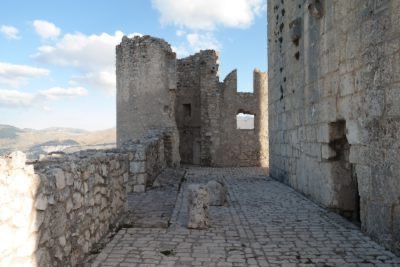 But it is not the only fortress to attract tourists and professionals to the evocative landscapes of the region of central Italy.

Follow me on this journey to the 5 most beautiful and visited castles in Abruzzo. We will start from the province of L'Aquila, the regional capital, and then move to the province of Chieti.

1. Rocca Calascio: one of the most evocative places in Abruzzo

Located in the heart of the Gran Sasso and Monti della Laga National Park, this castle is one of the most evocative places in Abruzzo. This is confirmed by National Geographic which has included Rocca Calascio among the fifteen most beautiful castles in the world.
Here were shot scenes from other films such as The Bride's Journey, a 1997 film by Sergio Rubini and The American, with George Clooney. 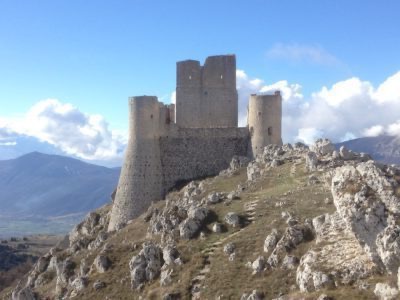 The castle, which dominates the Tirino valley and the Navelli plateau, it is located on a ridge at 1.460 meters high, a short distance from the plain of Campo Imperatore. In ancient times it was used as a military observation point due to its very favorable position.
The fortress dates back to 1140, the period of the Norman conquest in Italy. In 1703 it was devastated by a violent earthquake following which the area of ​​the ancient village was abandoned and the population moved to the nearby town of Calascio. 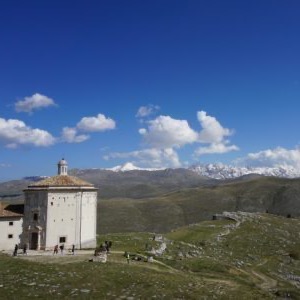 It is from Calascio that you arrive at the castle, along its suggestive streets. At the edges of the streets, small restaurants welcome the "pilgrims", who stop to taste typical dishes of Abruzzo.
On the path leading to the castle you will meet the Church of Santa Maria della Pietà, an octagonal temple built in 1596 and today the destination of many faithful.
Arrived at the foot of the castle, you can admire the vast landscape that is divided between the Campo Imperatore plateau and the Majella massif.

2. Piccolomini Castle in Capestrano: a symbol of Abruzzo

The Castle is located in the center of the town, in the province of L'Aquila. The building was built on the remains of a medieval fortification.
Dominated first by the Piccolomini family and then by the Medici, today it retains the coat of arms of the first, which maintained its dominion between the fifteenth and sixteenth centuries. 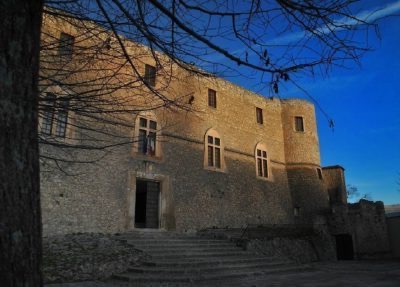 The floor plan of the structure is trapezoidal in shape with three towers at the corners. In the courtyard, in addition to a 400th century well, there are stairs that lead not only to the upper floors, but also allow a breathtaking view over the surrounding valley. 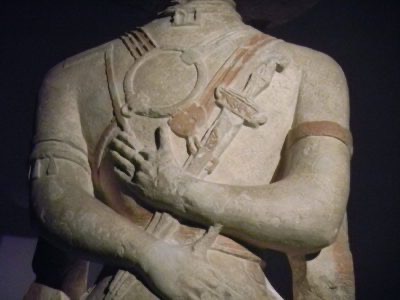 A reproduction of the Capestrano Warrior welcomes you in the atrium of the castle. This sculpture is one of the symbols of Abruzzo, found in 1934 by a local farmer while plowing the land of his countryside. The warrior, sculpted on a single block of limestone, represents the Piceni people.

Next to him was found the "lady of Capestrano", a stone bust depicting the warrior's wife or daughter. The dimensions of the sculpture are particular: 2,10 meters in height and 135 cm in width. Behind the reproduction of the warrior, remaining on the subject, you will find a military museum dedicated to the world wars.

Located at the entrance to the medieval village of Crecchio, the castle dominates the street below and welcomes visitors with its majesty. Its structure is quadrangular and surrounded by four towers at the corners.
Today in the Crecchio castle it is possible to visit the Archaeological Museum of Byzantine and Early Middle Ages Abruzzo, a reference point to reconstruct the history of the Byzantines in Abruzzo. 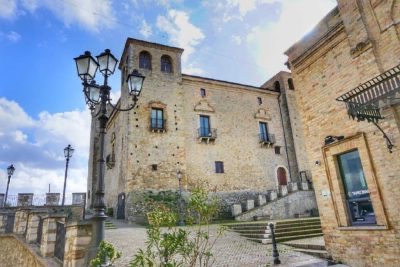 The Castle develops on the edge of the town of Ortona in the province of Chieti, in a suggestive position overlooking the sea: from here it dominates the whole town.
The construction, built on buildings of medieval origins, dates back to 1400 and is linked to the Aragonese domination of the Abruzzo region. 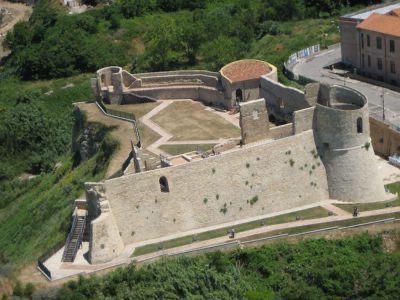 It originally had a trapezoidal plan and four cylindrical corner towers. Due to the landslide of 1946, the curtain wall in the part of the castle facing the sea has disappeared.
From the Castle the gaze covers a long stretch of Trabocchi coast, where the trabocchi are the ancient fishing machines, today mostly used as seaside restaurants.
Today the Aragonese Castle has become a place of culture for the town, as it hosts exhibitions, concerts and cultural events of all kinds, especially in the summer.

It stands on a rocky spur and from here dominates the medieval village below and the Sangro valley. According to history, the Lombards in 600 AD wanted the construction of Roccascalegna, during the occupation of Abruzzo and Molise. Thus the watchtower and the castle were built to defend against the Byzantine invasions. 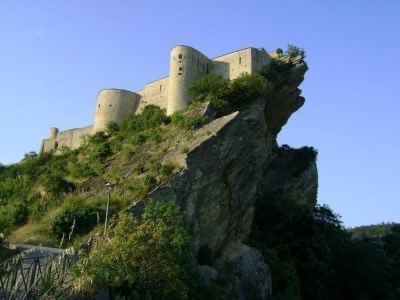 In addition to the historical and naturalistic interest, Roccascalegna Castle attracts attention also thanks to a legend that hovers within its walls.
It is said that in 1646 Baron Corvo De Corvis restored the "Jus Primae Noctis", a law dating back to the Middle Ages according to which every new bride of the Feud was forced to spend the first wedding night with him. This custom continued until a particularly jealous husband showed up at the baron's chamber disguising himself as a bride and stabbed him to death in his bed.

Today it is said that the Baron, before dying, placed a bloody hand on the entrance tower, leaving his mark. That footprint appears to have remained despite attempts to wash it off. 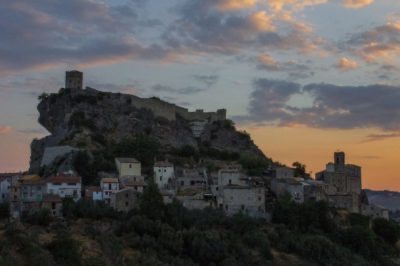 Let yourself be influenced only by the beauty of the castle and come and visit it, today it is home to very interesting cultural events and exhibitions and is open to guided tours.

This is my very personal list of 5 castles you absolutely must see in Abruzzo. There are many others but the important thing is to start.

add a comment of Abruzzo: the 5 castles to visit