On the sidewalks of these 2 streets there are more than 2.600 stars dedicated to personalities and celebrities linked to the world of cinema, theater, TV, music and radio.

The stars they have 5 points and in addition to bearing the name of the celebrity, they have a symbol that indicates the category for which the person has been granted the star.

The Hollywood Walk of Fame is not only one of the top attractions in Los Angeles, it also hosts and leads to major attractions such as the TCL Chinese Theater and Dolby Theater.

The TCL Chinese Theater is a popular theater, and currently a cinema, located at 6925 Hollywood Boulevard in Hollywood. The building resembles a huge Chinese pagoda and it is one of the most viewed locations in movies.

The importance of this theater in addition to its architectural beauty, lies in having in the square outside the building, the foot and hand footprints of many stars of the world of cinema such as: Clark Gable, Rita Hayworth, Anthony Quinn, Samuel L. Jackson, Sophia Loren, Marcello Mastroianni, Marilyn Monroe and Shirley Temple.

Recently, the footprints of the wands, hands and feet of Emma Watson, Daniel Radcliffe and Rupert Grint from the film festival have appeared on the square Harry Potter.

The Dolby Theater, once the Kodak Theater, has been made famous for being the place where it takes place since 2002 Oscar night, during which the famous golden statuettes are awarded.

For those looking for free attractions do not miss the Hollywood sign, the historic radio antennas and Griffith Park, including the astronomical observatory.

The best world to reach the Hollywood Walk of Fame is by car. If you have a GPS, your best bet is to find a parking space near Hollywood Boulevard and then walk along it.

If you want to arrive by public transport, the closest subway stops are Hollywood / Highland and Hollywood / Vine. The metro line that leads to these 2 stops is the Metro Red Line.

Hollywood is the best area in Los Angeles to sleep in. It is certainly the safest area in the city, but also the one that offers the most things to do and see. Many hotels have balconies and windows overlooking the Hollywood Hill where the famous sign stands. In addition, sleeping here allows you to not use the car and visit many of the city's attractions on foot.

If you want some advice you can read our guide on best hotels in Hollywood. 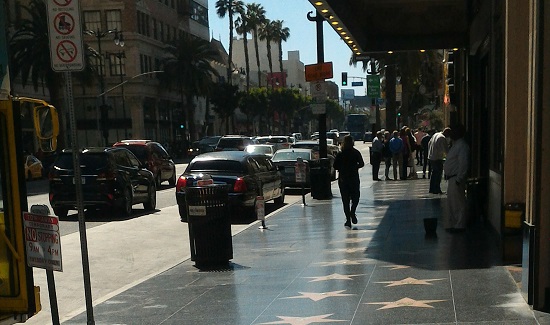 Hollywood Walk of Fame Los Angeles –
Hollywood Wax Museum in Los Angeles, one of the main attractions of the cinema-related district ❯