THEarchipelago of Hawaii it is made up of eighteen islands and atolls that stretch for over 2.400 kilometers. The black sand beaches, which attract thousands of tourists every year, owe their color to their volcanic origin, which is nothing more than the lava pulverized by time and erosion.

The "main islands”Are eight located in the extreme south-east. It is about Niihau, Kauai, Oahu, Molokai, Lanai, Kahoolawe, Maui, and the 'island of Hawaii, which is by far the largest, so it is often called the "Big Island". This name reflects the need to avoid ambiguity between “Hawaii”, ie the entire state (the set of islands), with that particular island.

They are one of the most beautiful destinations in the world for holidays and honeymoons. On each island you can breathe a unique tranquility, in fact they are excellent destinations for couples and newlyweds, who in addition to fun and relaxation, are looking for romantic situations.

Nicknamed The Big Island, the Island of Hawaii is the largest and gives its name to the entire archipelago. Greater than all the others put together. The island of Hawaii continues to expand its extent due to active volcanoes.

On the island there are two of the largest mountains in the world, the most active volcano on the planet, the Kilauea in the volcano park, as well as the resort town of Kona.

Known as "The Gathering Place" (the meeting place), the island of Oahu is the one with the largest population and the most developed. On the south coast is Honolulu, the commercial and government center of the state.

Waikiki Beach is one of the most popular surfing tourist destinations in the world. There are beautiful pineapple fields and amazing surfing beaches with very high waves

Maui is the second largest island, crowned by the imposing volcanic crater of Haleakala (3.055m). It is also known as the Isle of the Valley due to the narrow plain between Haleakala and the Maui Mountains.

To the west of the island are the resorts of Lahaina, Kaanapali, Kihei and Wailea. In the eastern part you reach the village of Hana, experiencing one of the most winding and beautiful roads in the world.

Kauai, or “The Garden Isle” is home to numerous natural wonders such as the Wailua River, Waimea Canyon and the Na Pali Coast. Mount Waialeale stands out as one of the places with the highest rainfall in the world.

Molokai, or “Friendly Island” has a lush rainforest and beautiful beaches. This is the best place to do ecotourism

Lanai was wholly owned by the Dole Foods company, which also established the largest pineapple plantation in the world; now it hosts several exclusive locations. Shipwreck Beach and Garden of the Gods, with red landscapes, similar in shape to the lunar surface, are two beautiful places to visit.

Niihau is a private island with a unique Hawaiian population. Tourist access to the island is limited to helicopters and hunting trips departing from Kauai.

Kahoolawe is now uninhabited even though attempts are being made to rehabilitate the island.

How to get to Hawaii

There are no direct flights from Spain. To reach the Hawaiian Islands there are likes to San Francisco and Los Angeles landing at Honolulu International Airport on Oahu or Maui.

Le cruise ships internationals arrive in the ports of Kahului, Honolulu, Nawiliwili, Hilo and Kona, the islands that have the major tourist attractions. 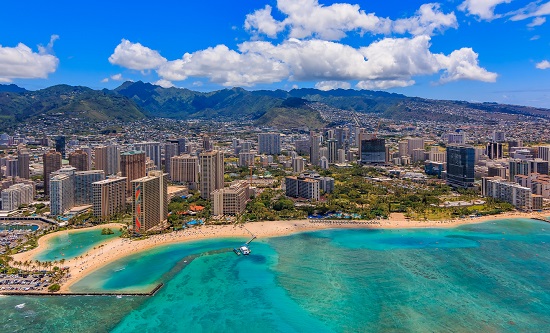 add a comment of Hawaii travel and vacation guide