Boston is a fascinating and very beautiful city, although many times off the circuits and tours of European travelers. The city of Boston can be defined as the historical and cultural cradle of the United States. Capital of the state of Massachusetts, as well as the main city of the New England area, it was founded by English colonists in the XNUMXth century and is one of the oldest cities on the American continent.

Boston was the stage of the American Revolution and the Civil War which ended with the abolition of slavery. It was also the first major port during the industrial era, and here the first university in the United States was born. This is a city steeped in history, where the old mixes with the modern. It is the American city that most closely resembles the style of European cities.

What to see in Boston

It's hard to talk about Boston without mentioning these two world-renowned universities. Located in the nearby city of Cambridge, they evoke above all the excellence of teaching and research, but also a particular student atmosphere and an almost mythical history.

Located in Cambridge, on the other side of the river, founded in 1636, Harvard is the oldest university in the United States. Known to all, Harvard holds the title of the most expensive university in the world. Access to its campus is free and students offer free tours.

Massachusetts Institute of Technology (MIT) is dedicated to science and technology. Founded in 1861, it is a world famous university, a symbol of excellence, with many Nobel laureates and world-class professors. Here, too, free tours are offered.

The Back Bay neighborhood was so named because it was built on what were once stagnant pools of water. Today, the late XNUMXth-century neighborhood is an elegant and hip place with quaint streets lined with Victorian homes, restaurants, and elegant boutiques. The neighborhood is also home to the Boston Public Garden, the oldest and largest botanical garden in the nation.

Do not miss Boston Public Library with its superb interior patio and the Trinity Church, a 19th century church, located next to the immense Hancock Tower, a skyscraper of 100 floors and 344 meters high.

The Freedom Trail is an absolute must when visiting Boston. America's first historical walking tour, the Freedom Trail is a trail that includes 16 of Boston's most important Revolutionary War sites. It largely tells the story of the American Revolution and all the events that the city has known.

Marked by a red paint line, the 2,5 mile (4 km) trail begins at Boston Common, the oldest park in the United States. Following it you can discover the most important monuments and buildings of the city, such as Massachusetts State House, cemeteries andOld state house, one of the oldest public buildings in the country. The end of the trail connects with the Harborwalk, which takes visitors to the USS Constitution.

It is a residential area located on a hill north of Boston Common and represents the most exclusive area of ​​the city. Magnificent red brick Victorian mansions are lined up side by side. At night hundreds of gas lanterns give the area a mystical, welcoming and romantic atmosphere.

This is a great area for a bike ride on the banks of the Charles River. Various concerts are held here during the summer, with the celebrations culminating on July 4th, with a great fireworks display.

Boston is known for its sports teams, including the Red Sox, the famous baseball team. The expansive Fenway-Kenmore area is home to the famous Fenway Park baseball stadium. Going to the stadium and watching a match can be a great new experience. The streets around the stadium become very lively on sporting evenings.

Boston is a port city and its was also the first port in the United States. Even today it is one of the largest on the east coast of the United States. This is where the boat tours depart to visit the various islands or to admire the whales.

Located on the waterfront, it is made up of 3 levels and contains no less than 22.000 marine animals of all sizes, shapes and colors. What impresses most is thehuge cylindrical tank of 760.000 liters of salt water that simulates a Caribbean coral reef and is located in the middle of the building. Hosts sea ​​turtles but also sharks, races, barracuda… And everything that lives near coral reefs.

Docked at Pier 1 on Harborwalk, the USS Constitution, known as the "Old Ironsides“, Is the oldest ship in the world still floating, and still sails every Fourth of July to commemorate America's independence. Launched in 1797, this three-masted frigate was christened by President George Washington in homage to the United States Constitution. The ship is open to the public all year round with free tours provided by US Navy personnel.

This historic 20-hectare space served during colonial times as a place to graze cattle. Established as a park in 1634, it is the oldest public park in America. History buffs can explore its various monuments. A kiosk offers visitors information on the park's monuments. Landscaped with shady trees, fountains, and a pond, Boston Common is a pleasant place to take a break.

Often mystified, the famous Salem witch episode rocked the region in the seventeenth century. In 1692, Salem is a small, quiet coastal town, but everything suddenly changes when hundreds of people are accused of witchcraft and twenty of them are sentenced to death following unlikely causes.

The city takes the opportunity to make tourists relive this unique and dark history, through several highly interactive museums such as the Witch Salem Museum Witch House or Witch Dungeon Museum.

A peninsula that sinks into the Atlantic Ocean, Cape Cod is one of those natural places that amaze travelers with its huge sandy beaches, picturesque harbors, small towns with unique charm, lighthouses overlooking the wild coast ...

On the east coast of Cape Cod, the "Cape Cod National Seashore”Is the wildest protected natural area. It is a large park that collects dunes, moors, cliffs and ponds. A unique natural ecosystem that can be discovered on foot or by bicycle along the large cycle path that crosses the promontory. Also not to be missed is the city of Sandwich e Provincetown.

Getting around downtown Boston by car is a bad idea. If you arrive by car you can park it for a fee in the Cambridge area, for example, and travel by subway or on foot.

If the visit is divided into several days, you can purchase the subway pass for a week for $ 18. For day tours, you can opt for single tickets or the day pass which costs $ 11.

Hotels and lodges in Boston like New York are quite expensive. If you are looking for something cheaper it is advisable to look around Boston and in the small towns nearby.

To find the best offers, the best search portals are Booking and Agoda. If the reservation is made well in advance, good deals can be found.

When to visit the city

The best time to visit Boston is da June to October, when the climate is mild and walking is very pleasant. The temperature in the summer months can reach as high as 33 ° C. During the summer, many tourists also come to participate in baseball tournaments, outdoor concerts and festivals. In this period, however, the rates are the highest of the whole year.

On the contrary, winter is rather cold, with temperatures that even drop below -5 ° C and snowfalls are frequent. Lower hotel prices can be an incentive to visit Boston this season.

If you want to avoid the cold of the winter months or the high hotel prices during the summer, it is advisable to choose spring and autumn as the travel period. In this period the hotel prices are still good and the days have a less harsh climate.

Getting to Boston from Spain is quite easy also due to the presence of not only scheduled flights, But also low cost flights charged by Norwegian airline. Direct flights depart of Madrid and Barcelona, while from other Spanish airports the flight includes one or more stopovers. 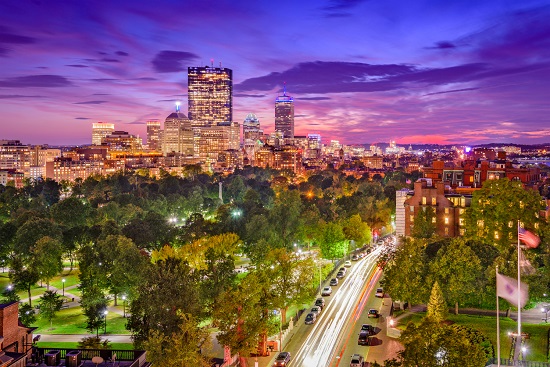