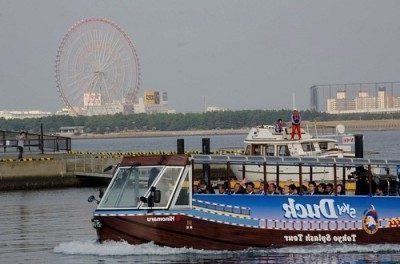 Sky Duck, literally the sky duck has also arrived in Japan. What's this? Perhaps you have seen it in other cities of Europe or the world, the one in London is famous and for example I tried it in Rotterdam.

In Tokyo it is called Sky Duck and is nothing more than a amphibious bus 12 meters long, 2 and a half wide, capable of accommodating 32 people and traveling at 100 kilometers per hour on land and 13 in water.

La local company Hinomaru has recently put into service 2 of these vehicles, which load tourists in Sumida, near the recent Skytree, the 634 meters television tower, and offers among other things the opportunity to savor "zen visions" of the picturesque Arakawa Natural Park .

In short, if you really don't know how to spend your time in Japan, try it, I remember that I was not really thrilled in Rotterdam! :)

add a comment of Sky Duck, the duck of Japan for tourism