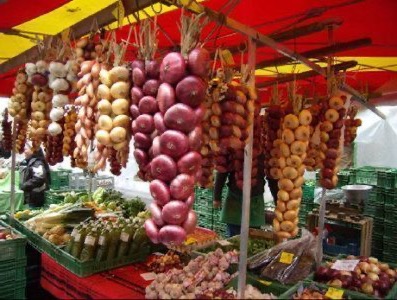 Today I received on twitter the advice from @SimoKitchenEB who suggested me an event that takes place every year in Bern, the fourth Monday of November (more precisely on the 26th for this year): lo Zibelemärit, the Onion Market. I have inquired and I can not help but propose it in my turn because it really seems a curious and interesting event.

It's a traditional festival with probably nineteenth-century roots (although some think it can even date back to the beginning of the fifth century!), during which the peasants of the area bring to the city 50 tons of onions, some also intertwined in an artistic way. Bubenbergplatz is crowded with tourists and the Bernese themselves who flock to the event since the morning before dawn.

This is an opportunity, as well as to buy and taste onions and all kinds of derivatives (such as onion cake or soup) in the restaurants in the city also for shopping for handicraft products, above all ceramics of all kinds, and gastronomic products such as spice cakes and sugar onions. The party ends in the afternoon with one battle to the sound of colored confetti.

How about taking advantage of promotions on the occasion of Christmas markets in Switzerland and reach Bern on the train?

Go by train to the Christmas Markets in Switzerland, promotion

Lugano, 8 things to see in Switzerland so as not to miss anything

5 things to do in Geneva in winter

What to see in the Jungfrau Region, Switzerland: 5 tips

add a comment of Zibelemärit, the Bern Onion Market