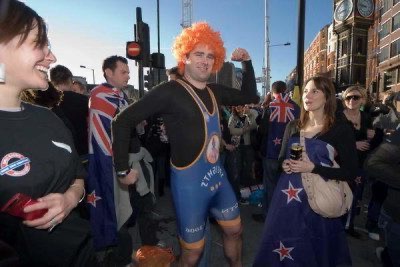 Il 4 February 2012 is celebrated on Waitangi day and in London it is a tradition that New Zealanders who live there find themselves a Paddington and take the Circle Line counterclockwise. From here every subway stop you get off and have a pint in some New Zealand club. A nice tradition.

Waitangi day is celebrated every year on 6 February, in London instead on the Saturday closest to 6, this year therefore on February 4. But what is celebrated on this day? The Waitangi was signed in 1840 and which transforms New Zealand into a colony of the British colonial empire, guaranteeing Maori their lands giving them the same rights as any other British citizen.

That's why every year in London before 16pm it is performed in the Parliament Square there traditional Maori dance to the sound of the Big Ben, followed by the singing of typical New Zealand songs.
The last stop with the subway in the evening usually takes place at pub walkabout near Temple Station. On facebook page you will always find all the information for those in London.

add a comment of Waitangi Day Pub Crawl in London