Valenca do Minho, Portugal but not too much 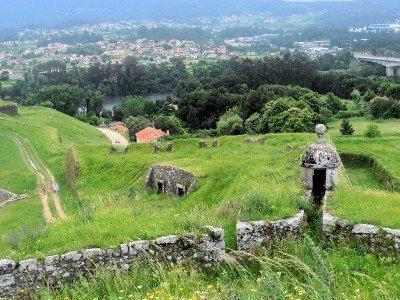 Valenca do Minho. No more Spain, not Portugal yet. It reminds me of the Almayer inn in "Oceano Mare" in Baricco. A place of convergence, a place that almost does not exist, like a mirage, an oasis of stone in the evergreen Minho valley, a corner of the world where everything fades.

A micro-environment sheltered from prying eyes, protected by the ramparts and the surrounding walls. A city that for centuries has stood imperiously on the portuguese shore of the Minho River, glancing at Tui and Galicia, so close yet unreachable. Just cross the Minho to find yourself immediately in the Galician Tui, just cross the Minho for time to become relative. Yes, because one step before it is 8 am and one step later it becomes 9 am time zone in its most concrete, most tangible expression.

And Valenca tries to find an agreement, the peace of hours and customs. A compromise between the precise and regular Portuguese life and comfortable Spanish routine, between one hour and another. Then you see restaurants that open their kitchen at 11 in the morning to close it only in the afternoon, reopen it a few hours later to close it late at night. Why business is business! And, if the Portuguese want to have an early lunch they want to get back to work immediately and the Spaniards have a late lunch because they only went to work in the middle of the morning; and, if the Portuguese dine and go to sleep early and the Spaniards go to dinner at night and pull until almost dawn, Valenca wants to satisfy both of them and they both leave Valenca satisfied.

And the women, Spanish and Portuguese, who come to the city for are satisfied buy cotton of all kinds at much more competitive prices than Spanish ones. Numerous small shops dot the streets paved with stone and attract the attention of tourists and locals with their bright colors and the priceless value of unique pieces handcrafted by old Valencan ladies.
Touristy but not too much, quiet but never deserted. Right compromise between vitality and relaxation.
Valenca is worth visiting, there is no doubt!

Audio Video Valenca do Minho, Portugal but not too much
Central Market in Budapest, where to shop ❯

In Evora, in rural Portugal

Algarve, how to reach it from Lisbon

Five things to do in the Azores, Portugal

How much does 1 coffee cost in Lisbon?

add a comment of Valenca do Minho, Portugal but not too much