Travel to Tanzania: all the tips on how to organize it

A trip to Tanzania is a journey into pure nature, Tanzania is the land of safaris, is a continuous show in which we witness the circle of life live. Before this trip I had already done other safaris in Namibia and Botswana, but I had never seen anything like it. The amount (especially of cats, but not only) that I have seen here .. never in my life! In the Serengeti we saw an average of 20-30 lions / lionesses per day and 1-2 hunting scenes a few meters from the jeep, it was like being inside a National Geographic documentary!! Just thinking about it makes me shiver. If you love animals and have to choose where to go, well, go to Tanzania, because you won't see anything like it anywhere else in the world. 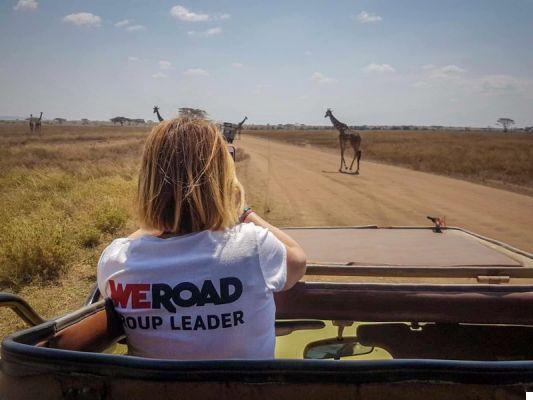 When to go to Tanzania

The high season corresponds to the months of July and August (which is the period of the famous wildebeest migration between the Serengeti and the Masai Mara park in Kenya); let's say that every month between June and September are perfect for spotting animals. In fact, in these months there is little water, the leaves are few and the animals are forced to move towards the few water sources present in the parks. AND high season also in the months of December and January (migration occurs again and Europeans are on vacation), while the low season corresponds to the months of March, April and May, months when it rains a lot and some facilities are closed. 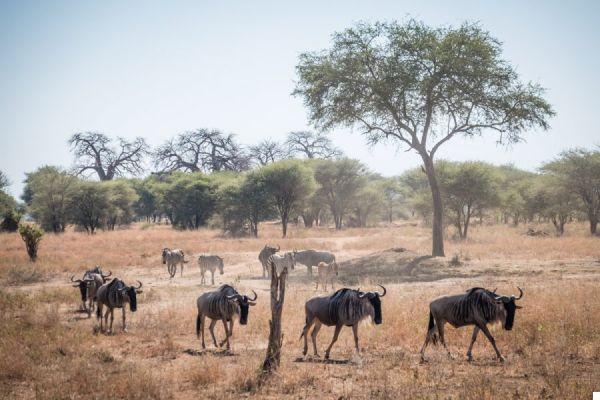 How to reach Tanzania

I major airports in Tanzania (at least for those coming from Europe) are those of Zanzibar, Dar Es Salaam and Kilimanjaro. THE flights to / from Zanzibar are the cheapest and they are often direct flights, both scheduled and charter. The departure base of the safaris, however, is Arusha, so you will then have to take a domestic flight there, and these flights are mostly carried out by small planes (even 15-30 seats). I have to be honest, I am afraid to get on these planes usually, but there I had no problem: 1 hour of flight more than comfortable!


The alternative is fly directly to Kilimanjaro (it is located about 80 km from Arusha); from Spain there are many companies that allow you to get there with a single stopover (Turkish, Emirates, Qatar, etc.). 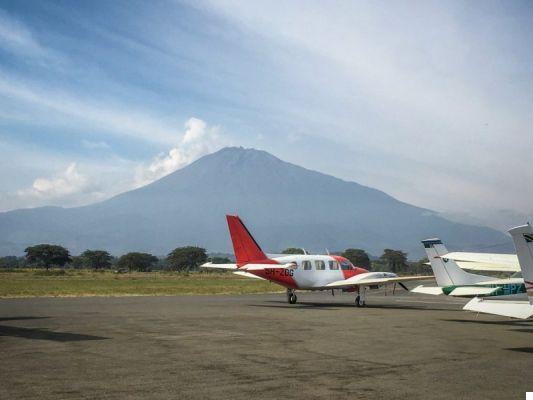 Visa and vaccinations for Tanzania

To enter Tanzania it is necessary to have a visa, but don't worry: the visa can be purchased directly upon arrival at the airport for the modest sum of $ 50. In some cases it is possible to pay with VISA or Mastercard (this was the case for me), but it depends on the airport and arrival time. If you cannot pay by credit card you will have to pay cash, so my advice is to bring some dollars with you (if you want there is also a change at the airport in case).

There are no mandatory vaccinations to do before going to Tanzania. Tropical diseases are widespread both in the continental part of Tanzania and in Zanzibar (although the incidence of malaria is very low in Zanzibar). There dengue fever and hemorrhagic dengue, again caused by the bites of infected mosquitoes, are endemic everywhere. The most important thing to do is to protect yourself against insect bites. However, always consult the website of the Ministry of Foreign Affairs before leaving to get all the updates. Personally, having been there in August, so in the dry season, I decided not to do anti-malarial prophylaxis (there were some mosquitoes but nothing special). Going to other seasons it might be better to do it, but follow the advice of your doctor and the instructions of the Farnesina. 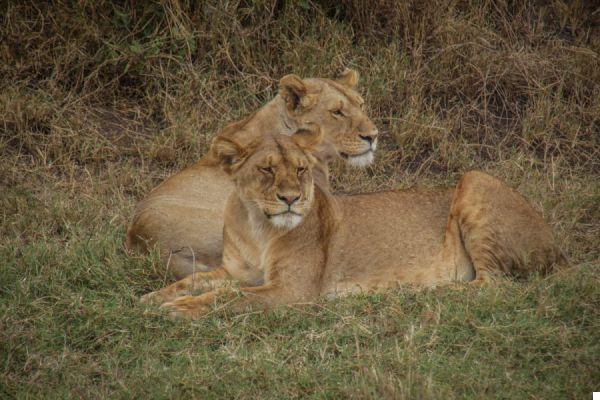 In Tanzania our health coverage is not valid. My advice is to always take out medical-luggage insurance that can cover you during the trip. I am very happy with many insurance companies, a site that compares the policies of different companies and proposes the most convenient policy for that particular trip. To do this you will have to enter the data relating to your trip (country, duration, etc.) and they will send you an email with the best proposal that you can then buy directly online (!!!).

Currency in Tanzania: can you also pay in euros or dollars?

The official currency of Tanzania and Zanzibar is Tanzanian shilling (TSH). Being quite a touristic place actually they also accept dollars or euros (in general the dollars are better anyway) and the prices of the excursions (and a little bit of everything) will tell you in dollars. If you pay in euros or dollars, however, they almost always give you the rest in shillings.

I cash machine are found only ad Arusha, Karatu and Kilimanjaro airport so my advice is to start with a nice stack of cash (maybe dollars), because you may have difficulty withdrawing. You can pay directly with credit cards, but only in some places, and often with a 5-6% surcharge (in fact it is never convenient!). 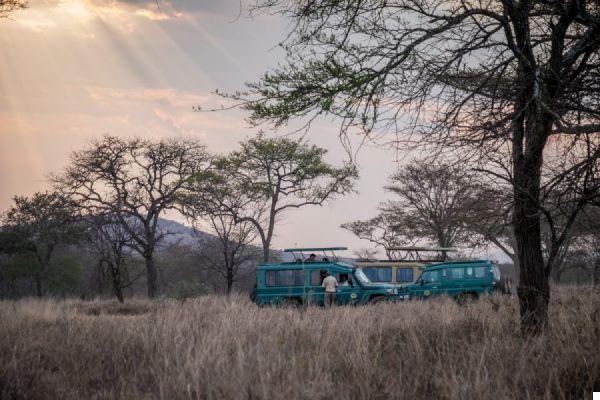 Safari in Tanzania: all you need to know 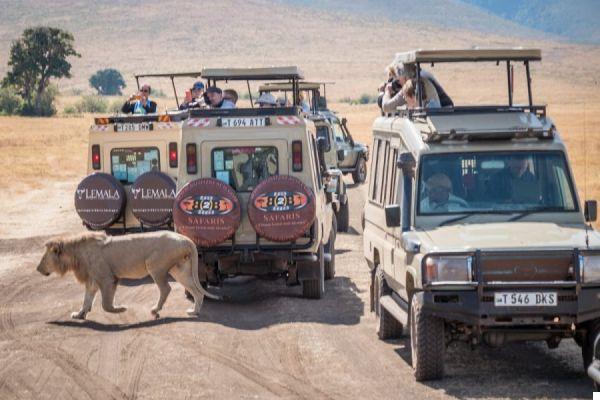 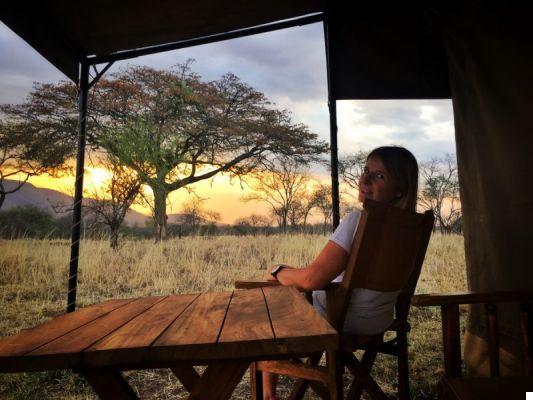 While you go there, why not extend the trip by a few days and relax by the sea? I did it and went to Zanzibar. In this way, among other things, you can evaluate to arrive in Kilimanjaro and then leave from Zanzibar. In the article "Zanzibar: what to see, when to go and various tips “find all the info.


Internet and mobile: how to buy a local sim

If you want to always be connected but don't want to spend a fortune I highly recommend you buy a local sim (find the stalls that sell it to you in the airports). The operator that works best Vodacon, but it doesn't take just everywhere (inside many parks there is no reception). In general, however, the wifi is enough, both in hotels and in clubs and restaurants and it works discreetly. 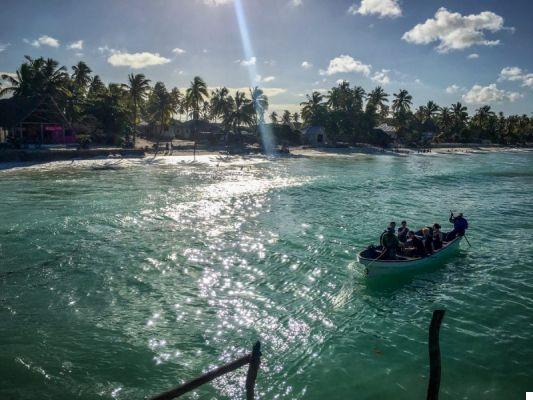 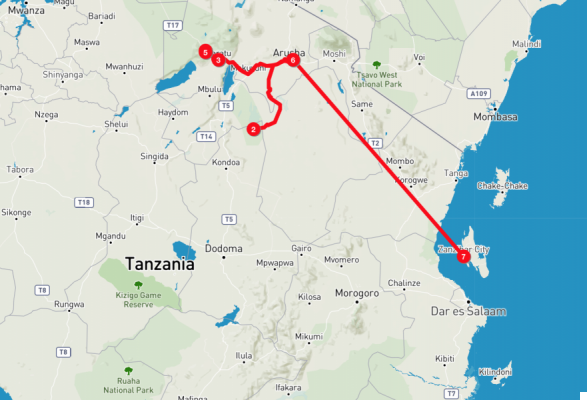 What to see in Tanzania

This park is the first one you visit and it is unique, it is completely different from all the other parks you will see later. L'Arusha national park is located at the foot of two very famous mountains of Africa (but not only), the Kiilmanjaro (the highest peak on the African continent, 5895 mt) And the Mount Meru (4565 mt, the 4a) and, if you are lucky, you will be able to see the summit of both clear of clouds. It is a park full of greenery and is extremely green even in summer. Here you can go on a walking safari (and I advise you to do it because it will be the only place where you can do it), because there are few predators and it is not particularly dangerous. The safari is done with 1-2 armed guides and you can see several animals from very close (giraffes, buffaloes and several others). This is also the only park where you can spot the monkey called Guereza, with long fringes of white fur that stand out on the black body. 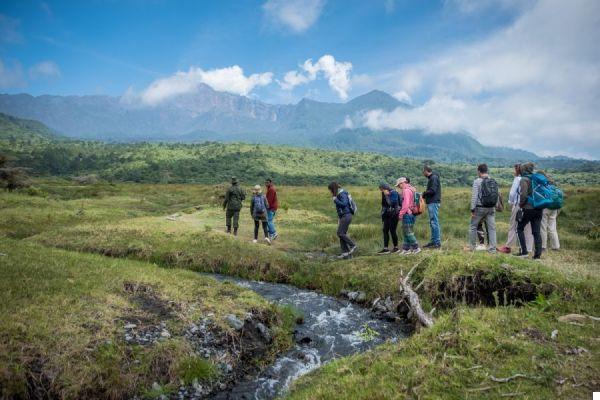 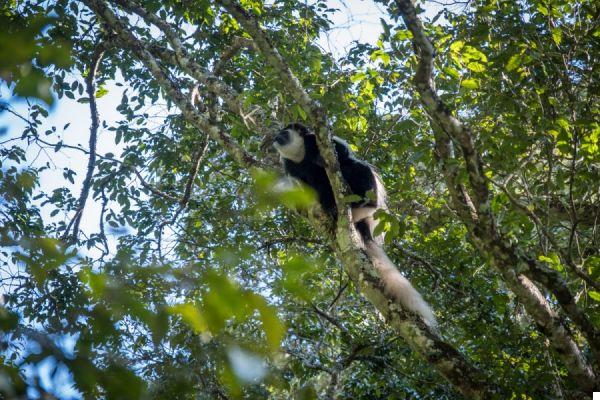 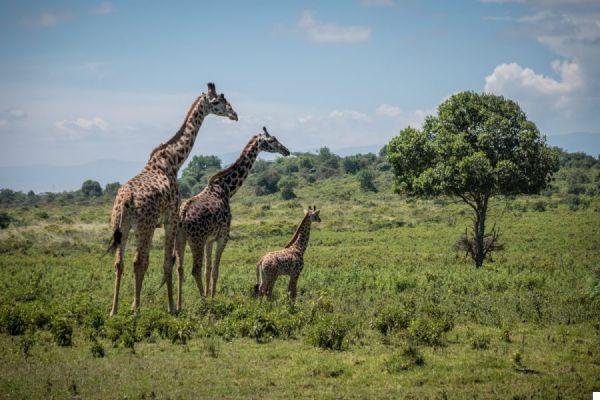 If it is true that each park has its own peculiarity, that of Tarangire is there presence of baobabs, huge, scattered over a gigantic surface. Here you will also begin to see the first predators (we have seen a beautiful leopard), herds of elephants, buffaloes, giraffes and many other animals. The landscapes are very beautiful and varied. After the Serengeti is the park with the highest concentration of wildlife (just think that there are more than 700 sedentary lions !!). 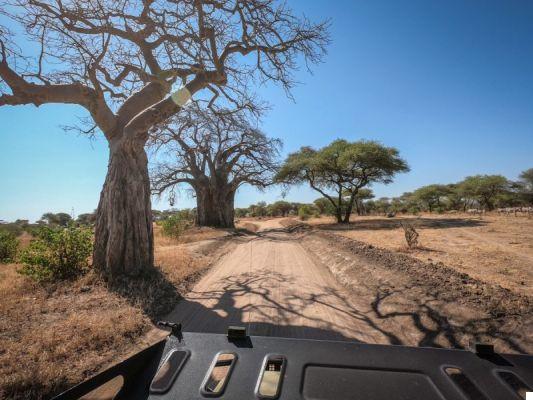 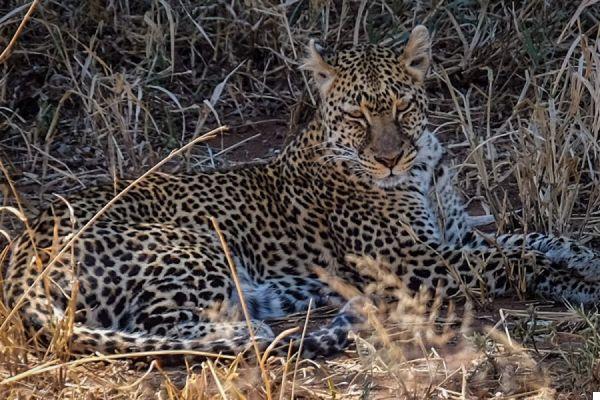 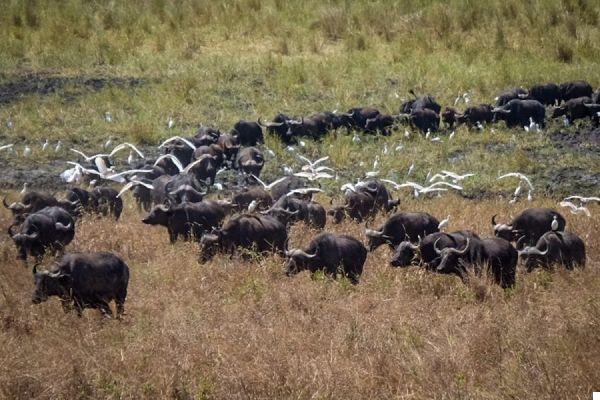 Il Lake Manyara National Park it is a less spectacular park than the others, but it contains 11 ecosystems. The park surrounds the lake of the same name and borders the escarpment of the Rift Valley; here you can see hippos, elephants, baboons and the famous tree lions (which are very difficult to identify among the vegetation). Relatively close to the lake there is the town of Karatu which represents, for many safaris, the starting point for the Ngorongoro. Apprenticeship is an authentic small town with a huge market which is absolutely worth seeing (don't be scared, but you will be the only white faces!). Here is also a orphanage (maybe even more than one) run by Save The Children, where you can go and bring things if you feel like it. The orphanage is called Shalom Orphanage Center. Do not be fooled by the fake Masai villages that you will find along the road from Lake Manyara to Karatu: they are there especially for tourists !! 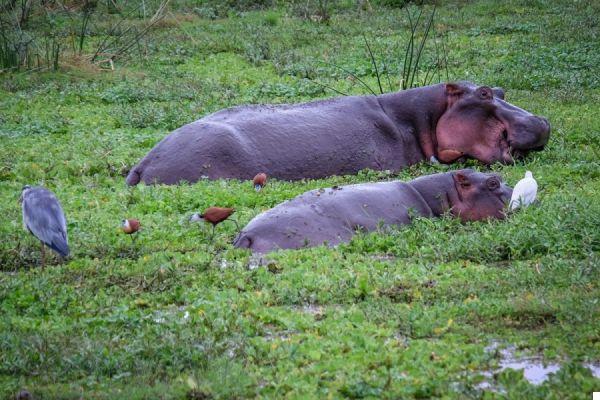 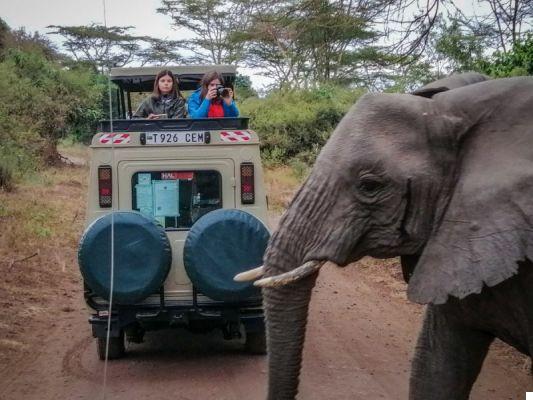 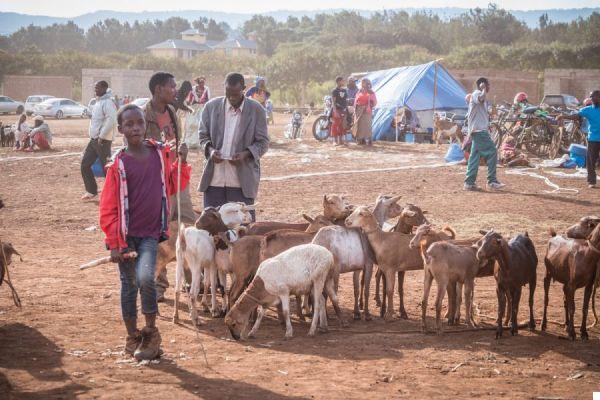 This itinerary has been studied in the world to amaze the visitor more and more, park after park, and it is indeed so. The Ngorongoro it is considered one of the most incredible parks in the world because it is located within a crater of an extinct volcano. From Karatu you go up to the crest of the caldera and then descend inside, on a journey to discover a lost world and the view from the top of the crater is nothing short of crazy! Inside you will see lions (many, many!), Hippos, wildebeest, antelope, buffalo and so on and so forth !! There is only one word to describe it: unmissable! 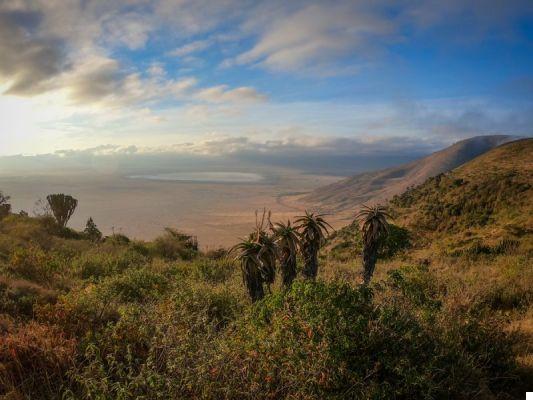 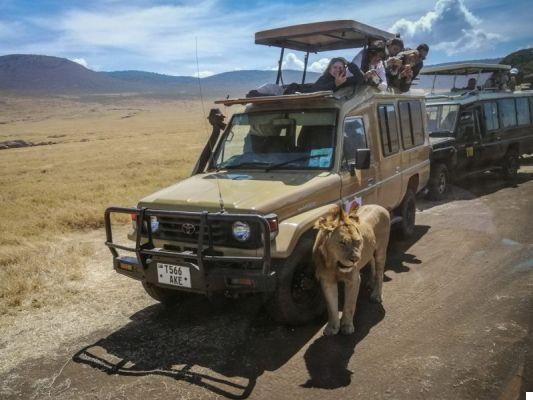 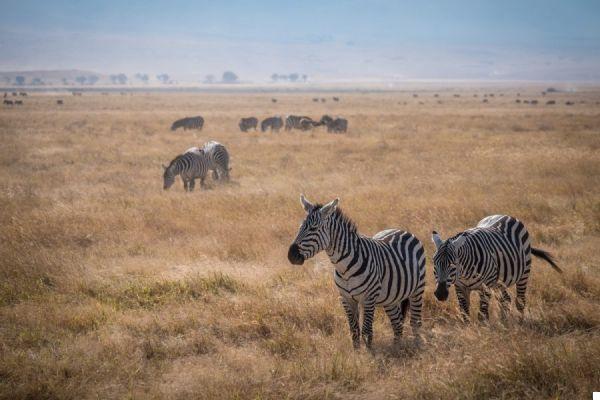 The trip can only end in beauty with a visit to the park which has the highest concentration of wildlife in the world. The Serengeti it covers an immense surface (usually it takes at least 2 days and 2 nights) and has different types of habitats. These are the landscapes of "The Lion King", the territory where it has been renewed for millennia the famous migration of wildebeest and zebras to and from the Masai Mara in Kenya. Here I saw dozens of lions every day, 2 hunting scenes just a few meters from me and… I still hardly believe it! Here I slept in a tented camp (not fenced!) Surrounded by animals and lulled by their calls, and it is a beautiful experience that I recommend you do. After seeing the Serengeti I sincerely believe that every other safari you will do will never seem up to par. 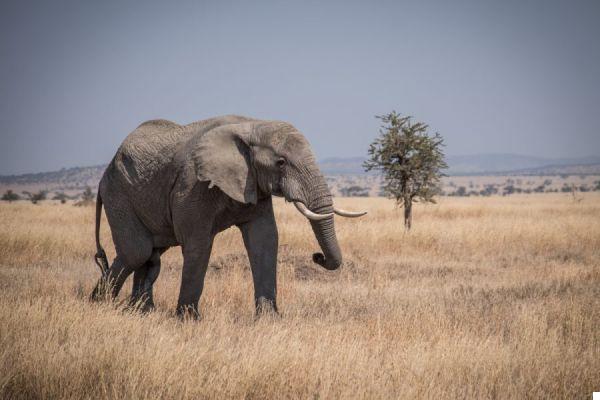 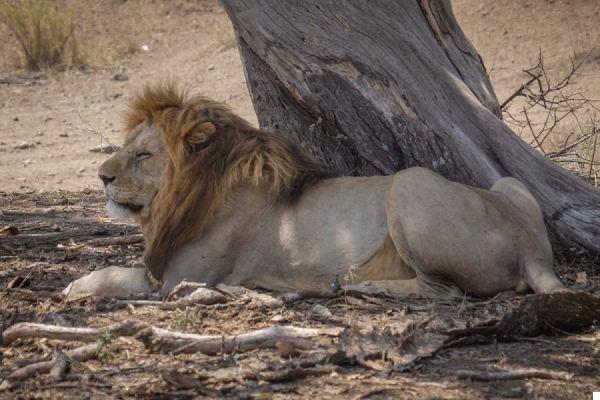 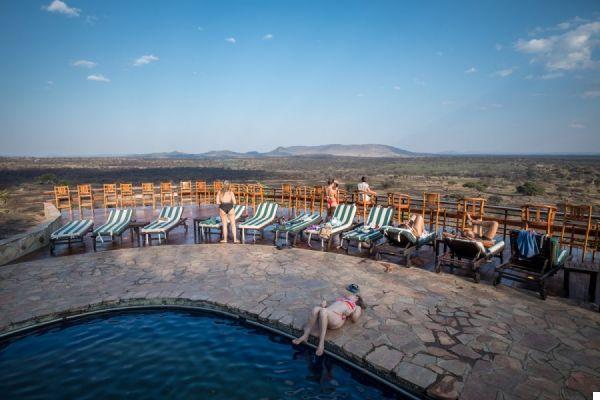 What to bring for a safari 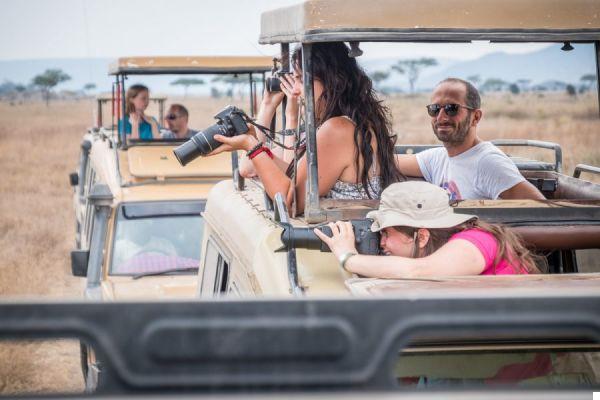 Travel to Thailand: how to organize it ❯

Africa, moving at a slow pace

Travel to Zanzibar, the island of happiness: what to see and the most beautiful beaches

Zanzibar, 5 unique things to do

Zanzibar: what to see, when to go and various tips

add a comment of Travel to Tanzania: all the tips on how to organize it