Tortoreto: between the historic village and the seafront


If you are a lover of stays divided between sea and historical visits, Tortoreto is the ideal place to visit. Get ready to leave for this Adriatic gem!

A Tortoreto, whatever your idea of ​​a holiday is, you will find what is right for you. Located in the province of Teramo, this town offers a 4 km long equipped promenade flanked by a comfortable cycle path.
Behind it, the hill contains the history of the town from its origins. Not only that, several discos, in the surroundings, enliven the evenings of those who live the night and a wonderful water park welcomes even the little ones.

Let's start our tour immersing ourselves in the history of this jewel of the Adriatic.

On the hills, a few kilometers from the sea, stands Tortoreto Alto, a medieval village, consisting of the ancient medieval village and the two areas of Terravecchia and Terranova.

Entering the town, one encounters the imposing Clock tower, part of the ancient fortified castle. The structure was built at different times and with different materials: the base of the Tower built in the 1800th century with river stones; from the Middle Ages are the arched door, through which one could access the castle; the arches of the upper part are from XNUMX.

La Church of the Madonna della Misericordia instead, it preserves the pictorial art of the Renaissance: inside the chapel is covered with marvelous sixteenth-century frescoes with episodes of the Life and Passion of Christ attributable to Giacomo Bonfini.
The church was built in 1348 to thank the Madonna della Misericordia for not having been hit by the terrible plague that plagued Italy the previous year. 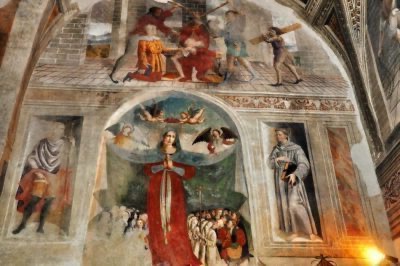 La Church of Sant'Agostinofinally, it is a construction in the Baroque style. Inside there are six altars and a pipe organ from 1850.

And after a walk through the ancient streets of the town, capable of taking you back in time, you cannot fail to enjoy the panorama from the viewpoint of the terrace of the Fortellezza. Once a military checkpoint, today it allows you to admire a breathtaking view of the coast. The historic center is also full of restaurants offering traditional dishes and shops selling typical products.

And now we move to the sea, I take you to Tortoreto Lido.
With its 4 km of beach of fine golden sand, Tortoreto Lido is one of the most interesting seaside resorts on the Abruzzo coast. The long cycle path and the promenade, framed by pine trees and palm trees, enrich the promenade. Tortoreto has been awarded several times with the Blue Flag of Europe.

During the summer you will not get bored for sure: the city is animated by musical and sporting events, popular festivals that offer the Abruzzo culinary tradition and many of the bathing establishments stay open late with music and theme nights.

Every year, in mid-August, it is organized the important "Palio del Barone", an event during which the two ancient districts of Terravecchia and Terranova challenge each other in the re-enactment of medieval games. The fireworks from the Tower at the end of the event are particularly beautiful.

We conclude our tour in style: with a day full of games and adrenaline at Acquapark, the famous water park in Tortoreto, open from June to September.

I told you, there is something for everyone. The password in Tortoreto? It is forbidden to be bored.

Audio Video Tortoreto: between the historic village and the seafront
Alghero what to do and see in Sardinia ❯

add a comment of Tortoreto: between the historic village and the seafront