Three days in the Itria Valley between Polignano a Mare, Trulli and bowler hats. The typical street food of this part of Puglia but also many low cost indications to eat well by the sea and spend very little in Puglia.

Have you ever felt like tourists in your land? I always. I can punctually buy a different souvenir in villages seen and reviewed. I can look at something that I happen to see more than two, three, four times a year with new eyes. I manage to look like a tourist in the eyes of a tourist. And frequently there are questions from waiters or shopkeepers who ask me: "Is it your first time in Puglia?".

Well, I have lived in Puglia for 26 years and it will be for the land, for the genuineness of those who live there, for the colors, the scents, for its small progress that make it fragile (apparently) but at the same time so alive and lived ... well it will be for all this but me I fall in love with my Puglia at every corner, it doesn't matter if already seen two, three, four times a year. 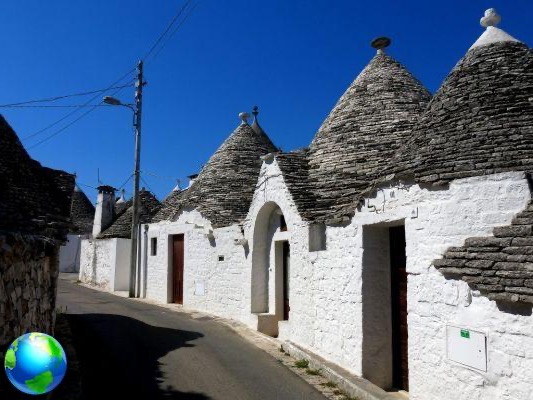 This seemed to me the most correct premise before taking you to one of these corners: the Valle d'Itria! If summer in Puglia is now associated with Salento by many (a little further down, geographically), I will tell you about summer or fragments of summer in Valle d'Itria. Yes, because for those who want to immerse themselves in a few days of relaxation, away from the canons and in any case accessible to the entertainment of the beaches of Gallipoli, the Itria Valley is simply perfect.

I have been there (back, I would say) in mid-August of this year, in one of those improvised three-days in the company of a couple of friends and my favorite wind, the mistral. 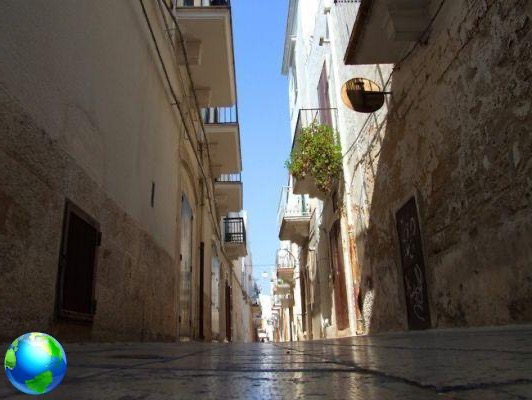 It goes without saying that those who arrive in the Itria Valley cannot fail staying in a quaint Trullo. Forget about hotels or campsites, and stay overnight in one of these marvelous centuries-old constructions, conical and in dry stone. They look like little hobbit houses and sleeping in them really leaves its mark. I found this beautiful trullo on AirBnb, in a small hamlet of Cisternino, in the middle of Selva di Fasano. With a lot of garden, barbecue and hamaca. But there are many beautiful structures in the Valley (which is the homeland) and a lot of people who make them available as a B&B.

So I let my three-day itinerary in Valle d'Itria be guided, as well as inspired, by the North-West wind. 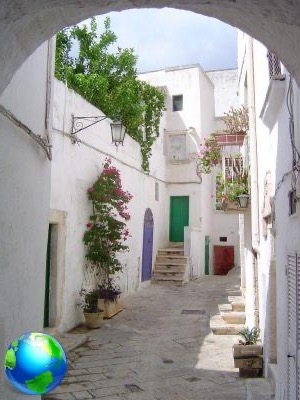 Once we reached the quiet of our trullo, it was not easy to convince ourselves to go to the sea. But we are in Apulia, we are not talking about any sea (let me be biased!). The Adriatic coast, however, is always more windy than the Ionian and of course the three days of the mistral could not be missing in mid-August. So of the sea we have only seen the waves and of the beach only a lot of people who have survived the past night.

Desperate for a few less windy knots at Lullabay a Pink Marina (destination chosen for our non-bathroom), we came across a beautiful "mobile" environment in gipsy style in the shade of olive trees, very 60s, where among caravans, used clothes, DJ sets and delicious centrifuged we let the central hours of the day slip away without even realizing it!

At dusk we decide it was time to stop at Ostuni, the white city. Note to everyone, right? It stands on a hill and is recognizable in the distance as beautiful and elegant as ever. This village captivates especially with its historic center that winds through narrow streets, in shops of handmade sandals and in restaurants that seem to compete for the most romantic atmosphere. We choose the Bellavista bistro, characteristic for being in a cave, but on August 16th it is impossible not to want a table under the stars and in the whiteness of the alley to end the day. 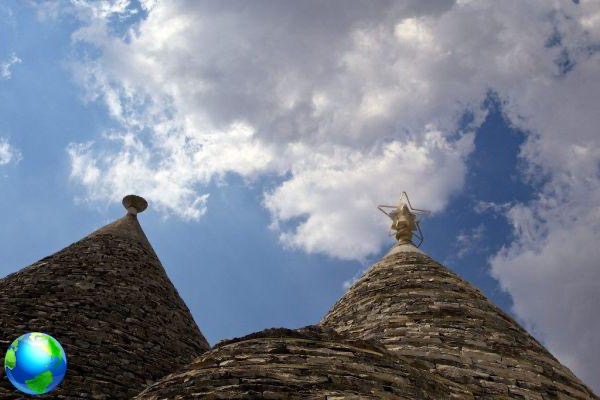 Alberobello and the bowler hats

We redeem the non-bath of the first day in Valle d'Itria the following day at the nature reserve of Torre guaceto (protected sea area). A shuttle train crosses an avenue where tomato crops and other vegetables of the best Apulian tradition alternate on the right and left, you reach high sand dunes that only after a short time make you see the beauty of the place, with an expanse of beach ( for a piece equipped, for the rest free) that reaches up to the famous tower and an infinite sea (even if not very clean on that occasion due to the mistral, always the same).

We have lunch with a sandwich taken from a kiosk that uses products at almost zero km (capocollo di Martina Franca, mozzarella, etc) and in the afternoon we move to Alberobello where, in addition to people, there are trulli, many trulli. Of all types, of all sizes and each with its own symbol of recognition on the cone, pagan, Christian, magical and / or propitiatory. Alberobello, in its small central heart, it seems drawn. These houses are enchanting all together, the glance is able to amaze anyone, even those like me who have already been there two, three, four times a year! 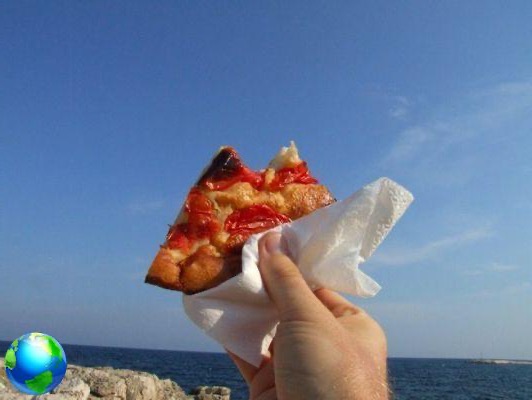 Hunger, however, between one trullo and another, is felt and the call of the famous ones bowler hats of Cisternino increases more and more! I won't describe the goodness of these breaded and cheese-filled pork bundles, any attempt would not do justice. I only tell you that in the renowned village of Cisternino there are here and there butchers with rustic rooms annexes where between house wine and meat (+ bombette) chosen directly from the meat counter I can't tell you what level of culinary paradise (among the best known and tested butchers I point out "Sante butcher's shop","Arrosteria del vicoletto","At the Old Cooker").

Not satisfied, and more than anything else driven by the need to take a “digestive” stroll in the beautiful streets of the town, we headed to the “Cremeria Vignola” bar. The café is located on a small terrace in the town from where you can enjoy a spectacular view; and being able to sip an amaro or enjoy an excellent dessert during contemplation is the added value of the place.
And this is how we ended the second day of our tour in Valle d'Itria: happy, full and satisfied. 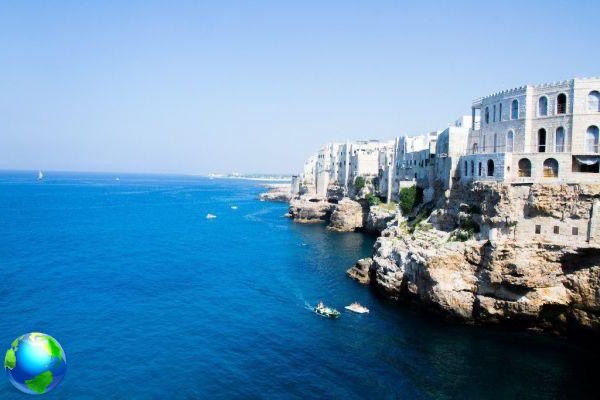 Polignano a Mare and street food

Third day of the mistral wind, beautiful strong and decisive to the point of making us exclude any slightest intention of reaching the beach. So, after waking up in total relaxation in the garden of our beautiful trullo, we left the forest and headed north, aimlessly.

Even today I can't visualize in my mind the exact moment we decided to stop for lunch at Santos, a Greek tavern a few kilometers from the famous Savelletri lighthouse. The fact is that we found ourselves in this beautiful restaurant, with attention to every detail, and overlooking the sea with its lido dog-friendly. The menu is obviously based on fish and some Hellenic specialties. The white of the restaurant and the blue of the Adriatic collide in a perfect chromatic union with rows of prickly pears that give liveliness to everything, even to thoughts. Here, in addition to eating well, we let ourselves be pampered by the wind and the sea breeze that is the queen in such a beautiful place! 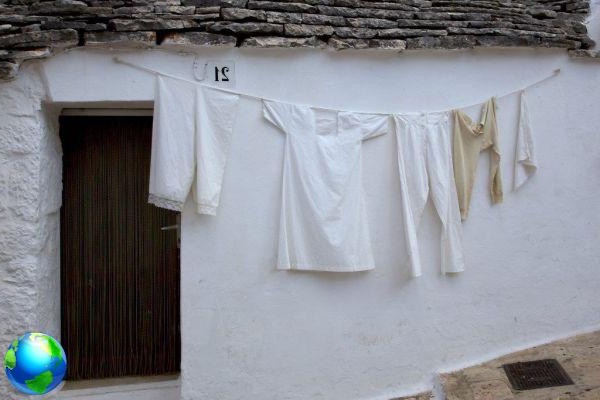 We didn't leave much room for re-entry nostalgia though. Continuing a few kilometers further north, stage a Polignano a Mare it is a must, or so our Domenico Modugno has always let us believe. Losing yourself in the beauty of this village will not be difficult, indeed it will come so spontaneously that you believe you have had a Stendhal Syndrome.

In my opinion Polignano a Mare is urbanistically oriented to go in search of the sea, it is the city itself that offers breathtaking views. Thus the one behind the famous statue with open arms of the aforementioned Modugno; or what you can enjoy from the terrace of the Peppino Campanella's glass workshop; or again, the one that is contemplated on the bridge that crosses the beach of "Lama Monachile". Then try to cross the Marchesale Arch, the ancient city gate, and enter the historic center: you will certainly agree with me. 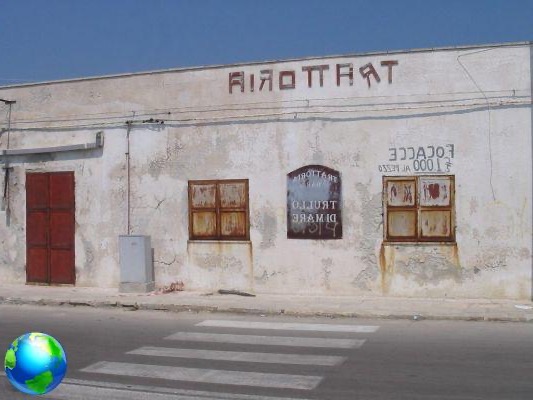 Each lane leads to a panoramic terrace, one more beautiful than the other, and do you have any idea what this could mean at sunset? For us it meant a desire for fried fish. I don't want to ruin the romantic atmosphere in which I would melt too, but in Puglia if you start eating, you never stop. Take this as a warning!

Let me conclude, therefore, with one of the most suitable locations to savor the real "street food ”from Puglia. I give you only key words this time: Torre a Mare, marina, seafront, "Cooperativa dei Pescatori", plastic tables of the red ones and branded "Peroni", fried fish, sandwich with roasted octopus (!) And ... it goes well in our case so much mistral. 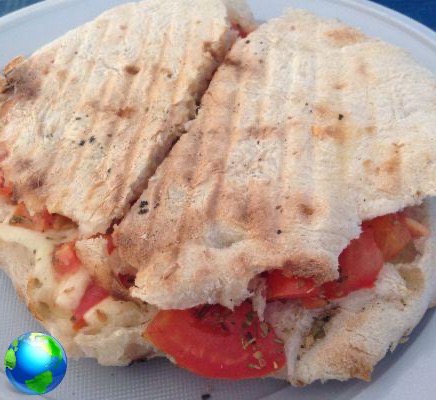 I must say that many other pearls of the Valley are missing (Grottaglie, Locorotondo, Martina Franca ... just to name a few), but in just three days, following this itinerary, you will be able to get an idea of ​​how beautiful (and good! ) this little piece of Puglia. So, weather forecast in hand, hunt for the mistral and off you go, rolling towards trulli, bombette and Valle d'Itria.