The Navelli Plateau, 3 stages not to be missed

Hidden in the Navelli plain, there are some of the most evocative villages of Abruzzo: a visit to discover medieval traditions.

When you think aboutPlateau of Navelli, automatically the mind runs to a nice plate of saffron risotto. 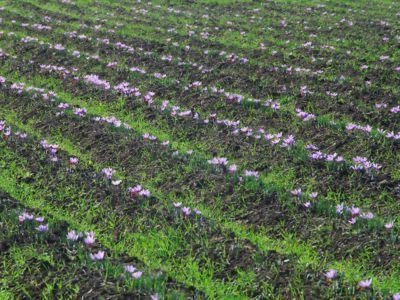 The cradle of saffron

It is in this area that lo is produced saffron from L'Aquila PDO, whose origins even date back to the Inquisition period.

A Dominican monk belonging to the Santucci family brought a plant from Asia and cultivated it on the plain, finding favorable conditions.

1. Barisciano, a town rich in history

Defined "the middle ground of cinematographic memory“, The plain of Navelli hosts some of the most evocative Abruzzo villages.

One of these is barisciano, crossroads between the Campo Imperatore plateau and the Navelli plain. You could start your visit from this town which is just under twenty kilometers from the city of L'Aquila.

Of ancient origins, before the year XNUMX, it seems to be its construction. It is said that the inhabitants contributed to the construction of L'Aquila. Particular are the celebrations of San Giovanni Battista, June 24, for which a large hearth is lit, which young people should go through as an act of virility.

Fontecchio is also of great interest, which is partially surrounded by walls and full of alleys and stairways.

S. Demetrio Ne 'Vestini, where the Stiffe Caves, created by an underground stream coming from the Rocca di Mezzo plateau.

Defined the ghost town, Camponeschi Castle, within the municipality of Prata d'Ansidonia.
This small village rises hidden by its walls: something unusual, because usually the normal walls coincide with the external walls of the houses.


It's called a ghost because uninhabited since the XNUMXs. Furthermore, due to the earthquake of 2009, the renovations that would have restored luster to this hidden gem, to the six hundred and seventy-ninth place of the FAI ranking, places not to be forgotten. 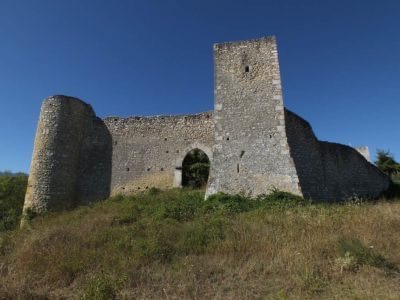 The villages mentioned above are just some of those that populate the Plain, small suggestions to start planning your ideal visit in a place that really deserves the attention of tourism.

In the post we offer you an idea of ​​the route starting from Barisciano, passing through L'Aquila and descending towards San Demetrio ne Vestini, S. Pio delle Camere, Navelli and Prata d'Ansidonia.

Audio Video The Navelli Plateau, 3 stages not to be missed
I recommend to stay overnight in Tivoli, B&B Villa Adriana ❯

add a comment of The Navelli Plateau, 3 stages not to be missed