The Nativity scene in the Well of the Quarry of Orvieto 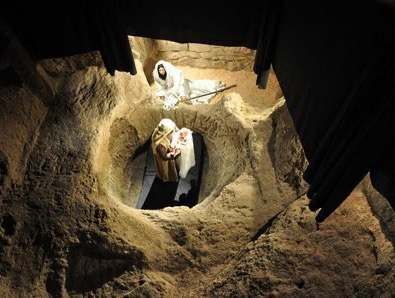 Orvieto, for those unfamiliar with it, it is a splendid city on the surface and in depth! In fact, the circuit that leads to the discovery of Orvieto is of considerable interest underground and part of its 1200 cavities between tunnels, caves, Etruscan wells and artificial cisterns that are found under the cliff on which it stands.

For Christmas this path takes on an even more magical air, as inside the Well of the Cava (in the central Via della Cava in the middle of the medieval quarter) a suggestive nativity scene is set up, unique in its kind and absolutely not to be missed, which this year has as its main theme the "covenant" between God and his people.

The Crib of the Cava is located in the last one cave of the Well to allow the visitor to admire, during his descent, all the archaeological finds that are found along the route and gradually become an integral part of the representation of the Nativity.

The characters are made a natural size which are reproduced by adopting special three-dimensional effects, the same used in theatrical performances, and are equipped with mechanical devices that allow their movements. All to recreate a more realistic effect as possible and load this already exciting setting with pathos.

The Nativity scene in the Pozzo della Cava will be open every day starting from 23 December until Sunday 13 January; from 9 to 20. Full admission is 3€; the reduced price of 2 euros (students, seniors, minors and previous edition ticket holders) and both include the complete visit of the Well. Children under 5 get in for free!