The King's speech was filmed on a pornographic set 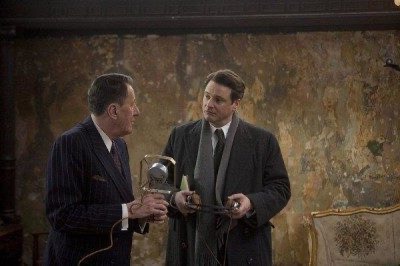 What is surprising de The king's speech, a great film that has won many Oscar awards, are its locations. But not the ones we all know, so Buckingham Palace or some corner of London. What is really surprising is the location where most of the scenes where the Prince Albert meets and holds lessons with the speech therapist Lionel Logue.

To reveal where those scenes were shot is nothing less than Queerclick com a site for men only. The scenes in question are all shot in a room with a very recognizable wallpaper. The same one located at 33 Portland Place, also used by the Uk Naked Man production company to shoot pornographic films.

Now, I, who wanted to talk to you about the historical locations of the film, stop here, here is the news, you will recognize the other scenes very well, those shot in London, including the aforementioned Buckingham Palace, but also the beautiful Westminster Abbey, and the Wembley Stadium.