The charge of the carabinieri on horseback near Verona, historical re-enactment 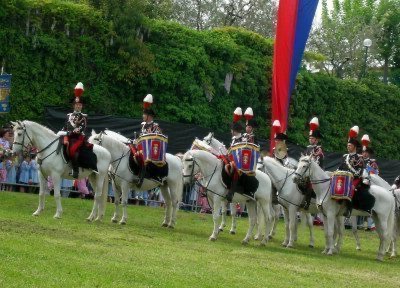 Tuesday April 30 a pastrengo in the province of Verona, the municipality remembers with a historical re-enactment the Charge of the Carabinieri of the first Italian War of Independence. This year it celebrates the 165th anniversary.

It was the year 1848 when King Carlo Alberto, committed to leading the Piedmontese troops on the territory of Pastrengo on the occasion of the first Italian War of Independence, went too close to the Austrian line led by Marshal Radetzky. The sovereign's safety already seemed compromised when i Royal Carabinieri on horseback they intervened with a sudden and effective charge that guaranteed their safety and the victorious resolution of the military operation. From that day the municipality of Pastrengo remembers the glorious historical event with the re-enactment by the Squadron Group of the 4th Carabinieri Regiment on horseback as part of the historic Carousel.

Lo show, very impressive is an interesting opportunity to get to know one of the salient facts of Italian history but also to deepen the exploration of the territory which still retains important buildings of the time. Both in the days preceding the anniversary of the battle of Pastrengo and in the following days, in fact, guided tours are organized to the Austrian Forts in the area, the Optical Telegraph and the Fortino Belvedere overlooking the battlefield.
The complete program on the site Proloco Pastrengo.

Audio Video The charge of the carabinieri on horseback near Verona, historical re-enactment
Liverpool on the trail of the Beatles: 5-day tour ❯

add a comment of The charge of the carabinieri on horseback near Verona, historical re-enactment