Itinerary on foot or by bicycle with many suggestions for Street Art lovers, Milan hosts numerous works, many of which are truly innovative: ten addresses to mark!

Many tourists and others choose Milan for the works of art that its museums almost jealously keep in their rooms but many do not know that this city is a real open-air museum. Always recognized as the capital of fashion and design, the Lombard capital is also an artistic incubator par excellence. To date the boom of murals in Milan we have to go back in time to the not-so-distant June 2015 when the municipality of Milan instituted a tender, providing 100 free walls for the street art in the city. 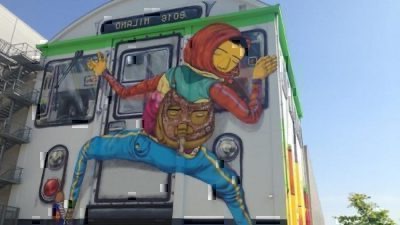 Street Art in Milan: the goal

The objective of this initiative was the requalification and the enhancement of the suburbs putting an end to prohibition and developing creativity and artistic spirit.
The places involved were: overpasses, enclosure walls, underpasses and overpasses belonging to the municipality or member organizations and companies.
But what are they the most beautiful murals that can be visited in Milan?

Discover the Street Art of Milan

Here is my personal itinerary to follow on foot or by bicycle to be carried away by the unique beauty of this city, discovering not only this form of art but also the history of Milan as many artists have wanted to pay homage to it with their art, telling it through characters, events and its identity.

Di Millo, Garden of cultures via Morosini 8: the work of Francesco Camillo Giorgino aka Millo who in 2015 gave two murals to this small garden. The place is home to numerous cultural activities including parties, markets, aperitifs, bookcrossing and street food. Easily recognizable from his black stroke on white, the work created on the blind walls of two buildings represents a boy looking for love in a big city and a girl with a sling who throws her heart to the whole world. The only color that stands out is the red of the two hearts. 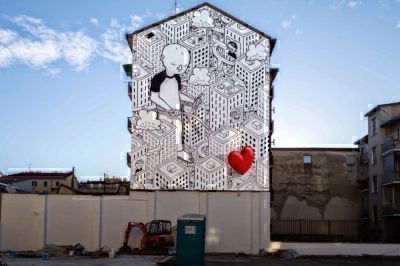 The Corso di Porta Ticinese is also famous for hosting several works of stencil art and also the very recent work by TV Boy dedicated to Chiara Ferragni, continuing towards Via Torino. 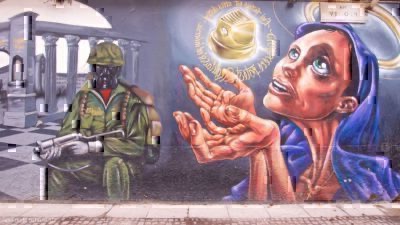 This neighborhood near the city center was once one of the creative districts. Starting from the underpass of the Garibaldi Station it is possible to observe a colorful gallery resulting from the "Escoadisola" project of 2011 in which several artists were involved but also students of the Boccioni Art School. Moving to via Carmagnola it is possible to observe the posters of Hogre, highly contested by the authorities because he made his art a means of citizen protest. In via Antonio Pollaiulo, at the completely painted entrance of a historic restaurant, the Frida, we find one of the Arnold di Zibe.

In via Cola Montano we find one of the most Instagrammed murals of recent years: The Don Gallery, a gallery completely dedicated to street art founded in 2008 by Matteo Donini aka The Don that hosts works by veteran street art artists but also new emerging recruits. Via Angelo della Pergola, a magical road where you can see works by Microbo and Ozmo and more. The works contaminate each other by merging and recreating themselves. At the corner of this street is again another Arnold of Zibe surrounded by Ozmo's Virgin of Guadalupe and Ryan Spring Dooley's Angel.

It is located in Largo la Foppa: a 176 square meter wall that since May 2017 tells the story ofimagery of Gucci combining marketing and art, giving new murals to the city. 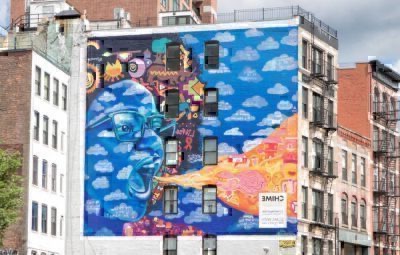 Here we can find several murals. Among the most important are the mural dedicated to Nelson Mandela and the one dedicated to the Syrian archaeologist Al assad killed by the isis for not having revealed where he had hidden some archaeological finds from Palmyra.

Di Zed1, Via Benaco 1, facade of Madama Hostel & Bistrot. The mural depicts a seamstress sewing the symbols of Milan using flags from different states of the world. The message is aimed at expressing the international character of the building that houses it. But this is not the only mural that we can observe, enter for a small relaxing break, to drink or eat a little something and go in search of the minor works inside.

Neighborhood of the nettle: an increasingly emerging area thanks to the redevelopment that has recently undergone thanks to the or.me project (memory nettle) which has led to the creation of 20 works. Here you can see murals commissioned by big names like Fastweb who wanted the work The flowers of Quarto in via C. Pascarella and Porsche with its "Music is a never ending journey”In via Troilo and made with fluo paints and visible even at night.

9. Osgemeos at the Pirelli HangarBicocca

Made by the Brazilian duo on the back of the building and represents a boy climbing the back of a subway car, recalling the past of the structure that houses it. 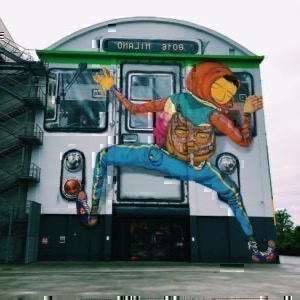 By Iena Cruz, via Viotti: this work can almost be defined as one of a kind, in fact this mural made with special paintings is "eat smog". It is able to purify the air as if it were a forest. With a marine theme, it seeks to combine sustainability and awareness of plastic pollution in our seas.

A tip for sleeping

For true lovers of street art who may come from outside the city, it is possible to stay overnight atNYX hotel near the Central Station where the common areas of its 12 floors are embellished with site-specific decorations by national and other artists such as Moneyless, Sacrative, Skan and the terrace embellished with a femme fatale and the essence of Milan.

add a comment of Street Art in Milan: user guide