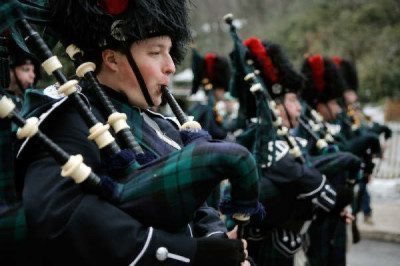 The feast of St. Patrick Day, the most Irish party there is actually is born in America. Right in the city of New York the first parade was born in 1762. Today in America there are many cities where the feast of the saint is celebrated as in the great city of Boston. Right here in 1737 there was the first meeting of the Irish in honor of the saint.

The party initially organized by Irish Protestants little by little it became an exclusively Catholic holiday. In some American cities the party is very much alive today and is celebrated with great music parades but also in the evening in the company of friends, perhaps drinking a beer.

Some American cities literally dress in green by painting the street lines where the parade passes. Other cities, like Chicago tint the green river waters, a phenomenon born a little by chance but which still has a great impact on viewers today.

During St. Patrick's Day it is a must to dress or wear at least one green garment, orange, the color of the British, is forbidden. The clover besides being the symbol of Ireland, it is important because it recalls the concept of the Trinity, with three petals tied to a single stem, explained by St. Patrick to the Irish.

add a comment of St Patrick Day is celebrated in America