Shunga and Japanese art at the British Museum in London 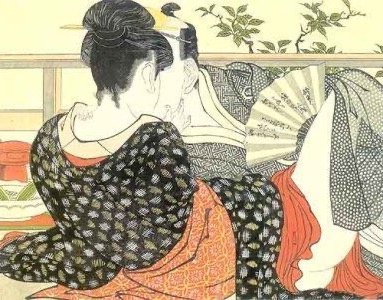 Premise: if you are under 16, unfortunately it will be very difficult for you to be able to see this exhibition, as the British Museum has imposed an age restriction on visitors.

Produced in Japan between the 1600s and the mid 1800s, during a period of total closure of the country to everything from the outside, these paintings were viewed with completely different eyes from those that would be spontaneous to use today.
Shunga literally means "spring painting”And was addressed to men and women of all social classes, by which it was recognized as an artistic form in all respects, not as" entertainment "for a particular type of people.

Artists such as Kitagawa Utamaro and Katsushika Hokusai were celebrated by people from all walks of life, and have also influenced contemporary art forms such as manga, the anime and the Japanese art of tattoo.
These 165 works include paintings, prints and illustrated books and will be on display at the British Museum from 3 October 2013 to 5 January 2014.

For more information about prices and reservations, consult the website of British Museum.

Roy Lichtenstein on display at the Tate in London

Christmas markets in London, all addresses

May in London between bikes and flowers

Christmas lights in London, all the dates of the lighting